AT A GLANCE: Brad Sweet prepared to get back racing at Knoxville May 8 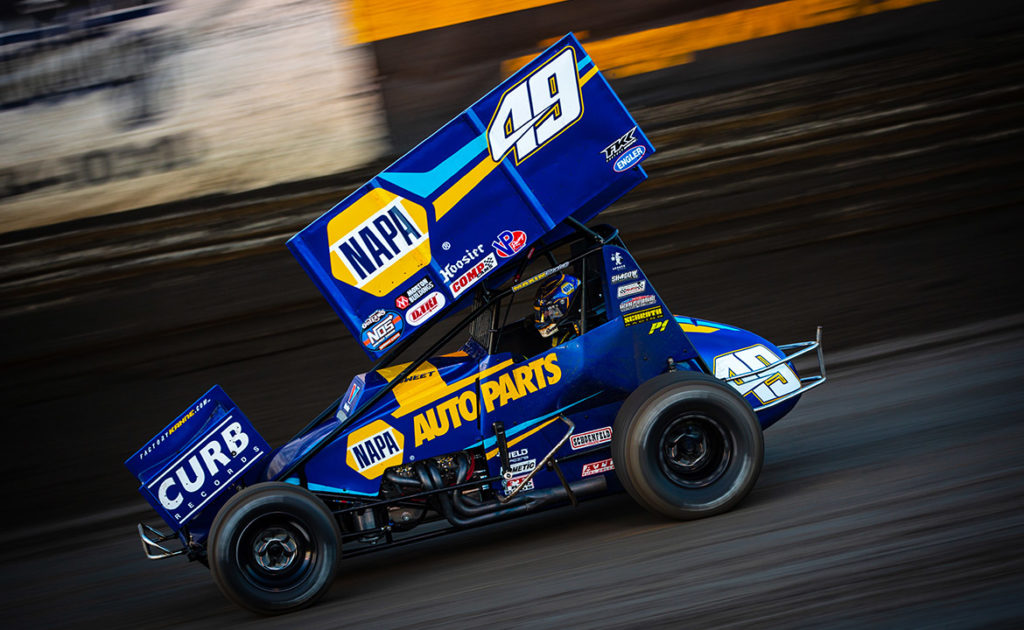 He won the 2019 World of Outlaws NOS Energy Drink Sprint Car Series championship – winning a career high 16 races to do so, including his second Kings Royal victory. He then went on to win several races in Australia during the off season. And when the World of Outlaws season resumed in February, he picked up another win, another DIRTcar Nationals Big Gator title and reclaimed the points lead.

Then the world shut down. Racing went on hiatus for about two months due to COVID-19 – Sweet’s longest time out of a car in a while, he said.

But now, with the Series returning to racing at Knoxville Raceway on May 8, in a participant-only and broadcast-only event on DIRTVision, “The Big Cat” is eager to pounce.

“I’m excited to go back to Knoxville,” said Sweet, who has five wins at the half-mile track, including the 2018 Knoxville Nationals and a win their last June. “Obviously, it’s a great track for us. We love that track. We had a great Volusia. That’s another half-mile. We talked about going with what we’ve been doing. It’ll be nice to get to the track and get a night under our belts. Hopefully it leads to a lot more.”

The reigning champion has stayed busy during the off time, spending time with his family in California, iRacing, watching race videos and learning new things, like the stock market. He tried to keep his regular workout routine to stay sharp for when racing returned and not overdo it so he could still “attack and be ready,” he said.

But while the gym helped keep him in shape, there are other traits like hand-eye coordination and reaction times it doesn’t maintain. iRacing helped keep Sweet sharp in that category. He doesn’t have a sim rig himself, so a friend in California allowed Sweet to use his rig for when he participated in the “World of Outlaws: eDirt Racing Shootouts” on CBS Sports Network. 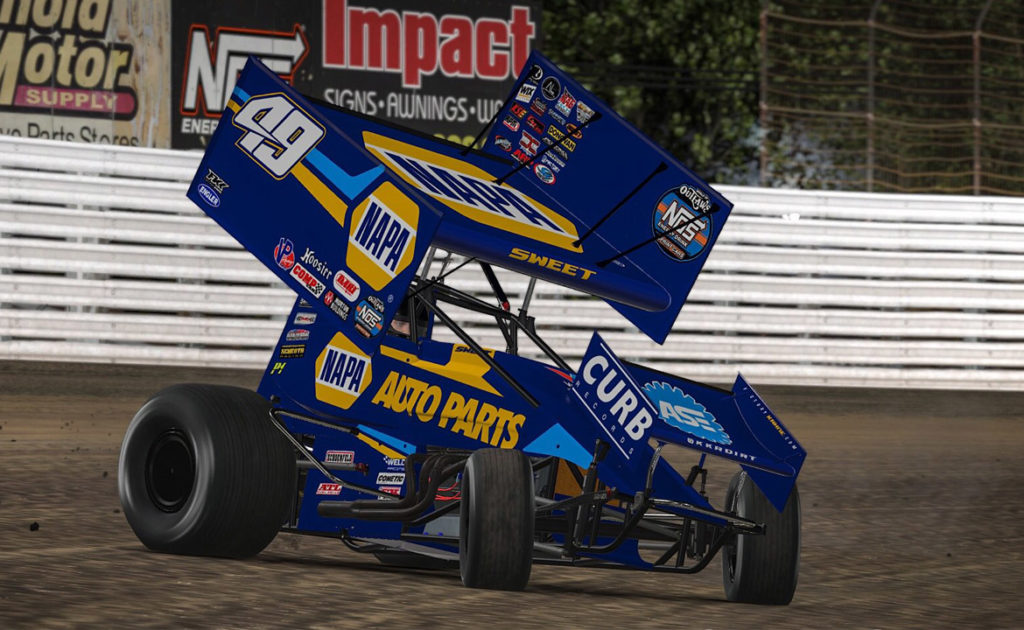 “It’s a whole nother world,” Sweet said about iRacing. “There’s a lot of similarities to real racing and then there’s a lot of things that don’t necessarily transition into what we train ourselves for. You have to put a lot of time into it. There’s a lot of guys that spend a lot of time with their setups and stuff. So, that’s pretty neat to be able to put the time in and be really good.”

Sweet picked up on the virtual racing quick. He finished 17th in his first race, ninth in his second and then battled for the win and finished fourth last week at the virtual Eldora Speedway.

“I had a lot of help,” Sweet said. “Nelson Webster, who lives near me and is a really good iracer, he has a really nice sim rig. He allowed me to come into his house even during these times. Let me use his setups, showed me his lines and worked with me one on one. That’s how I was able to do so much better so much quicker. There’s no way I would have been able to have picked up on it without him.”

While he could use similar racing lines and tactics, he’d use in real life on iRacing, the biggest adjustment was not being able to feel the car through his body. He had to learn to “feel” how his car was handling by watching what it did on the screen and through the sim racing steering wheel. It helped keep him sharp with the use of hand-eye coordination and the competitiveness of each event – something Sweet said was surprised to feel.

“Doing those races, I was up on the edge of my seat and just as nervous as real races at times,” he said. “That was kind of unexpected. You want to keep every skill you have sharp. You can work out in the gym all you want but there’s a whole nother skill set that goes into racing.”

He’s scheduled to compete in the “World of Outlaws: eDirt Racing Shootout” Tuesday, May 12, at 8 p.m. (ET) on CBS Sports Network.

On Friday, May 8 he’ll be back in his real NAPA Auto Parts #49 car, along with car owner Kasey Kahne, who is stepping back behind the wheel of his Karavan Trailers #9 at Knoxville Raceway. With the June races at Knoxville still scheduled, Sweet and his team see this May Invitational race as an extra opportunity to prepare for the Knoxville Nationals in August.

“We love laps at Knoxville,” Sweet said. “Knoxville and Eldora are two of the best facilities and obviously anytime we can get laps at those types of track where the biggest races are it’s a bonus. We’re excited to go to Knoxville and get those laps in. Hopefully still get to go there in June and hopefully get to go there in August. Me and my crew chief were talking earlier, and you can tell in both of our voices that we’re excited to get back to the track. It’s hard to have the NAPA car sitting in the garage knowing that you could be out winning races.”

He and crew chief Eric Prutzman stayed in touch during the down time. However, Sweet admitted over time there was only so much for them to talk about. They already shared the same sentiment. They want to go back racing and go after another championship.

“At a certain point we were getting kind of discouraged knowing we have everything in place, and we were supposed to be out, we feel like, winning lots of races this year,” Sweet said. “It’s been discouraging a little. But we’ve stayed positive and obviously looked forward to the day we get back to the track. We stayed in touch somewhat and obviously with Kasey and all of the crew guys really, they’ve been sticking together and social distancing themselves from everybody else. Still kind of getting some work done around the shop. It’s been tough on them I know, probably even more than me because they’re chomping at the bit at the shop ready to go. Everyone is looking forward to it.”

ABOUT THE TRACK
Knoxville Raceway is a semi-banked half-mile track. The track record is 14.407 sec. set by Brooke Tatnell on May 6, 2006.
Online – KnoxvilleRaceway.com

AROUND THE TURN: The World of Outlaws NOS Energy Drink Sprint Car Series on Friday, May 22, and Saturday, May 23, will race at Federated Auto Parts Raceway at I-55 with a limited crowd and broadcasted on DIRTVision. The first night will be $6,000-to-win and the second night will be $10,000-to-win.