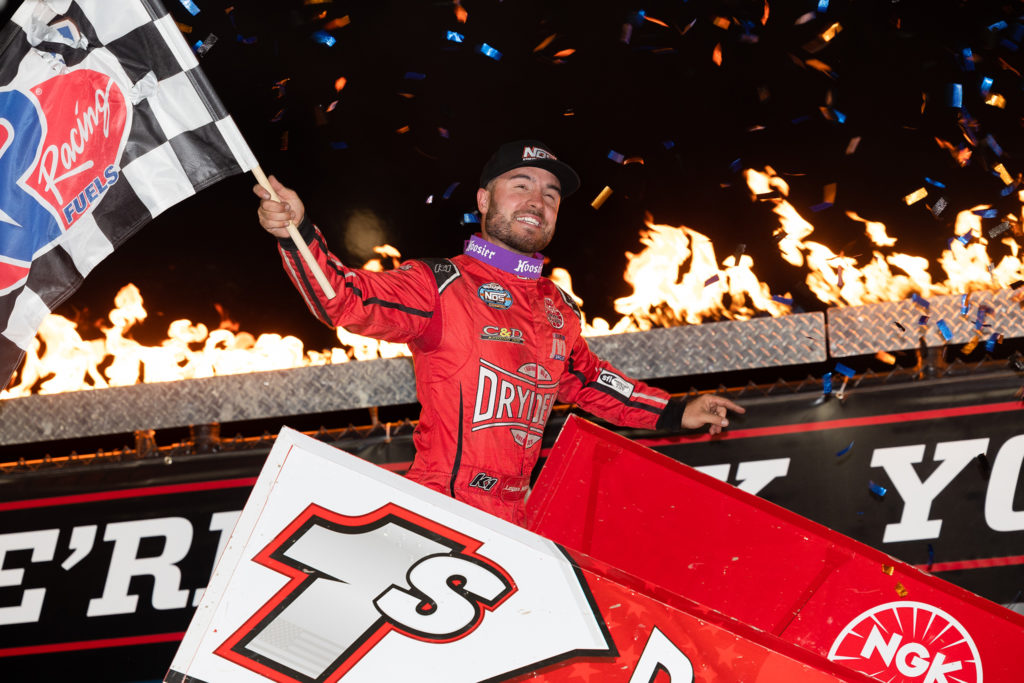 Start with Logan Schuchart and Eldora Speedway, then add in that crisp autumn air of September, and you’ve got a perfect recipe.

The Shark Racing pilot continued his hot streak on Friday night, leading the final nine laps at The Big E and scoring his second-straight BeFour the Crown Showdown victory.

After a tough opening half to the 2021 World of Outlaws NOS Energy Drink Sprint Car Series campaign, the Drydene Performance Products #1S has roared to life over the past month with three wins in the last five races. His stellar stretch has been good enough to propel him into a tie with Sheldon Haudenschild for fifth in the championship standings.

Schuchart’s third-career win at “The House That Earl Built” came with a little help from lap traffic, as he pounced on 10-time Series champion Donny Schatz on Lap 22 and never looked back.

“I thought I could use those holes to my advantage, but I ran through it and I swear the motor felt like it lost two cylinders,” Schuchart said. “I think it ripped two spark plug wires off, so I was worried. I thought David would slide me for sure on that last restart, but we never saw him. Eldora is always in great shape and it was a lot of fun tonight.”

From the jump of the 30-lap NOS Energy Drink Feature, all eyes were pointed to Oklahoma City’s Wayne Johnson, who earned his second pole position of the season.

However, Schatz stole command on the start and cruised away to lead the opening 21 laps aboard the Ford Performance, Carquest #15. Schuchart quickly charged from fifth to second, and then all attention turned to an epic battle for third between Johnson, David Gravel, Tyler Courtney, Ayrton Gennetten, and James McFadden.

The first two stoppages of the race were for championship leader Brad Sweet, who suffered a flat right rear on the Kasey Kahne Racing, NAPA Auto Parts #49 not only once, but twice. He went to the work area on Lap 11 and Lap 22, ultimately crossing the line 19th for his worst finish of the season.

At the front of the field, Schuchart pounced on Schatz thanks to lap traffic and never saw another challenge. A green-white-checkered restart made it interesting, but neither Gravel nor McFadden could pressure the #1S as he scooted away to his sixth win of the season and 29th of his World of Outlaws career in a new Triple-X chassis, which he credits for their revitalized success.

“We just didn’t have the summer we wanted,” Schuchart elaborated. ” We felt like at any moment we’d start clicking, and we really felt like Eldora owed us one after July. We left Kings Royal week bummed out with the results considering how good our cars were. I don’t think we were good in the Dash tonight, but Ron, Ben, Jack & Bill made some awesome changes, and here we are.

“That was so much fun,” McFadden said with a grin. “I told the boys I couldn’t stop laughing in the car it was that much fun. I grew up watching Eldora and watching guys pound it off the fence like that. A bit of redemption after leading laps at the Kings Royal and stepping on my old feller. This team is really clicking right now.”

The Big Game Motorsports #2 made a late charge at Schuchart for the lead, but the final caution on Lap 28 was a caution that David Gravel didn’t want to see as he slipped back to finish third. Ultimately, it was a massive points night as Sweet struggled with two flat tires and Gravel gained 32 points with some of his best tracks on the horizon in the final 10 races.

“Track was slick, but it was great,” Gravel noted. “The holes made it interesting. I don’t think I would’ve won the race, but the caution didn’t help with losing second. Overall it’s a good night to rebound after Hanford. I’m excited for Lernerville tomorrow, one of my favorite tracks.”

After leading the opening 21 laps, Donny Schatz fell back to finish fourth aboard the Tony Stewart/Curb-Agajanian Racing #15. Rounding out the top-five was King Tyler Courtney in the NOS Energy Drink TURBO #7BC, who started his night with a win in the USAC Midget program.

UP NEXT: The World of Outlaws NOS Energy Drink Sprint Car Series now embarks on a long overnight drive to Sarver, PA as Lernerville Speedway hosts the Commonwealth Clash on Saturday, September 25. If you can’t be at the track, you can watch Every Lap LIVE on DIRTVision.