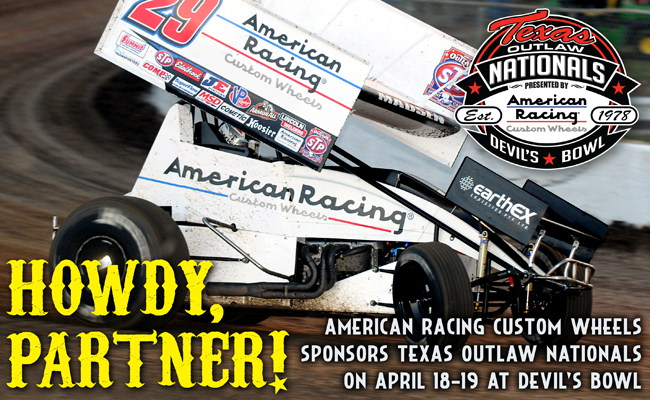 CONCORD, N.C. — April 11, 2014 — The World of Outlaws STP Sprint Car Series has its roots in Devil’s Bowl Speedway, site of its inaugural event in 1978. Today, American Racing Custom Wheels announced it will play a major role in the Outlaws’ return to the unique half-mile dirt oval on April 18-19 in Mesquite, Texas, as a sponsor of the Texas Outlaws Nationals presented by American Racing Custom Wheels.

The two-day event at Devil’s Bowl, where the series last raced in 2003, features a reunion of ‘Original Outlaws’ that helped to launch the series 37 years ago. Two of those drivers, Steve Kinser and Sammy Swindell, became racing legends and are still competing today for the World of Outlaws STP Sprint Car Series championship. Like those drivers, American Racing Custom Wheels has been an iconic brand among car aficionados around the world for decades so bringing the two together at Devil’s Bowl Speedway is a perfect fit.

“We are obviously very involved with the World of Outlaws, and when the opportunity to be directly involved with the Texas Outlaw Nationals was presented we knew our historic wheel brand would be the perfect partner to a storied group of racers and their reunion,” said Dan Ricehouse of American Racing Custom Wheels. “We are looking forward to being part of such a big weekend.”

“There will be so much history at Devil’s Bowl it’s only natural a company like American Racing Custom Wheels is part of it,” said World of Outlaws CMO Ben Geisler. “The Texas Outlaw Nationals presented by American Racing Custom Wheels will certainly be a ‘can’t miss’ event for fans because we’ve already seen how the racers that make up the foundation of the sport are embracing it. We are definitely looking forward to seeing so much history on display.”

American Racing is an iconic brand and a wheel industry leader in craftsmanship, engineering, innovation and performance. Founded in 1956 as a manufacturer of bespoke magnesium and aluminum racing wheels, its roots date back to the golden era of hot rodding. American Racing is a Wheel Pros brand. Wheel Pros products are sold worldwide in more than 20 countries on four continents and through a U.S. network of more than 25,000 authorized dealers. It is one of the world’s largest suppliers of branded custom wheels, performance tires and related accessories for cars, SUVs and light trucks.