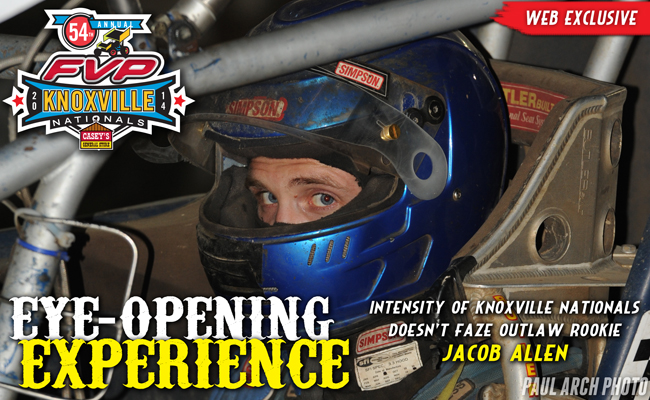 Opposite Ends of the Spectrum

KNOXVILLE, Iowa – Aug. 6, 2014 – This time every year on the World of Outlaws STP Sprint Car Series circuit drivers’ nerves are frayed, the distant glare in their eyes reveals deep concentration, their level of intensity reaches its peak. On Saturday night, there’s $150,000 on the line in the FVP Knoxville Nationals presented by Casey’s General Stores.

So on Wednesday, when rain refused to relent at Knoxville Raceway forcing officials to turn Thursday into a doubleheader of qualifying features, it just added to the anxiousness of those who had already pitted in the infield.

Crews milled about, hoping the wet weather would cease for the evening before rolling cars out of their transporters. Pitted right in the middle was Shark Racing, the team owned by 1990 Knoxville Nationals champion Bobby Allen and featuring Outlaw rookie contenders Logan Schuchart, his grandson, and Jacob Allen, his son.

While Donny Schatz takes aim at his eighth Knoxville Nationals victory this week, 20-year-old Jacob Allen was trying to remain calm about making his second start in sprint car racing’s richest week. He was playing the guitar in the passenger seat of the team’s toter. It seemed like an odd way to ease nerves.

The guitar aside, this season has been all about new experiences for the Kevin Gobrecht Rookie of the Year contender from Hanover, Pa. While Schatz, Daryn Pittman, Paul McMahan, Joey Saldana, Kerry Madsen and the veteran World of Outlaws STP Sprint Car racers chase a series championship, Allen is focused on learning.

In his first Knoxville Nationals last season, Allen was close on his qualifying night to making the A-main, but with little seat time for experience at the famed half-mile oval he was passed by five-time Outlaw champion Schatz in his heat for a transfer position.

“I felt really strong last year during the qualifying race,” Allen said. “I just hope to escalate from that experience and take everything I’ve learned from running the Outlaw tour and the experience I got from running at Knoxville and make a pretty good performance out of it.”

Not many people believed the Shark Racing team would be here. Not many gave them a chance to make it from Florida to California to Pennsylvania to Iowa, but they’re here and ready to compete, not worried about how to beat Schatz, who has finished first or second in 12 of his 16 Knoxville Nationals A-mains.

“You’ve got to worry about yourself, you can’t duplicate what Donny’s doing over in his pit,” Allen said. “The only thing you can do with those guys is go up and talk to them for information to see if you can learn something, or if you get in a hot lap session with those guys, you get behind them and follow them around. If you’re curious, watch the guys who have done well in the past, watch them drive around the track. You can really learn a lot from them.”

Allen is hoping the culmination of his experiences during his first year on the road with the World of Outlaws STP Sprint Car Series this season will have him ready when cars finally hit the track on Thursday night.

“You just take every race one at a time and you just keep going,” Allen said. “You know you’re on the Outlaw tour, but anything could happen. One night me and Logan could wreck and that could end it right there, so you just take it all in and just be grateful we’re still out here for this long. We made it from the west to the east, done all these races and learned everything we could because anything could take it away in two seconds.

“You just got to be grateful for what we’ve learned and what we’ve experienced and everything we’ve been doing because not everybody gets to do that, and not everybody gets to do it with their dad and the people they grew up with. I’m very grateful, it’s definitely been the time of my life, and it’s definitely taught me a lot as a person and as a racer. It’s been really cool.”

On Thursday night, Allen hopes to put down the guitar and pick up an A-main appearance, and maybe even lock himself into Saturday night’s main event. It’ll definitely be another learning experience.