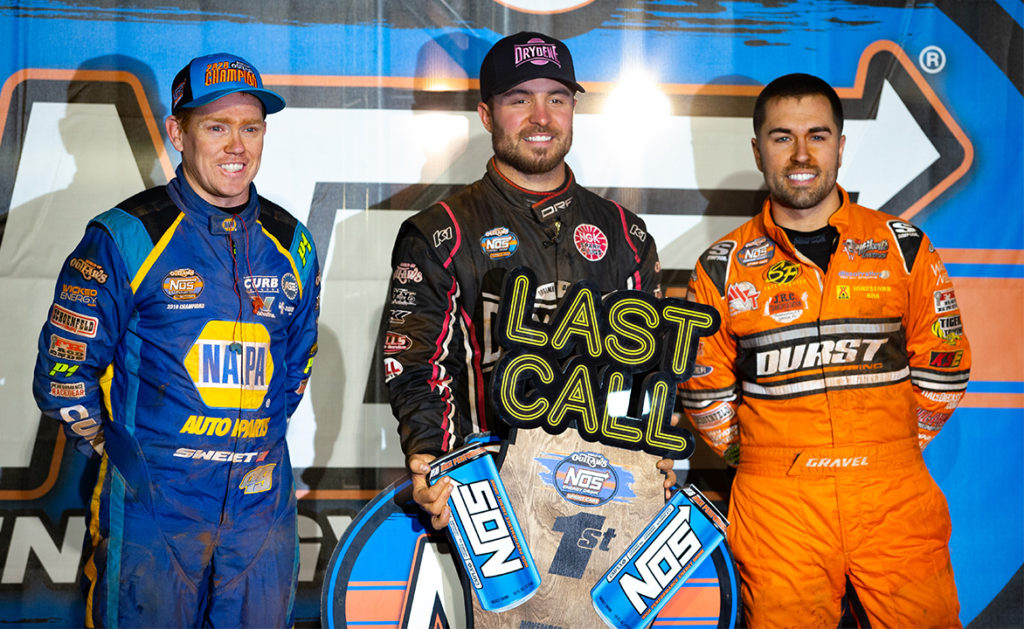 Logan Schuchart, of Hanover, PA, jumped from 33rd to 25th on the all-time wins list with his seven victories – including his win during the season finale at The Dirt Track at Charlotte. He now has 23 career wins and is seven away from tying his grandfather, Bobby Allen, for 20th on the list.

“To end the World of Outlaws season with a win is awesome,” Schuchart said. “Just got to thank my grandfather for everything that he has done and given me this opportunity; be here with all of these great people; race this thing; race for wins and be a part of the greatest racing, in my opinion.”

Topping everyone for the most wins this season was Kyle Larson, of Elk Grove, CA. He visited Victory Lane 12 times, bringing him to 20 career wins and tying him for 28th on the all-time wins list with Greg Hodnett.

Aside from Kyle Larson, Sheldon Haudenschild, of Wooster, OH, was arguably one of the best drivers in the back half of the year. He won a career high seven races in a single season from July to November, including an emotional hometown win at Wayne County Speedway.

Haudenschild entered the year with seven wins and now sits 35th on the all-time wins list with 14.

“To have (Crew Chief Kyle) Ripper back has meant the world to me,” Haudenschild said. “He’s the man. He’s got it figured out. Just so glad to have him back. And to have (crew members) Nickolas (Goodfleisch) and Drew (Brenner). We’re brothers. I’d do anything for them three and I know they’d do the same for me. Just very grateful to be in this NOS Energy Drink car. It’s a once in a lifetime opportunity for a 27-year-old from Wooster.”

Carson Macedo, of Lemoore, CA, Parker Price-Miller, of Kokomo, IN and James McFadden, of Warrnambool, VIC, AUS, each added one more victory in the “W” column to advance their rank. Macedo is now tied with four other drivers for 53rd with six career wins, while Price-Miller and McFadden entered the two wins club with 17 other drivers.

After a year of no first-time winners, 2020 saw two – Carson Short and Jacob Allen. Both won in dominating fashion with Short, of Marion, IL, leading all 30 laps at Tri-State Speedway and Allen, of Hanover, PA, leading all 30 laps at Dodge City Raceway Park. Short’s win came in his 11th Feature start and Allen’s first win came after 358 starts of wondering when it would happen.

While 10-time Series champion Donny Schatz, of Fargo, ND, didn’t advance his rank on the list, he closed in on a significant milestone. His five wins this year have brought him one victory away from claiming a milestone 300 career wins. The only two drivers ahead of him on the wins list are three-time champion Sammy Swindell with 394 wins and 20-time champion Steve Kinser with 690 wins.

“This sport owes me nothing,” Schatz said. “I feel like I’ve contributed to it for a long time. I’ve won the things I’ve wanted to win, and I want to continue to win as much as I can.”

This year was the first time since 2011 that he didn’t end the season with double-digit wins. However, he did earn a history setting sixth National Open title at Williams Grove Speedway.

A couple of weeks after announcing he would step away from full-time World of Outlaws racing at the end of 2020, Pittman, the 2013 Series champion, earned a home state victory at Lawton Speedway. It was his sole win of the year and his 86th career win overall. He remains ninth on the all-time wins list – two wins ahead of his racing idol Stevie Smith.

“To win [at Lawton Speedway] with as many friends and family, people that have supported me for 25 years, honestly some of them longer than that, honestly means more than anything,” Pittman said.

Stewart was ready to hang up his helmet at the beginning of the year after a tough 2019 season that left him without a full-time ride. However, he ended up needing it quite a bit. He ran 32 World of Outlaws events with five teams and won with two of them. His first win of the season came at Williams Grove Speedway with the Indy Race Parts team and his second was at Lakeside Speedway in his debut with Jason Johnson Racing. The two victories brought Stewart to 36 career victories, which keeps him placed 19th on the list.

The all-time wins list will be adjusted again when the World of Outlaws NOS Energy Drink Sprint Cars’ 2021 season kicks off Feb. 5-7 at Volusia Speedway Park for the 50th DIRTcar Nationals. For tickets, click here.