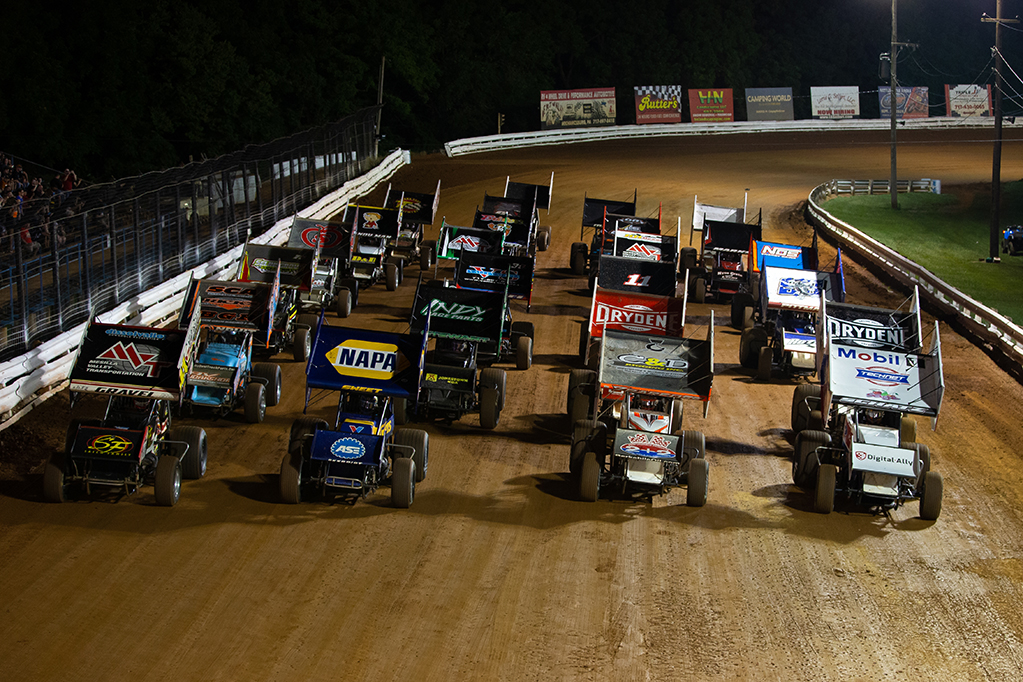 It’s the biggest rivalry in Sprint Car Racing: The PA Posse vs. The World of Outlaws.

The greatest band of full-time drivers traveling the nation against the most prideful and passionate set of local racers. The Outlaws want to come in and steal in the loot, but the Posse take defending their porch to the next level.

In 2021, the World of Outlaws NOS Energy Drink Sprint Car Series will make 11 appearances in Pennsylvania, and it all starts next month.

On Wednesday, May 12, The Greatest Show on Dirt rolls into Abbottstown, PA for a one-night only event at Lincoln Speedway. Labeled the Gettysburg Clash presented by Drydene Performance Products, this $10,000-to-win mid-week special marks the 49th Outlaws / Posse soiree at Lincoln.

A one-day break ensues before the Morgan Cup fires off on Friday & Saturday, May 14-15 at Williams Grove Speedway. The iconic Mechanicsburg, PA 1/2-mile will reach a milestone 220th World of Outlaws event during the finale, which offers a $17,000-to-win prize.

One of the eight tracks to grace the schedule during the Outlaws’ inaugural year in 1978 and still hold races today in 2021, Lincoln’s history ranges far and wide with some holes in between. It started in year one when Steve Smith swept four shows over seven nights to shoo the Outlaws from his home turf.

The Abbottstown 1/4-mile was a yearly tradition until 1999, when a 14-year dormant period began. In 2012, the track returned to Outlaw competition with a hot start for the Posse as Danny Dietrich of Gettysburg stood tall with the first two of his five-career World of Outlaws win.

In 10 total dates since returning in 2012, the Posse have had the Outlaws’ number with six wins to four at Lincoln. Donny Schatz (2016), David Gravel (2017) and Sheldon Haudenschild (2020) are the only full-time Outlaws to beat the Posse of late.

The competition has been stout in one month of local competition at Lincoln this year. Through seven races, six winners have risen to the occasion with Aliquippa, PA’s Tim Shaffer being the only repeat winner in the Heffner #72. Danny Dietrich, Billy Dietrich, Alan Krimes, Jim Siegel & Tim Wagaman also have wins.

“We definitely take a lot of pride in defending our state,” Danny Dietrich said. “The World of Outlaws are the best in the country, but we’ve still got the best local scene of all 50 states. I think that’s why it is always so amped up when they roll into town. They want to beat us, but we want to beat them more. They bring in a little extra money and more glory, which is always nice too.”

Transitioning to the Morgan Cup on May 14-15, Williams Grove Speedway will continue to stretch its advantage as the most-visited track in World of Outlaws Sprint Car Series history. Along with Iowa’s Knoxville Raceway, they’re the only two tracks to host World of Outlaws events every single year since the inception of the Series in 1978.

For Dewease, a win in next month’s two-night Morgan Cup would prove especially meaningful if he goes winless at the half-mile until then. As of now, the 55-year-old legend from Fayetteville, PA owns 99 career wins at Williams Grove, which is good enough to be the all-time leader over Fred Rahmer (90) & Greg Hodnett (73). However, win #100 being against the Outlaws sure would be special.

Some of the other local stars that have turned in strong performances in 2021 include winner Freddie Rahmer, Brandon Rahmer, Dylan Cisney, T.J. Stutts, Chase Dietz, and Steve Buckwalter, among others.

“It’s hard to put that place into words,” Zearfoss, a native of Jonestown, PA said. “It’s just so special. I mean they’ve been racing Sprint Cars for almost a century soon. Williams Grove just has so much history, and especially with the Outlaws. I’ll never forget my first win there in 2017. Hopefully we can get another one next month.”

As strong as they are, the PA Posse still went winless in 2020 against the Outlaws. They had nine chances between Lernerville, Williams Grove, Lincoln, and Port Royal, but loss all nine of them. It was the first time they were shut out on their home turf since 2008.

With that as motivation, they’ll be sure to come out of the gates swinging when the 2021 chapter of Outlaws vs. Posse begins.

Still a month away, Brad Sweet currently leads the World of Outlaws championship standings in pursuit of his third-straight title in the Kasey Kahne Racing, NAPA Auto Parts #49. The Big Cat is currently being chased by Sheldon Haudenschild (-92), David Gravel (-98), Carson Macedo (-110) and Logan Schuchart (-110).