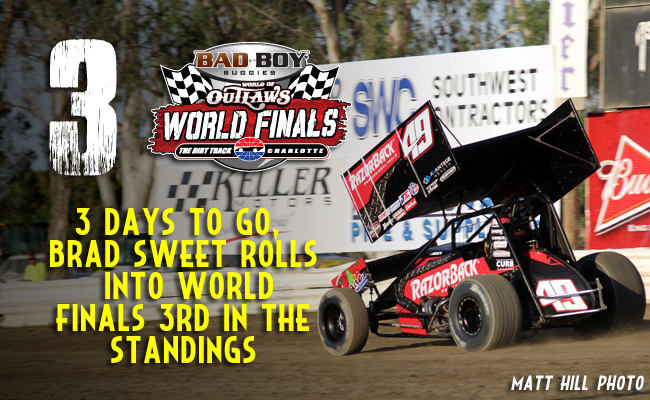 Being named the Kevin Gobrecht Rookie of the Year comes with the expectation to compete among the best and beat the best. For the 2014 rookie of the year recipient, Brad Sweet, it was a challenge he proved he was up to in 2015.

Sweet fired the opening shot of his season early, winning on night three of DIRTcar Nationals at Volusia Speedway Park.

““It’s always good to start off with a win,” Sweet said “These races are tough to win. I mean you can win the first race out and not win another one the rest of the year, to get the first one under our belt this quick and feel this good with our car and get a new team together like this and be fast out of the gate quick is a good sign.”

After podium finishes in Tucson and at Thunderbowl Raceway, Sweet once again returned to victory lane as the series invaded Northern California.

On the first night of the Wine Country Outlaw Showdown at Calistoga Speedway, Sweet, Rico Abreu and Joey Saldana fought a thrilling battle. When the dust settled, it was Sweet in victory lane claiming an emotional victory in front of friends and family.

When the series got back to the Midwest in the middle of the summer, Sweet and his Kasey Kahne Racing with Mike Curb team found steady consistency.

With an I-96 Speedway that looked more like it belonged in California than in Michigan, Sweet held off a hard charging Donny Schatz and drove to his third win of the season.

“It was a tricky track tonight,” Sweet said that night. “I got a terrible restart and I think I just got really mad and got my elbows up. I had a win it or wear it mentality. The (No.) 15 has been making it tough on everyone out here and we all have been fighting and clawing to try to figure it out. We still have a lot of work to do to beat Donny (Schatz), but tonight we were able to get the Ollie’s Bargain Outlet car in victory lane and it feels really, really good.”

As new crew chief Lee Stauffer came on board with the number 49 Razorback Professional Tools car late in the season, Sweet and his team continued to find success with four top-five runs in the six race west coast stretch.

In the final trip to the Upper Midwest, Sweet again met a familiar foe and parked it on the front stretch. At Deer Creek Speedway Sweet again held off Schatz and picked up his fourth series win of the 2015. He stood in victory lane again at Port Royal Speedway.

Through a long season Sweet and his team of Lee Stauffer, Austin Weinrich and Rob Beattie continued to build their program and find the success in the present while looking to the future.