2020 MEMORIES: Reliving the best World of Outlaws Sprint Car moments of the year 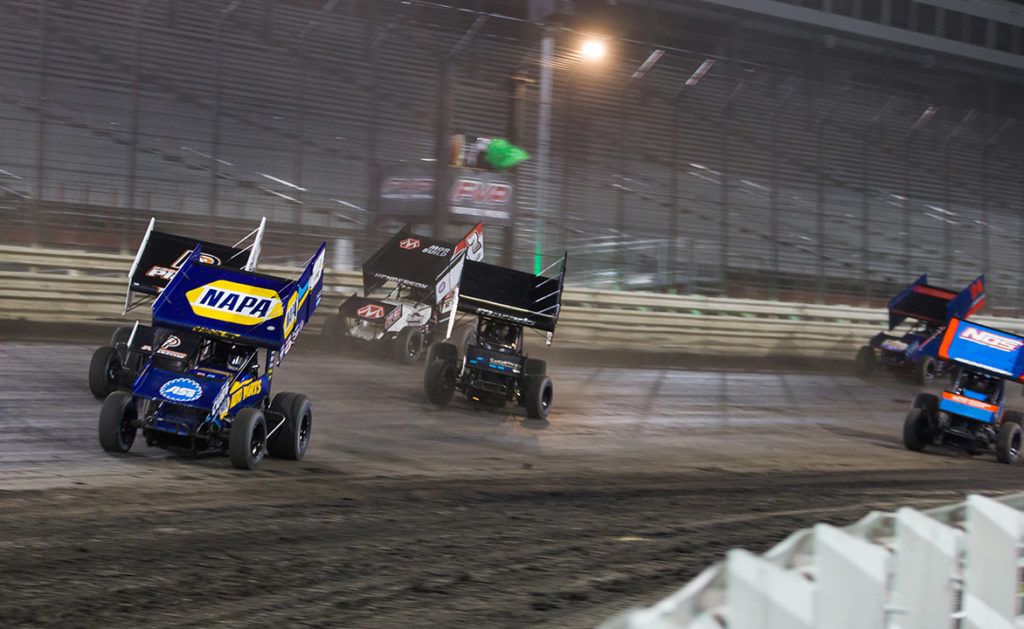 This year provided several reasons to get excited about the 2021 World of Outlaws NOS Energy Drink Sprint Car Series tour.

From action-packed races that earned on a spot on the “greatest races of all-time list” to rising stars solidifying their place in World of Outlaws history, the Series managed to make the most out of 2020 and provide an exceptional year of racing.

Here are some of the top moments from the 2020 season:

iRACING TO THE RESCUE: When racing had to pause due to COVID-19, virtual racing, through iRacing, became the new normal for two months. The stars of the World of Outlaws competed against the likes of NASCAR champions, NHRA champions, a Formula 1 winner and weekly racers on DIRTVision each week.

With no racing or sports, in general, going on, the virtual racing series became a prime source of entertainment and was eventually broadcasted on FOX Sports and CBS Sports Network. From emotional wins like Kevin Swindell’s victory at the virtual Knoxville Raceway – where he had an accident that ended his real-life racing career – to thrilling finishes like Logan Schuchart’s charge to win at the virtual Eldora Speedway, the iRacing series provided a much-needed sense of normalcy for everyone.

All the races can be found in the DIRTVision vault.

RETURN TO RACING: After the racing world shut down for two-months due to COVID-19, the World of Outlaws NOS Energy Drink Sprint Car Series made its triumphant return May 8 at Knoxville Raceway with no fans in attendance.

While it was quiet, it was still thrilling for everyone watching on DIRTVision at home with Ian Madsen and David Gravel battling like they were going after a Knoxville Nationals victory. In the end, Gravel made a power move underneath Madsen with two laps to go and claimed the historic win.

“We don’t really feel how many people are watching, maybe tens of thousands of people are watching tonight (on DIRTVision) and hopefully that was a good race for everyone to get their blood pumping again,” Gravel said in Victory Lane. “Me and Ian just battled and battled… It’s just good to get back in a race car and be competitive.”

GIBSON 2000: Another historic moment was commemorated at Knoxville Raceway when the Series returned to the Iowa track in June. Johnny Gibson “The Voice of the World of Outlaws” worked his 2,000th consecutive World of Outlaws event.

From selling programs to becoming the Series announcer, Gibson hadn’t missed working a World of Outlaws event for 25 years.

“It’s really kind of special just for the fact that it’s been so long,” Gibson said. “You go back to 1995, the last time I missed an Outlaw race in New York. I think it says a lot about my love for the job. I am so fortunate to get to see the greatest Sprint Car drivers in the world and talk about them night and night out. As basically, someone who is just a race fan, I am the luckiest person in the world.” 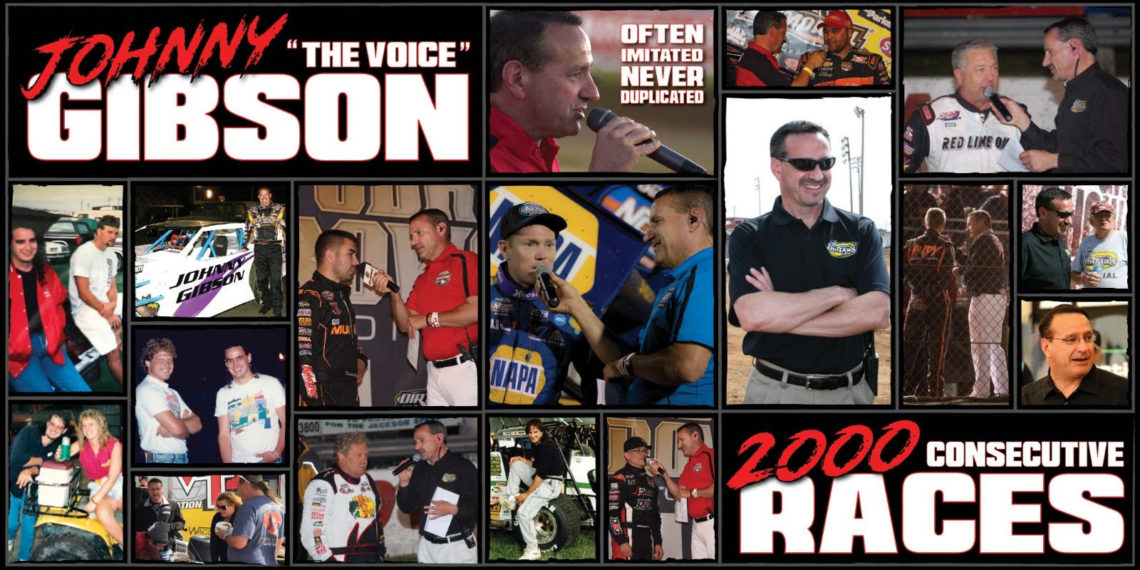 CBS SPORTS LIVE: The World of Outlaws NOS Energy Drink Sprint Car Series returned to live television on June 20 when CBS Sports broadcasted the second night of a doubleheader event at Tri-State Speedway. Carson Macedo and reigning champion Brad Sweet dueled for the win in the final laps with Macedo edging his fellow Californian by 0.064 sec. for the win.

The Series was again live on CBS Sports for the July 4 Independence Day Spectacular, which saw the return of full grandstands, due to state-of-the-art COVID testing systems, and Brad Sweet picking up the win.

EPIC LERNERVILLE BATTLE: In a battle that will go down as one of the greatest of all time, 10-time Series champion Donny Schatz, reigning champion Brad Sweet and Kyle Larson waged a war of slide jobs throughout the July 21 40-lap Silver Cup event at Lernerville Speedway, trading positions almost every lap.

Schatz was third coming to the white flag but got a run around the outside of Larson down the front stretch to claim second by the flag stand. He carried that momentum to the first turn and fired a slide job underneath Sweet. It stuck. He cleared the blue #49 car and drove away with the thrilling victory – his third of five for the season.

RIVER CITIES RUMBLE: One race that will stay etched in fans’ minds for generations is the Aug. 21 event at River Cities Speedway. The unforgettable battle between Kyle Larson and Logan Schuchart.

With four laps to go, second-place Schuchart dove into Turn 3, tagged the back of Larson’s car, turning him into the infield, and stole the lead. Larson kept his foot in the throttle, drifting his way out of the grass and back onto the track off Turn 4. He then went into hyperdrive. On the final lap, Larson went from being half a lap back to on Schuchart’s bumper in one turn. When Schuchart drifted wide off Turn 4, Larson cut his white #57 under the Drydene car and darted ahead to claim the win.

ALLEN’S FIRST WIN: After 358 times of having to leave a racetrack wondering when his first World of Outlaws win would come, Jacob Allen finally put the question to rest on Sept. 11 at Dodge City Raceway Park.

After holding off his teammate Logan Schuchart for 30 laps, Allen sent a wave of joy through the racing community when he pulled his Drydene #1A into Victory Lane for the first time.

“So much has gone into it,” Allen said in Victory Lane. “Being so close to just giving up and not wanting to do it, but just to come back this year and take a whole new look on everything and be positive and be cool about it. Finally, this has paid off, and to have Logan second is pretty badass. This is an honor. I’ll never forget this.”

PITTMAN FINDS COMFORT AT HOME: Daryn Pittman, the 2013 World of Outlaws champion from Owasso, OK, went on an emotional roller coaster ride for a couple of weeks in September. Not long after announcing he would be stepping away from full-time racing at the end of the year, it was announced he was parting ways with Roth Motorsports – who he had driven for the past year and a half. Then, Pittman announced he would rejoin Heffner Racing to finish out the season.

Before the ride swap happened, Pittman found solace at Lawton Speedway – his home state track in Oklahoma – by getting his first and only points win of the year.

“When you do it this long, you’re pretty good at tuning everything else out,” Pittman said in Victory Lane. “It’s been a roller coaster few weeks on a couple of fronts. I’m glad to be making new like this, rather than how we have been.”

He ended his run as a full-time World of Outlaws driver with a championship and 86 wins – ranked ninth on the all-time wins list.

IT’S A TIE: David Gravel and Sheldon Haudenschild made history on Sept. 19 at Devil’s Bowl Speedway during the DIRTVision Fast Pass Dash. While racing for the win on the final lap, Haudenschild pulled to Gravel’s outside off Turn 4 and the two drivers drag raced to the line. There, the distance between them was 0.000 sec.

For the first time in the history of the Series – since electronic timing and scoring was implemented – there was a tie at the end of a race. The win was given to Gravel since he was the leader of the previous lap.

.@NosEnergyDrink High Performance Feat: For the first time in series history, we saw a TIE at the conclusion of the @dirtvision Fast Pass Dash at Devils Bowl Speedway between @Haudenschild_17 & @DavidGravel! #LiveNOS pic.twitter.com/4pNvTNa8on

Sweet was able to clinch the driver title – his second in a row – during the penultimate race of the season, beating Logan Schuchart by 46 points and then held off JJR by 24 points the final night to give KKR its third team championship.

“We did everything we needed to do to win the points and get Kasey Kahne Racing the team championship,” Sweet said. “Hats off to our competitors. Logan (Schuchart) gave me a good run for my money all season long and the 41 (Jason Johnson Racing) bunch… nothing but respect from all of us here. Obviously, we want to win and stay on top of the mountain.”

As enthralling as the 2020 season turned out to be, there will be even more to look forward to in 2021, starting with the Feb. 5-7 season-opening 50th DIRTcar Nationals at Volusia Speedway Park. See the full schedule here.

You can get tickets to World of Outlaws events at WorldofOutlaws.com/tix.