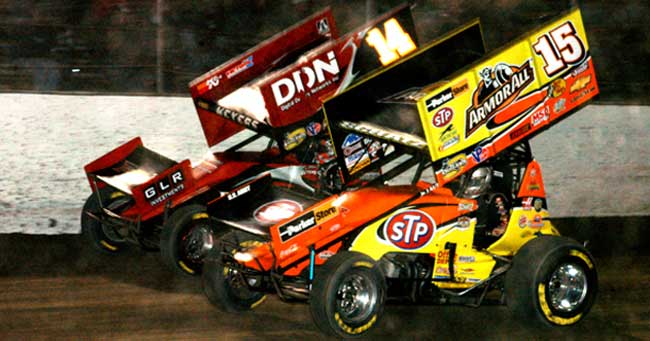 CONCORD, NC — Jan. 27, 2011 — Points. In motorsports, those numbers are what separate champions from the rest of the field. The past two years on the World of Outlaws Sprint Car Series tour, the margin between title contenders has never been closer for a longer period of time.

Those points earned on the first night of the season Feb. 11 at Volusia Speedway Park are just as important as the points that will be earned on Nov. 5 at The Dirt Track at Charlotte in the season finale. Last year at the DIRTcar Nationals by University of Northwestern Ohio, Tony Stewart Racing’s Donny Schatz and Steve Kinser put themselves in the title chase with Jason Meyers, Joey Saldana and Jason Sides by topping the World of Outlaws events during the 12-night kickoff to the 2011 dirt track racing season.

Meyers needs a strong start at Florida to begin his title defense because Schatz and Kinser, with 24 championships between them, know what it takes to win a crown. And nobody will be as motivated as Saldana, who is trying to give car owner Kasey Kahne his first World of Outlaws crown.

All that leads into a breakdown of the Outlaws, by their 2010 finishing order, entering the season opener Feb. 11 at Volusia:

So will Meyers be able to make it two in a row? Can Schatz add a fifth trophy to the display case? Will Kinser get his coveted 21st crown? Or will Saldana, Sides, Dollansky, McMahan or another Outlaw win their first title? The story of the 2011 season begins Feb. 11 at the 40th DIRTcar Nationals by UNOH at Volusia Speedway Park. Tickets are available by calling the event ticket hotline at 386-985-4402 or by clicking the Buy Tickets button at www.DIRTcarNationals.com, the official online home of the DIRTcar Nationals that includes news, directions and lodging information.