2 To Go: Stewart Strong in Year One 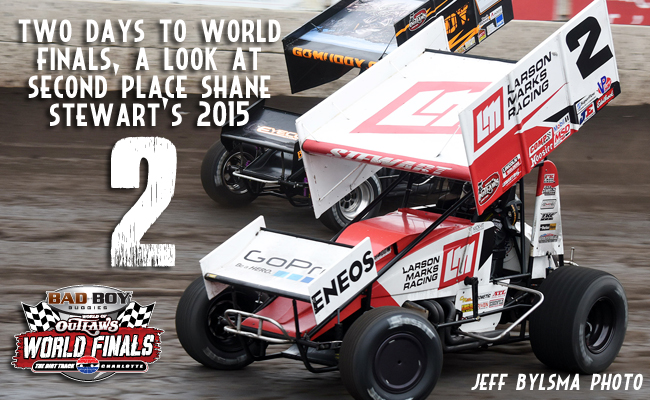 If Shane Stewart had any apprehension about coming back on the World of Outlaws Sprint Car Series tour for the first time in a decade, it didn’t show. The Oklahoma-native and his Larson Marks Racing team shot out front early and stayed on Donny Schatz’s heels all season long.

Along the way Stewart tripled his career wins and won some of the most coveted trophies on the series tour.

Stewart picked up his first win of 2015 at the Dirt Track at Las Vegas and followed that up on the west coast with win number two at Kings Speedway.

In front of a hometown crowd, the Bixby, Oklahoma-native drove to a win at Salina Highbanks Speedway.

“This was one of the tracks that I really, really wanted to win at this year,” Stewart said. “It’s really, really good to win in front of my fans and all my friends and family. I’ve got Jenn and Nixon here with me. It’s a good night.”

Through the spring and summer, Stewart was Schatz’s near constant foil. Where one finished first, the other was very often in a close second.

As the summer heated up and the month of money kicked off, Stewart was on the cusp of one of the biggest wins of his career.

The thirty-second annual Kings Royal at Eldora Speedway got underway after a nearly four hour rain delay. The rain may have put a damper on the night but it didn’t slow Stewart down. Facing Schatz once again, Stewart rode into battle ready for the impending fight.

When he emerged, he was crowned King Shane the 32nd.

“This is an awesome, awesome weekend,” Stewart said in victory lane. “I don’t even know what to say, it’s an unbelievable feeling.”

Stewart didn’t stop there, pushing through the month of money he proved he was the strongest man, winning the Ironman 55.

With crew chief Scotty Martin and crew members Heath Moyle and Andrew Seamans, Stewart and his team entered the 2015 season with a clear mission.  Nearly forty top-five finishes and sixty top-ten finishes have propelled Stewart to his best ever series season and positioned him as a front runner for the 2016 World of Outlaws Sprint Car Series season.