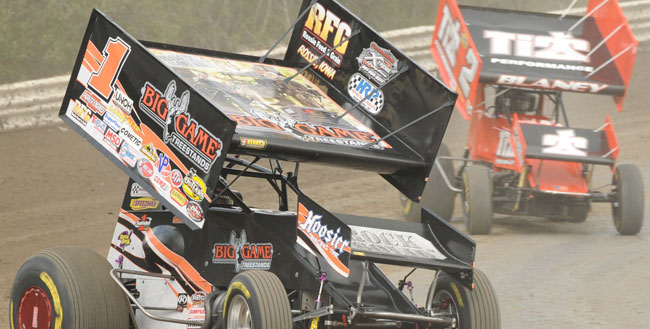 CONCORD, N.C. — Feb. 8, 2013 — The highly anticipated 2013 World of Outlaws STP Sprint Car Series campaign pushes off in a week, embarking on its most ambitious season since 2005.

As the series has 89 races at 57 tracks in 25 states and three Canadian provinces on the current schedule, several milestones will likely be reached on the most prestigious sprint car tour in the world.

Here are 10 of the top milestones that could potentially highlight 2013:

The five-time and reigning champion enters the season one victory away from reaching a feat accomplished by only three other drivers – 125 feature wins. Steve Kinser surpassed the number in 1984, Sammy Swindell in 1987 and Mark Kinser was the last in 2000.

Coming off his second consecutive nine-win season, Dollansky is up to 53 career feature victories. He is only three away from tying two-time series champion Jason Meyers and veteran Jac Haudenschild for 10th on the World of Outlaws STP Sprint Car Series career wins list.

After leading the series with 13 feature wins last season, Swindell is 11 victories shy of reaching 300 career wins. Kinser is the only other driver to achieve that mark. Swindell has recorded at least 11 wins in 14 different seasons on the tour.

It has been eight long seasons since ‘The King’ garnered his record 20th World of Outlaws STP Sprint Car Series championship. No other driver is close to that number of titles. However, only one driver has gone more than three years between championships – Swindell with a 15-year gap.

Following one of the most competitive seasons in the history of the World of Outlaws STP Sprint Car Series, 2013 is set up for another race to the top of the podium. Kinser (20 titles), Schatz (five) and Swindell (three) are the only full-time drivers to earn a championship as Dollansky, Joey Saldana, Daryn Pittman, Kraig Kinser and Jason Sides each have top-five finishes in the standings during at least one season.

With parity at an all-time high, a magical feat that happened only once may strike again. There were four drivers who recorded at least 10 wins in 2000. There have been 11 seasons with three double-digit winners, but with Steve Kinser, Schatz, Swindell and Saldana proven double-digit winners – and Dollansky one win away each of the last two years – lightning could strike for a second time.

A record 23 different winners ended in Victory Lane last season, which was an all-time best. Continuing on the parity path and with the most races scheduled since 2005, it wouldn’t be a stretch to see a new record established for the number of different drivers in Victory Lane. Three of the past five seasons rank in the top five for the variety of winning drivers.

As each season winds down, a champion usually separates himself from the field throughout the end of summer. Last season, five drivers went into the last day in August within 100 points and with a realistic chance at the championship. Should that play out longer, this year might be the first with three drivers separated by double digits.

Closest Finish in the Series History

The closest battle at the end of any season was a 19-point margin in 2009. However, only five times in the history of the World of Outlaws STP Sprint Car Series has the runner up finished within 100 points of the champion. This season could come down to the final lap in the final race.

On the flip side of parity, there is a unique opportunity for a driver to surpass the 11,000-point mark for only the fourth time in the series history. Kinser has accomplished it the three previous times – with more than 30 feature victories per season – and he holds the single-season record of 11,236 points in 1991. However, it hasn’t been reached since 1992.

Any and all of those milestones might be reached during this action-packed season, which begins on Friday, Feb. 15, with the famed UNOH DIRTcar Nationals Presented by Summit Racing Equipment at Volusia Speedway Park.