Event Description
The fireworks will fly around Lawrenceburg Speedway while the World of Outlaws Sprint Cars celebrate Memorial Day in Indiana.

Personal Coolers
coolers are allowed to be brought into the speedway, however they must be 14" or smaller, and you cannot bring in alcohol.

Family Section
Section I No smoking

The traditional Memorial Day Spectacular returned to Lawrenceburg Speedway on Monday night, and yet again lived up to the name in spectacular fashion.

With a star-studded field of 43 World of Outlaws NOS Energy Drink Sprint Cars on hand, the Indiana 3/8-mile capped a sensational weekend of racing in a fashion that only The Greatest Show on Dirt can provide.

Becoming the third different leader in a wild 30-lapper, Sheldon Haudenschild drove to the point on Lap 11 and never relinquished his lead. His Series-leading fifth victory was far from easy, however, as the NOS Energy Drink, Stenhouse Jr. Marshall Racing #17 faced steep traffic and relentless challengers in the closing stages.

The path to back-to-back wins for the Wooster, OH native included a series of three-story sliders across the banking against Logan Schuchart, and a green-white-checkered finish when he survived a hard-charging Kyle Larson on the prowl from 16th-to-2nd.

Sheldon’s 27th career World of Outlaws triumph gives the Haudenschild family 99 total wins with the Series, and inches him closer to Brad Sweet and Kasey Kahne Racing as the #17 continues to prove they’re a legit championship contender in 2022.

“I’m just happy we survived and came out with the win,” a relived Haudenschild said. “I had so many close calls through traffic, those lappers were tough to battle. That’s just normal Lawrenceburg, though. I knew there would be some holes, you just have to run the track smart. More than anything, I just want to thank the men and women and the families who have sacrificed so much that allow us to race on this Memorial Day.”

The most anxious moment of the race was without a doubt the final caution on the final lap, which forced a green-white-checkered. Larson had just moved Paul Silva’s #57 into the second spot with a massive slider on Schuchart and was within striking distance of Haudenschild into turn one when the yellow lights flashed for a slowing Parker Price-Miller.

With only two laps left, a nearly sold-out crowd at Lawrenceburg knew anything could happen with Haudenschild, Larson, and Schuchart lining up 1-2-3 as the green flag flew. Ultimately, Larson’s plan to disrupt Haudenschild never had a chance to play out as Schuchart shot a big move at the #57 and stole his momentum allowing the #17 to check out and seal the deal.

“I knew Larson would be coming,” Sheldon said. “I looked at the board and kept seeing the #57 creeping up toward the top. That was a fun little cat and mouse game I had with the #1S. It seemed like however would get the run was going to come out on top, so I knew I couldn’t slide across turns one & two, I needed to carry that speed down the backstretch.”

Although his impressive run fell short, a 16th-to-2nd bid was nothing for Kyle Larson to hang his head about. The reigning NASCAR Cup Series champion and two-time World of Outlaws winner in 2022 completed 620 miles in Charlotte last night and quickly made the trip to Lawrenceburg for one of his favorite races on the Sprint Car schedule.

The Elk Grove, CA native had a plan to attack Haudenschild on the last lap, but the caution flew and ruined all timing. He had one final opportunity on the final restart, but Schuchart’s daring move stopped any shot of stealing it away. His +14 performance is the third-biggest gain for any KSE Hard Charger this season.

“It would’ve been hard to beat Sheldon on a green-white-checkered in clean air anyways,” Larson said on the final restart. “I really didn’t need that last caution, because I was setting him up into turn three at the checkered flag to make my move. It was a fun race, though. I always love coming to Lawrenceburg, it was rough and wavy in the corners. It just has so much character. I needed a better start to the night in qualifying and things might’ve been different.”

Rounding out the podium with another strong performance was Logan Schuchart and Shark Racing. He led Laps 4-11 before ultimately finishing P3 in the DuraMAX Oil, Drydene Performance Products #1S. Although it wasn’t that desired win, it’s another stellar finish in a long line of impressive results for the team.

“I had a chance right before Kyle got by me, but I stuck to the bottom and should’ve slid up,” Schuchart said on his shot to win it. “I’m just proud of this group of people and how fast we’ve been lately. It’s great to be on the podium, but I need to get this thing in victory lane soon. It feels so close, but so far away at the same time.”

Closing out the top-five at Lawrenceburg was David Gravel in the Big Game Motorsports #2 and Spencer Bayston in the CJB Motorsports #5. Finishing out the top-10 on Monday was Giovanni Scelzi, Brad Sweet, Cole Macedo, James McFadden, and Jacob Allen.

Jonestown, PA native Brock Zearfoss controlled the first three laps before he hit the wall and slowed with suspension damage to the Moose’s LZ Bar & Grill. It was a heartbreaker for the World of Outlaws sophomore runner, chasing his second-career win with the Series and first since his inaugural score in 2017.

UP NEXT (Fri) – The World of Outlaws NOS Energy Drink Sprint Car Series takes to the Dakotas this weekend with stops at River Cities Speedway in Grand Forks, ND on Friday, June 3, and then Huset’s Speedway in Brandon, SD on Sunday, June 5. Fans can BUY TICKETS HERE, or watch every lap LIVE on DIRTVision. 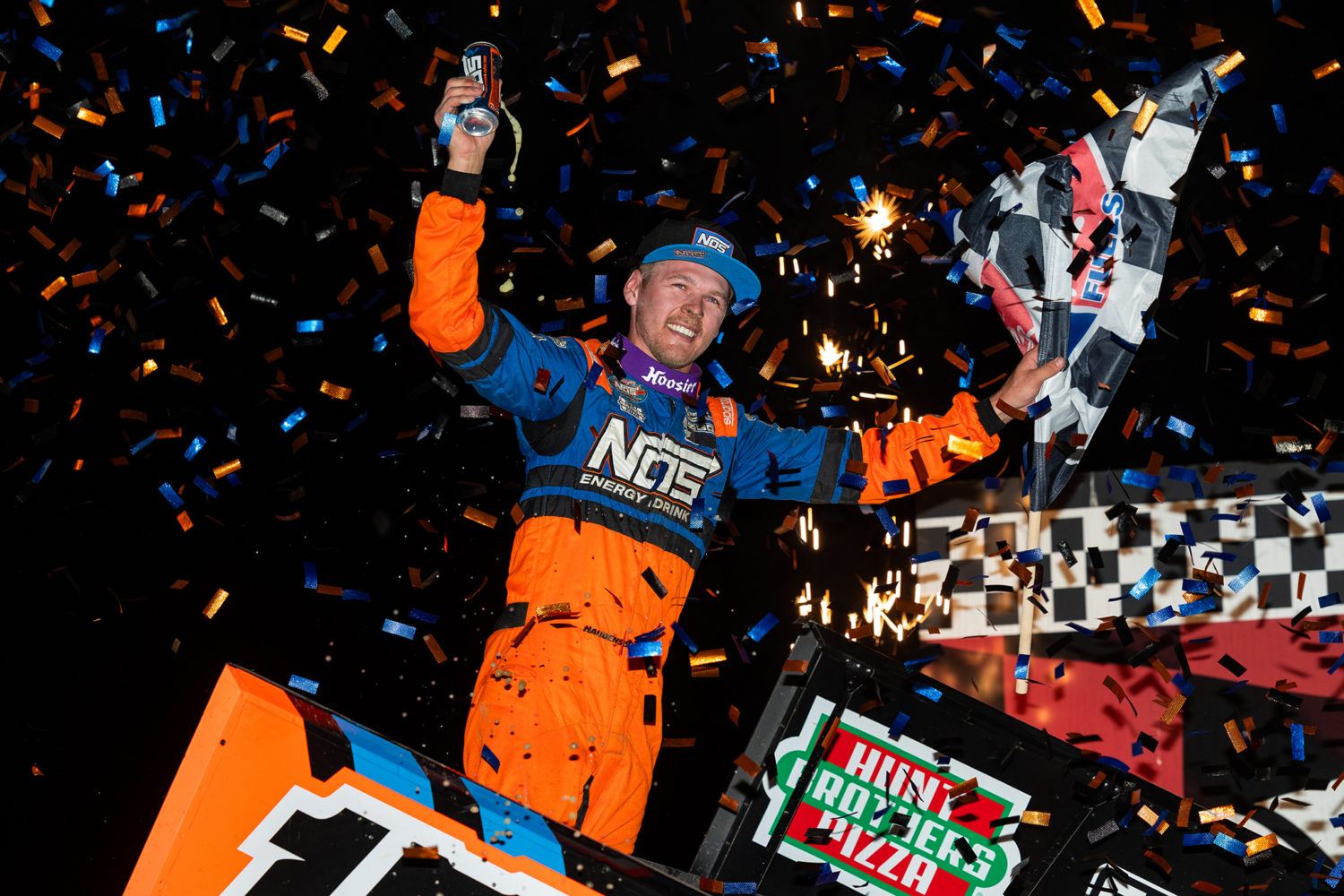 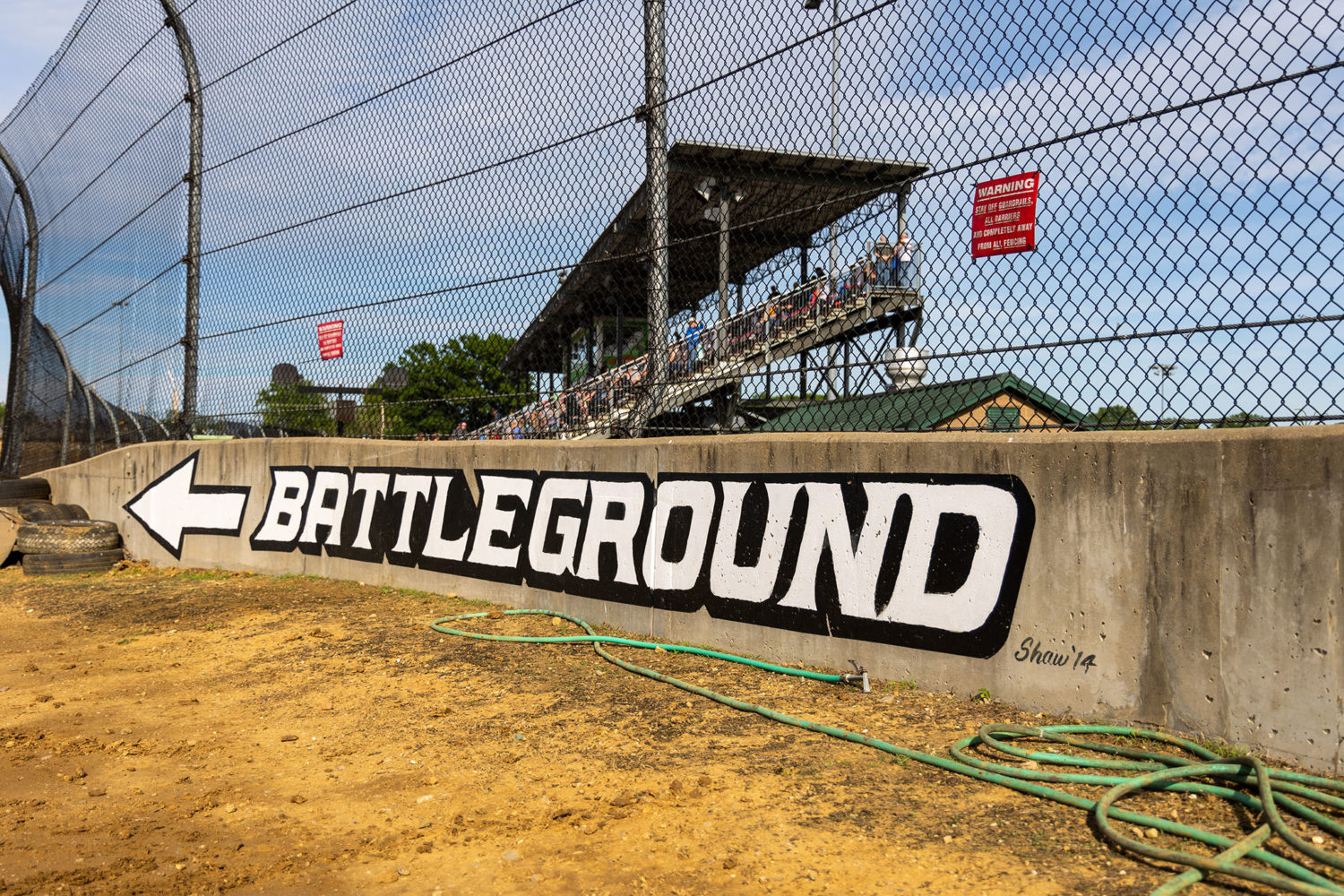 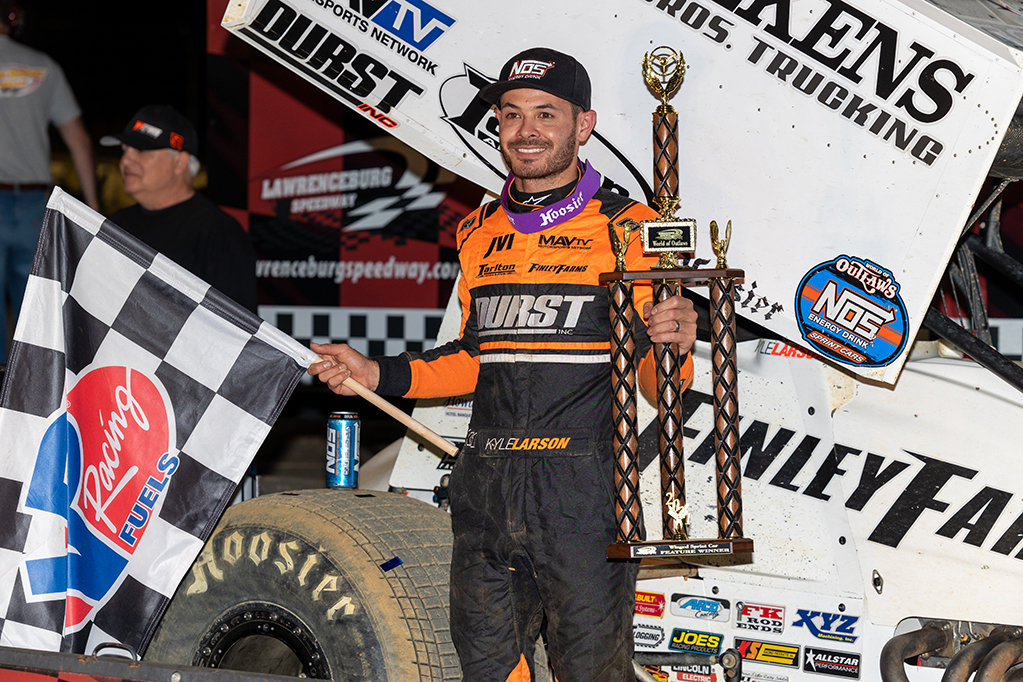 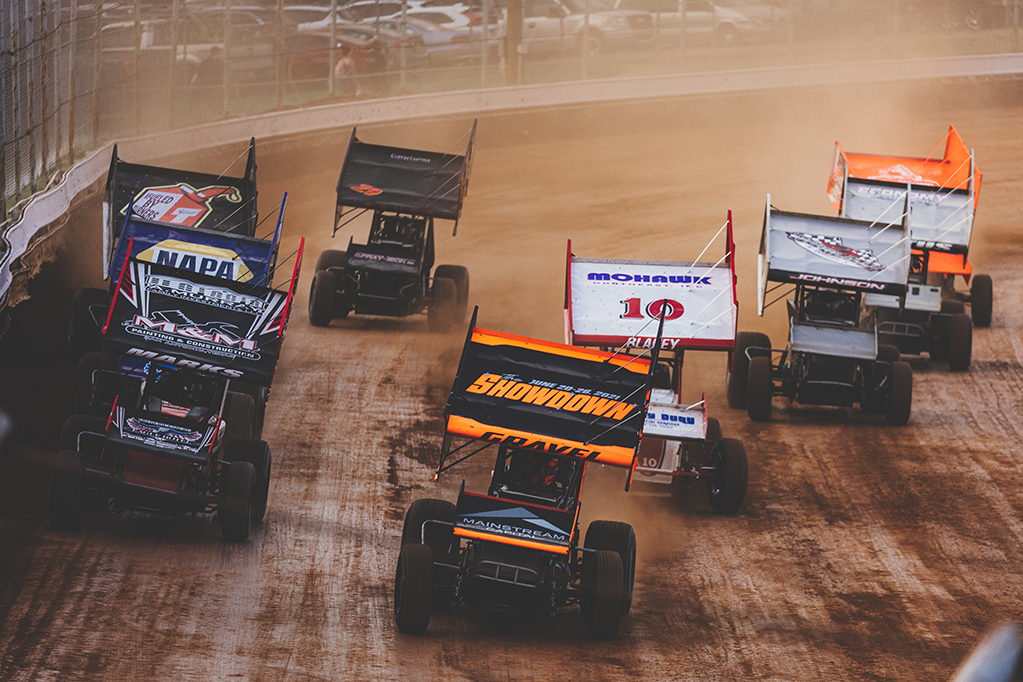 WHAT TO WATCH FOR: Outlaws Invade Indiana’s Terre Haute & Lawrenceburg 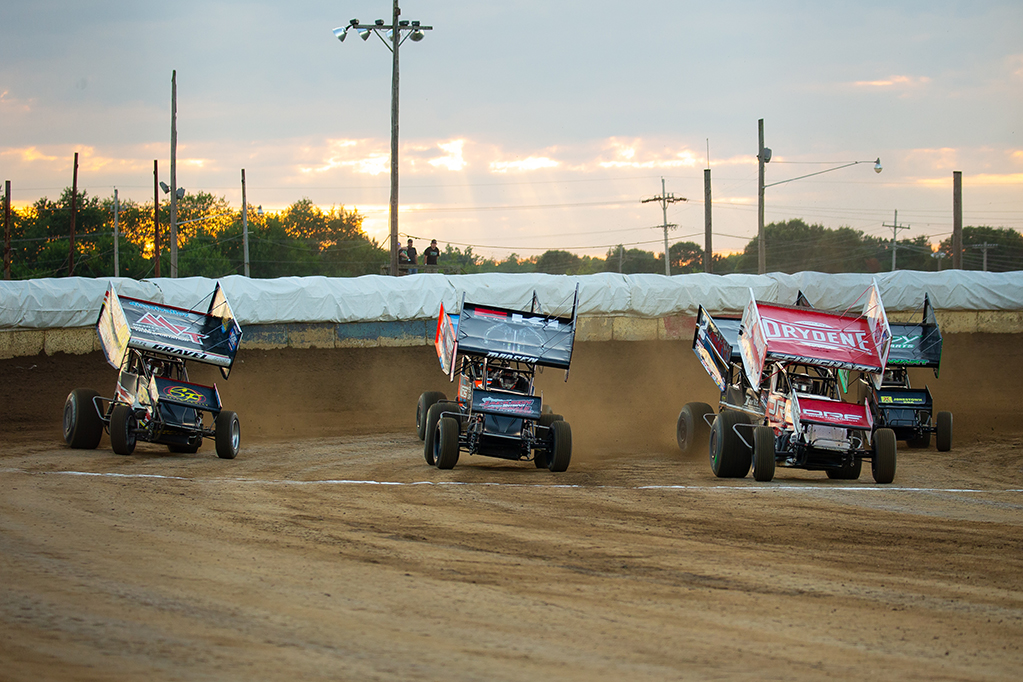 BACK HOME AGAIN IN INDIANA: Terre Haute & Lawrenceburg Conclude the Month of May 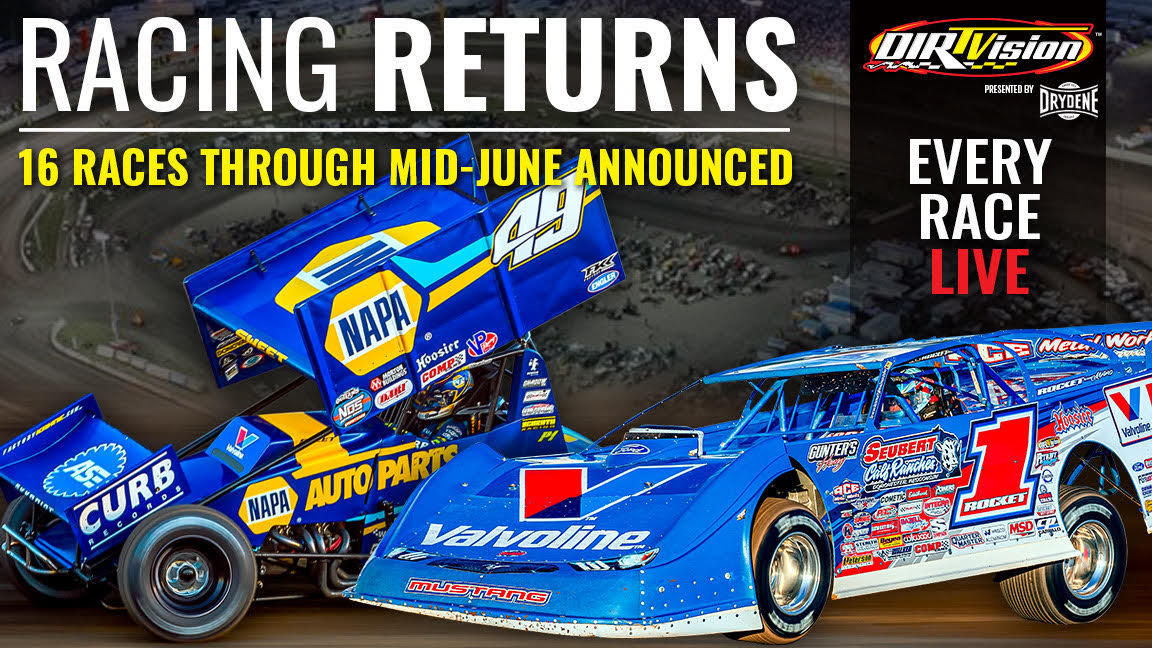 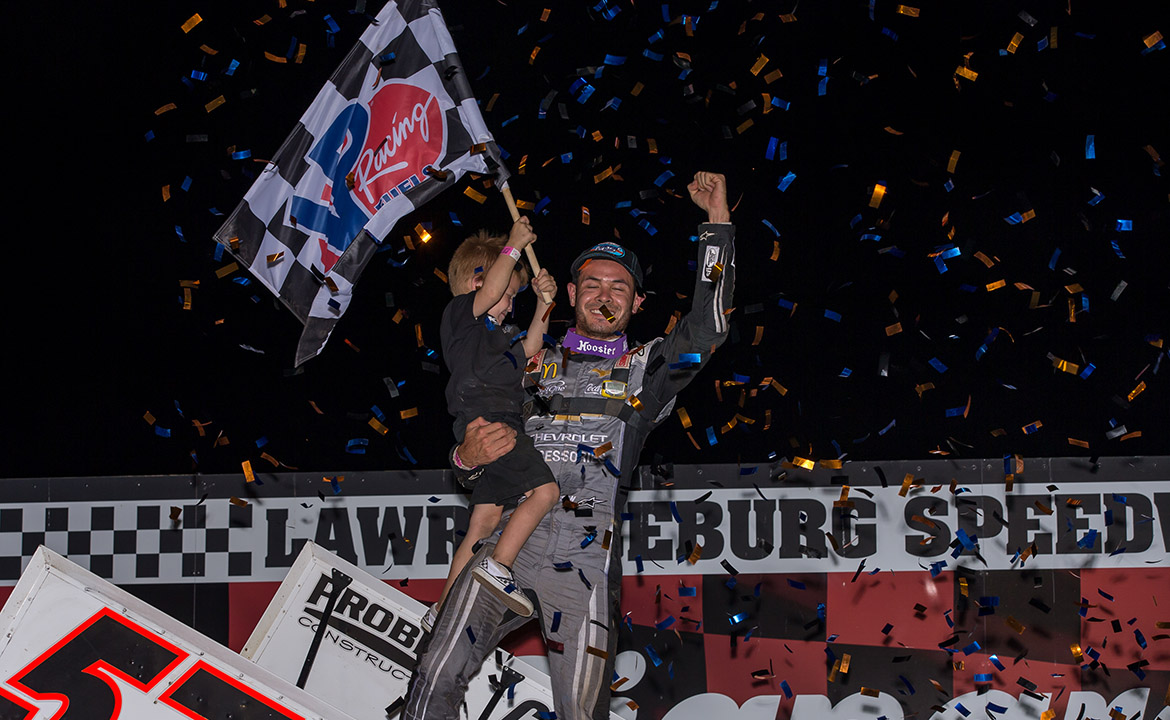 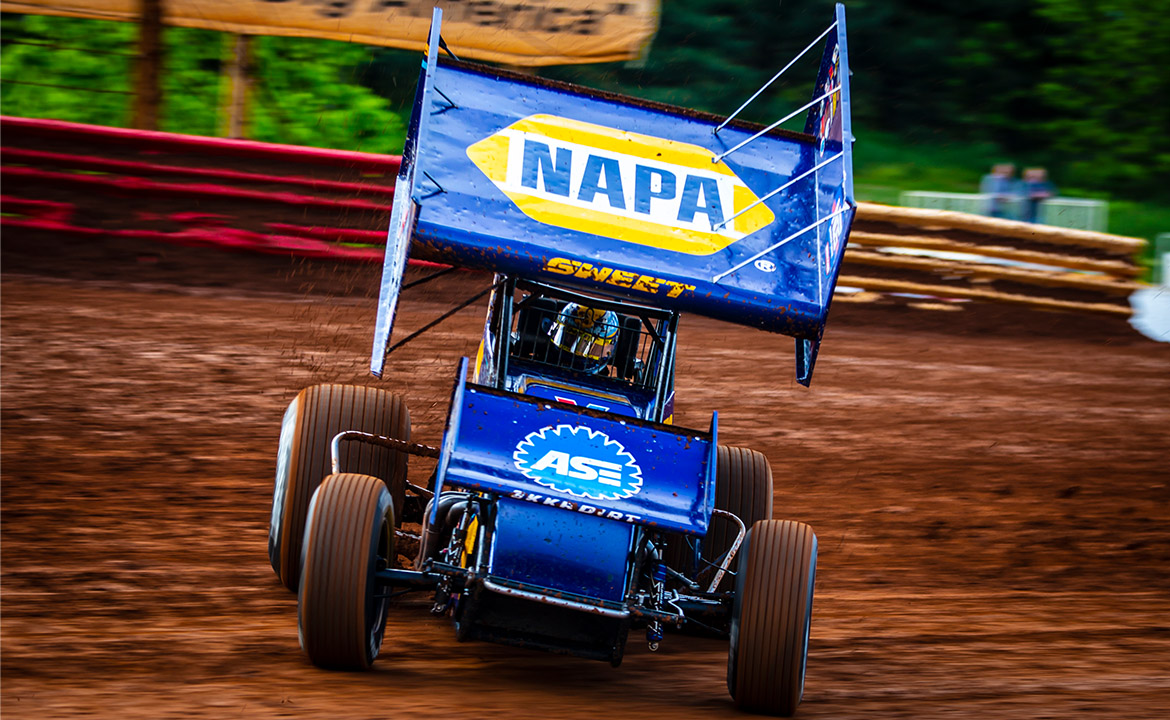