In less than a month, the two premier divisions in dirt racing will team up for the biggest Bash of the year at Bristol Motor Speedway.

Thursday will be a practice night for both Series while Friday and Saturday’s shows will be highlighted by $25,000-to-win Features for the Late Models and Sprint Cars. And before the cars hit the track, fans and drivers can celebrate the return of the event together Wednesday night at the Michael Waltrip Brewing Co. for the World of Outlaws Bristol Bash kickoff party.

Defending NASCAR Cup Series champion Kyle Larson is entered to attempt something that’s never been done before – outduel the Outlaws in a Sprint Car and Late Model on the same weekend, and potentially the same day. The Elk Grove, CA driver has entered to race the #57 Sprint Car for Silva Motorsports and the #6 Late Model for K&L Rumley Enterprises.

However, a field of the best Sprint Car and Late Model drivers in the world will stand in his way to make their own history and hoist the iconic Bristol Motor Speedway Gladiator Sword trophy.

Three-time and defending Sprint Car champion Brad Sweet – Larson’s brother-in-law – will be on the hunt to park his Kasey Kahne Racing #49 car in Victory Lane for the first time at the track. While on his quest for a fourth consecutive title, the Grass Valley, CA driver has stated he’s holding nothing back to pick up as many wins as he can this year.

“This is just such an iconic place everyone always talks about,” Gravel said after winning the Series’ return to the track in 20 years last season.

For the CASE Late Models, another all-star field of contenders are planning to bring their 800-plus horsepower machines to the half-mile speedway. Four-time Series champion Josh Richards, of Shinnston, WV, returns to defend his inaugural win, along with fellow four-time Series champion Brandon Sheppard, who is chasing Richards for a seat atop the mountain. They’re both on the hunt for their fifth title and Richards is currently only a win ahead of Sheppard for the most Series victories all-time. 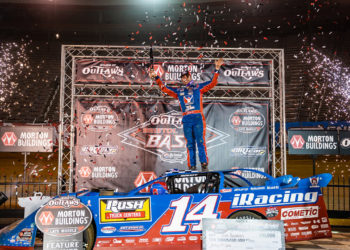 Entries can be found on MyRacePass and will be updated as they come in.

For tickets to the World of Outlaws Bristol Bash, Thursday-Saturday, April 28-30, visit BristolMotorSpeedway.com.

If you can’t make it to the event, you can watch all the action live on DIRTVision – either online or by downloading the DIRTVision App.