World of Outlaws celebrates ‘Return to Racing’ with "The Greatest Show on Dirt"  documentary as lead-in to three LIVE racing events on CBS Sports Network, capped by the first full-capacity crowd major sporting event in the United States

For the second time in its 42-year history — first since 1995 — the World of Outlaws will be broadcast nationally on CBS on Saturday, June 20, with a documentary-style COVID-era special on the world’s premier 410 Winged Sprint Car and Dirt Late Model racing series. The one-hour special, titled World of Outlaws: The Greatest Show on Dirt, will set the stage for a trio of real-world LIVE World of Outlaws feature racing on CBS Sports Network each Saturday night from June 20 to July 4.

First on deck will be the World of Outlaws NOS Energy Drink Sprint Cars at the high-banked, southern Indiana 1/4-mile oval Tri-State Speedway, where drivers pull wheelies and do battle in close quarters, short-track style. Second, from the 4/10-mile Lernerville Speedway, just North of Pittsburgh, will be the World of Outlaws Morton Buildings Late Models for this year’s rendition of the legendary Firecracker 100. Capping off the three-week run, the Sprint Cars and Late Models — which typically only cross paths for the first and final events of the season — will come together for a historic Independence Day battle on the high banks of Cedar Lake Speedway, in beautiful New Richmond, WI — the first major full-crowd sporting event in the United States.  Full details on the Cedar Lake Speedway event will be announced on Monday, June 15.

“This has been a difficult year for us, for the sport, and for all sports,” said World of Outlaws CEO Brian Carter. “We are grateful to our drivers for their flexibility and commitment, to our fans for their continued loyalty and support, to our tracks for their hard work and to CBS for providing a platform to bring dirt racing, both virtual and real-world, to fans far and wide. Everyone is aching for some sense of normalcy, and we are thrilled to bring all our efforts full circle with a ground-breaking 3-day July 4th weekend event at Cedar Lake Speedway, LIVE on CBS Sports Network for the very first time.”

During the two-month hiatus from real-life racing — with star-studded World of Outlaws iRacing Invitationals filling the sports-world void — the World of Outlaws worked with government, medical and motorsports specialists behind the scenes to pave the road back to the dirt track with its best-in-class COVID-19 Resource Center containing safety guidelines and procedures. On May 8, the World of Outlaws NOS Energy Drink Sprint Cars blazed the trail in motorsports with an unprecedented participant-only event broadcast live on DIRTVision from Knoxville Raceway. This momentous event re-opened the 2020 racing season.

“We wanted to get back to the track as soon as possible, but only with a first AND best approach, in the safest and most responsible manner, with the best thinking available at the time,” explained World of Outlaws CMO Ben Geisler, “and we will continue down this path, even as we ramp up to full-crowd events. We will rely on our experts, our process and industry-leading screening methods and COVID-related event procedures as we head into Cedar Lake and beyond.  We will also continue to look for jaw-dropping ways to introduce big events, with our focus on the at-track fan experience, while innovating around how we engage fans watching from home.”

With COVID-19 incidence rates in the area well below national benchmarks, Cedar Lake Speedway returned to racing on May 15 and has continued lower-profile events since then without any meaningful uptick in registered cases. Founded in 1957, the 3/8-mile, high-banked clay oval has developed into one of the most fan-friendly short track facilities in the country. The surrounding area offers plentiful camping and outdoor activities for the family, ensuring a fun weekend for all in Wisconsin.

“It’s been great having fans back in the stands these past few races,” said ten-time World of Outlaws Champion Donny Schatz. “Without the fans, our events are pretty surreal. It really feels like something is missing. Having our fans back in the stands, where they belong, makes the prospect of winning even better.”

Despite this year’s challenges, the World of Outlaws, which runs the most grueling schedule in all of motorsports with over 140 races originally slated for 2020, has completed 24 events this season, some without fans and some with limited crowds. Defending Champion Brad Sweet sits atop the Sprint Car point standings, but a long season lies ahead, with drivers like Schatz, Logan Schuchart and David Gravel giving chase. Meanwhile, defending Late Model Champion Brandon Sheppard leads 2019 Rookie of the Year Ricky Weiss, three-time Champion Darrell Lanigan, the legendary Scott Bloomquist and the rest of the field in the race towards the July 4th spectacular on CBS Sports Network.

Tune into CBS Saturday, June 20, at 1:30PM ET for the premiere of the World of Outlaws: The Greatest Show on Dirt. The one-hour program will introduce viewers to the high-flying Sprint Cars and door-banging Late Models, their rich histories, and their 2020 journey from the Late Model series opener at the immaculate Vado Speedway Park in New Mexico and the Sprint Car series opener at the 49th Annual DIRTcar Nationals — the unmatched 12-night February speedfest in Florida at the world’s fastest half-mile, Volusia Speedway Park — to the sudden COVID-19 halt, the ensuing iRacing cycle, and the ‘Return to Racing’.

Later that evening, the NOS Energy Drink dirt racing documentary “For the Love of Dirt” will air on CBS Sports Network at 8PM ET, leading into the first-ever LIVE World of Outlaws feature event from The Class Track, Tri-State Speedway (9PM ET).  As always, every World of Outlaws race will be broadcast live in its entirety on DIRTVision and included at no charge for FAST PASS subscribers. Feature racing at these events will be simulcast LIVE on CBS Sports Network. 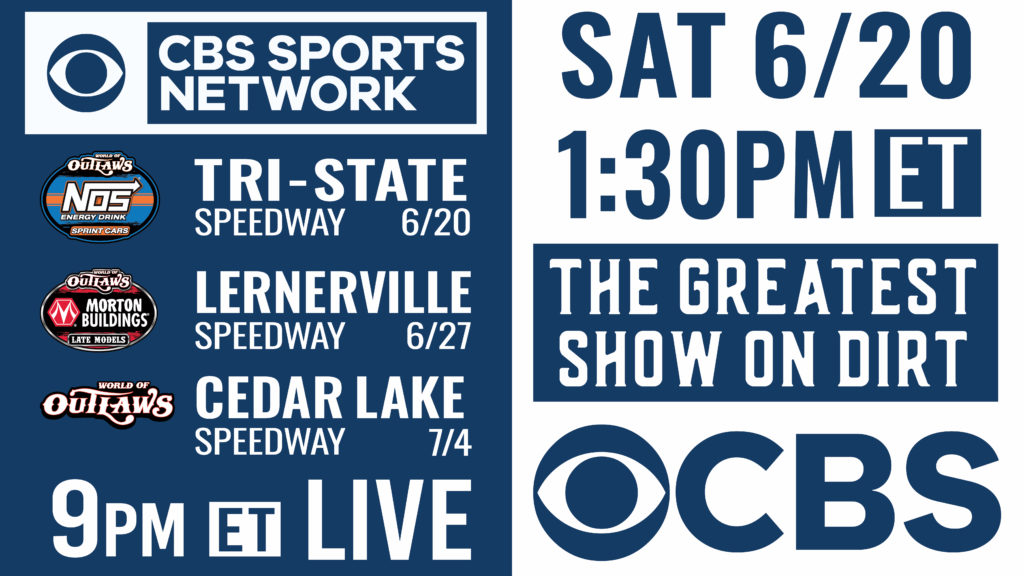 CBS Sports, a year-round leader in television sports, broadcasts a portfolio of events on the CBS Television Network, including THE NFL ON CBS; college football, including the SEC ON CBS; college basketball, including the NCAA Division I Men’s Basketball Championship; golf, including The Masters®, PGA Championship and PGA TOUR; and CBS SPORTS SPECTACULAR. In addition, the division includes CBS SPORTS NETWORK, the 24-hour home of CBS Sports, and produces INSIDE THE NFL for SHOWTIME. CBS Sports Digital’s multi-platform offerings include CBSSports.com and the CBS Sports apps for mobile and connected TV devices; streaming sports news network CBS Sports HQ; 247Sports; MaxPreps; CBS Sports fantasy games; and SportsLine.

CBS Sports Network, the 24-hour home of CBS Sports, is widely available through all major cable, satellite and telco distributors as well as via OTT streaming service providers YouTube TV, fuboTV, DirecTV and Hulu. Additionally, a live CBS Sports Network stream is available through CBSSports.com and the CBS Sports App by authenticating with select providers. For more information, including a full programming schedule, go to www.cbssportsnetwork.com.