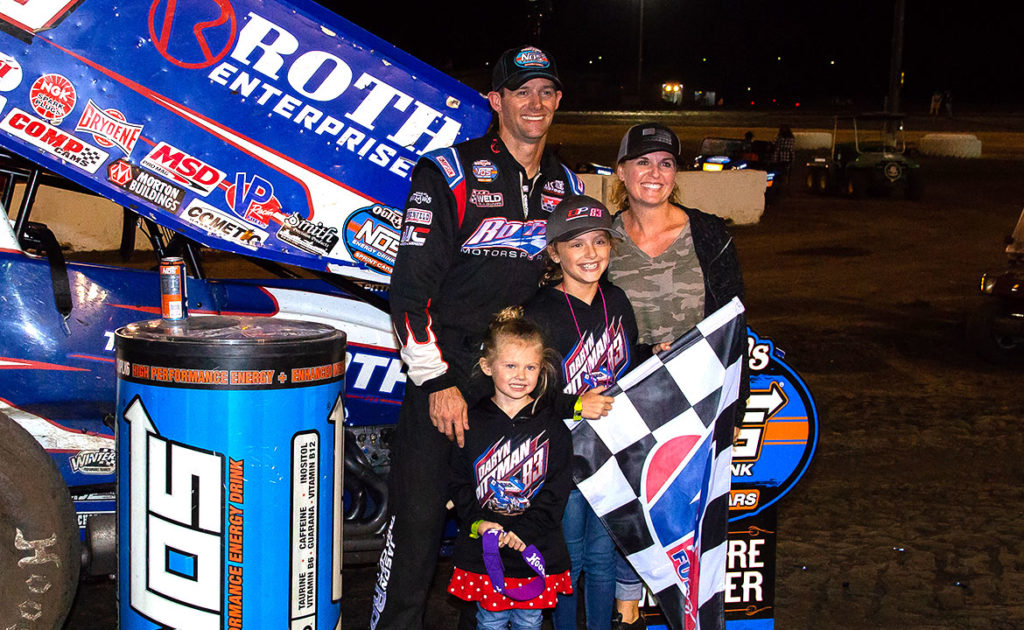 CONCORD, NC — They’ve cleaned their shops multiple times. They’ve talked with their fans on social media. They’ve played every racing video game in history. And that’s just the past week.

These are strange times, indeed, for World of Outlaws racers used to being on the road this time of the year. But sitting around the house with their feet up isn’t something any of them are able to do.

Most are focused on family and maintaining their fitness levels, trying to stay focused for when racing resumes. With several events being shifted to later in the season, the likelihood of racing when drivers would normally have an off-day will definitely increase. That could ultimately mean fewer trips to the gym and fewer trips home to be with family.

“I’ve just kind of been enjoying some time with my wife and daughter,” said defending World of Outlaws NOS Energy Drink Sprint Car Series champion and current points leader Brad Sweet from his California home. “A lot of at home activities. Cleaning up the yard. Working around the house. Just trying to kill time. Still working out, trying to stay in shape. Watch race videos on DIRTVision. Obviously, hoping we can get back going sooner rather than later. I want to be ready whenever that time is.”

While 2013 champion Daryn Pittman is trying to follow orders to stay at home in Indiana, he’s discovering the challenges.

“We’re trying to stay isolated and do what we’re supposed to do, but it’s difficult,” said Pittman, who drives the Roth Motorsports #83. “Fortunately, I have a shop here and I can work on my midget. My motorhome is kind of always a full-time job as well, trying to keep it fixed up and cleaned up. Just trying to stay busy around the house. Trying to do a little spring cleaning around the house, get rid of stuff. But between the two kids being home every day, obviously, Taylor is home schooled, so that didn’t really change a whole lot, but Kady being home, she did go to a couple days of school, so her being home is a little bit of a distraction, as well. We try to do school with both of them, make things as fun for them with them being stuck in the house. Every day is a new adventure on what we do.

“We just try to play a lot of board games. The kids always loved that. Now we have more time to do it. Just doing a lot of that and redoing some of their rooms. Trying to spend time together and make this as much fun as possible. I don’t get to go to the gym anymore, so my gym sends out our workouts every day, so the kids get a kick out of that. We’ve actually been doing that as a family in the house. They like gym time in the morning and they’ve been doing that with me every day. They actually really enjoy it.”

Last season’s NOS Energy Drink Knoxville Nationals winner David Gravel is gearing up for Wednesday night’s World of Outlaws iRacing Invitational, which airs at 9 pm (ET) on DIRTVision. In fact, his simulator already got a workout this week when neighbor Kurt Busch used it to race in NASCAR’s version.

Gravel, who is mixing in some NASCAR racing this season in addition to piloting the Jason Johnson Racing #41 car, got to show the former Cup champion how to transition to the digital version of racing.

“He probably learned more from me than I learned from him just because the iRacing thing is so new to him,” Gravel said. “He never used it before, but it was definitely cool to have him over. He taught me some things about asphalt racing. It was definitely a cool experience.”

Kevin Gobrecht Rookie of the Year contender Mason Daniel is only three races into his full-time World of Outlaws career and trying to keep his focus ready.

“I work out every day on the ranch (in California),” he said. “Anything with hand-eye coordination. Rope or tennis or anything like that. I’m just kind of staying in shape and keeping my cardio up.”

The World of Outlaws Morton Buildings Late Model Series racers are facing the same battles, facing the potential of a summer full of blockbuster events stacked back-to-back with little time to rebuild.

Louisiana’s Cade Dillard is back home after a hot start in his #97 machine that included a victory during the season-opening weekend at Vado Speedway Park in New Mexico.

“I like working in my yard and mowing so I’ve been spending a lot of time doing that,” Dillard said. “Me and my daughter take pretty regular four-wheeler rides through the pasture.”

Dillard knows once the green flag waves on the season again, it’s going to be game on.

“I’m sure once all this clears racing will be wide open and I won’t be able to be home with my family much so I’m just enjoying time with them now,” Dillard said. “On top of this virus stuff, though, our economy is definitely going to hurt. The oil field has gotten very bad and my program is primarily sponsored my oil field companies. So, on top of the coronavirus, I pray for all the businesses being affected, as well.”

All the racers are looking ahead to when racing resumes, but none more than points leader Sweet and his #49 Kasey Kahne Racing car.

“I’m just looking at these as rain outs,” Sweet said. “I’m trying to stay in shape, watch (racing) videos, keep thinking about how we were at Volusia. I don’t want that to go away. I feel like we have everything in the right place for a good season. Hoping that when we do get racing that we pick up where we left off. Hopefully we can still get in a lot of racing and go for another championship. Hopefully once we get through half of the season this year it’ll seem like it wasn’t that big of a deal.”

Pittman’s outlook is to take it race-by-race.

“We know we still have to concentrate one race at a time and improve on a nightly basis and learn from mistakes and just try to take one race day by day,” said Pittman. “We’ll try to go out to each individual race and win.”

Gravel has the added challenge of competing on the World of Outlaws tour with several NASCAR races in the mix.

“For me, juggling two schedules is going to be a bit of an obstacle this year with all of the change now,” Gravel said. “I just have to sit back and let everything unfold and go from there and come up with a game plan. For us drivers, I think working out and being in iRacing to keep your eye-and-hand coordination sharp is what we need to do.”

Like most fans, the drivers eager to get back to normal. After all, there’s only so many times you can clean the shop.