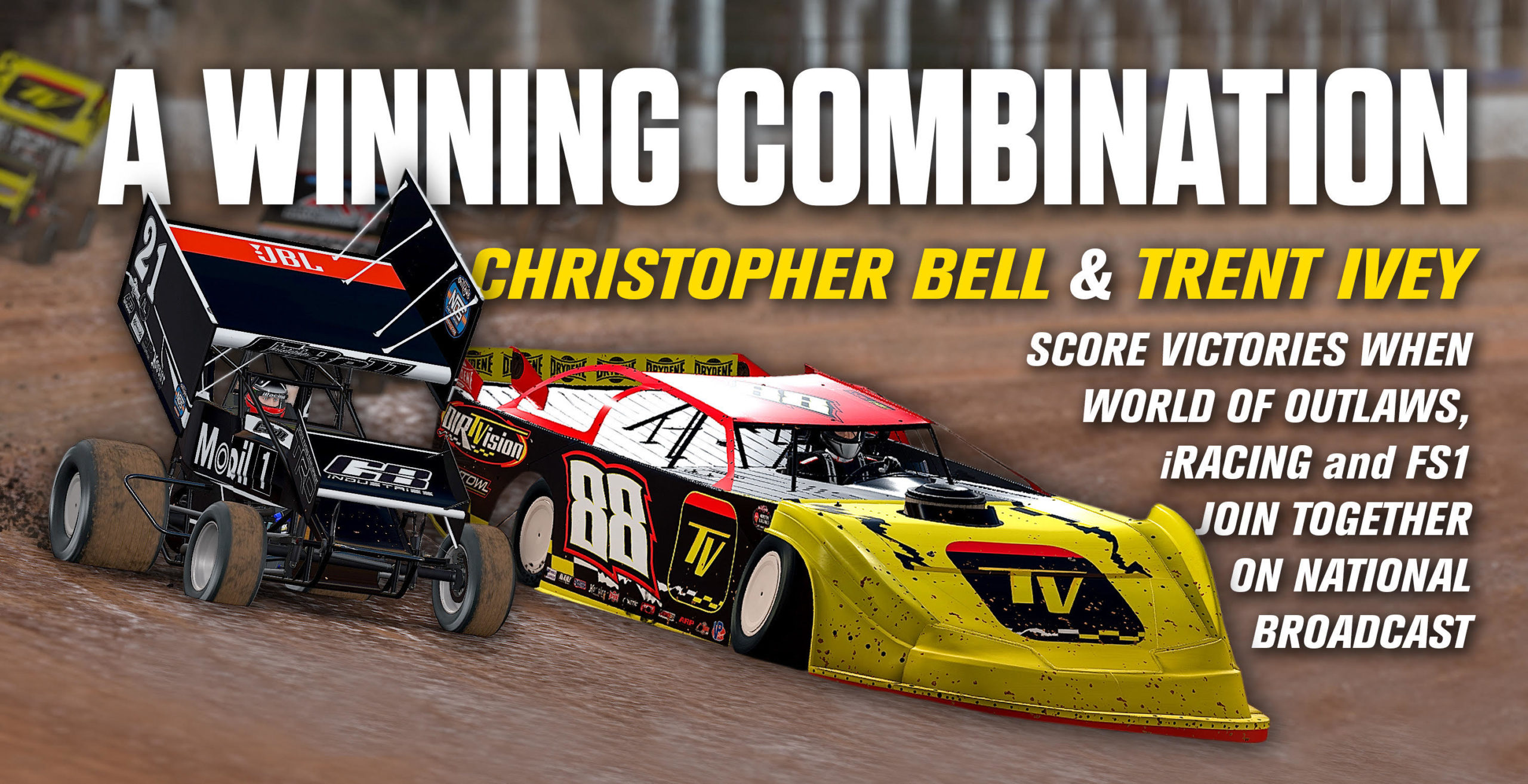 Forty drivers strapped into their chariots. Hundreds of thousands of fans sat at the edge of their seats with the thunderous roar of eight-cylinder engines emphatically echoing around them.

However, those chariots were Sim Rigs. Those seats were couches, armchairs, beds and possibly even the floor. And those engines were the simulated sounds of World of Outlaws NOS Energy Drink Sprint Car Series Sprint Cars and Morton Buildings Late Models on iRacing, broadcasted through televisions for the first time in history on FOX Sports 1.

The historic night of World of Outlaws racing started with the World of Outlaws Sprint Cars taking to The (virtual) Dirt Track at Charlotte first with NASCAR-star and dirt racing aficionado Christopher Bell picking up the win. Afterward, Trent Ivey powered to victory in the World of Outlaws Morton Buildings Late Model Series main event, with Jeff Gordon and Clint Bowyer providing commentary, the World of Outlaws Johnny Gibson calling the action and Adam Alexander serving as the ringleader on FS1.

The hand-picked Sprint Car field of 20 elite of drivers was lined up by an algorithm of average iRacing lap times with a six-car invert. That put fan-favorites Rico Abreu and Kyle Larson on the front row.

When the 35-lap Feature went green, Robbie Kendall worked his way around Abreu for the early lead, but before the first lap was completed, Kevin Swindell made an incredible charge from seventh to first.

Swindell, running the bottom, held the lead for the first half of the race with Larson lurking behind him and Bell creeping his way from fifth toward the front.

Bell, running up near the wall, made his way by Larson for second at the halfway point and set his target for Swindell. In the last World of Outlaws Sprint Car Invitational, Bell and Swindell made contact racing for the lead, putting Bell in the wall and taking him out of the race. Not this time.

After the restart with 15 laps to go, Bell powered his way by Swindell for the lead and set sail. Swindell said on Twitter after the race that he was unable to run the top like he needed, allowing Bell to pull away to a more than two second lead.

With his right rear tire inches away from the wall, Bell drove off Turn 4 for the final time to claim the virtual checkered flag, the $1,000 prize and the historic World of Outlaws NOS Energy Drink Sprint Car iRacing Invitational win.

“It’s been really cool to see the evolution of iRacing,” said Bell, of Norman, OK. “I’ve been on this for so long now. It was a game. It was a lot of fun for me and my friends to get on here and race, but now, I guess it is kind of our job right now with the NASCAR stuff on Sundays and the Outlaws coming on board (on FS1) to run Sprint Cars. It’s really cool to see iRacing capitalizing on this moment of everyone being at home. It gives us something to do and it’s really fun to race against competitive drivers.”

Racing on iRacing is no easy task, either. Larson said his heart rate was up the whole time due to stress and adrenaline. And Logan Schuchart, who, like in real life, made a spectacular charge through the field from ninth to finish third, said on Twitter he felt like he was in his actual car.

“My nerves were up,” said Schuchart, of Hanover, PA. “I feel like I was in a real race. We were racing with some guys, slide jobs there at the end. It was a lot of fun.”

It was no different for Ivey, who was one of several racers pulling doing double-duty and racing in both events on Wednesday night. Coming to the green from the outside pole in and Invitational on Monday night, his computer crashed, as if the motor blew in his actual Dirt Late Model. On Tuesday afternoon, he was on his way back home with a brand-new unit. By Wednesday night, Ivey was waltzing across the finish line at The (virtual) Dirt Track at Charlotte for his first World of Outlaws Morton Buildings Late Model iRacing Invitational victory.

“I really get a kick outta playing this game. Man, I’m shook up, I can’t believe it,” Ivey said to NASCAR Hall-of-Famer Gordon in the post-race interview at the end of the 50-lap Feature.

Coming from his eighth-place starting spot, Ivey, of Union, SC, put the hammer down right away and passed four cars in the opening lap to set himself up for a look at the leaders. Switching back to the high groove for Lap 2, Ivey stalked his competition into Turns 3 and 4, taking advantage of some contact between frontrunners Nick Stroupe, Kaeden Cornell and Matty Watkins to squeak by on the low side and advance to the runner-up spot.

A quick yellow reset the field with Ivey to the outside of leader Stroupe, who dove to the bottom on the restart to take the spot away, but only briefly. A big slide job thrown by Ivey in Turns 3 and 4 on Lap 10 earned him the lead that he never relinquished. The race, however, was far from over.

Ivey was forced to fend off several fierce challenges from his competition through multiple cautions during the 50-lap contest. Using his plentiful iRacing experience, Ivey stuck his DIRTVision #88 right on the top groove and paraded the field around while the battles raged on behind him.

A restart with 15 laps remaining saw Super Late Model driver Kaeden Cornell, of Willard, MO, line up behind the leader and in front of Kyle Larson. The two took the green and proceeded to trade slide jobs for several corners in-a-row for the runner-up spot; Cornell got the best of the exchange and pulled away from Larson with 10 laps left.

Meanwhile, Monday’s Invitational winner, DIRTcar UMP Modified ace Mike McKinney of Plainfield, IL, held his ground inside the top-10 the entire race and eventually caught Larson’s rear bumper. He soon engaged in a slide job-battle of his own with Larson for the next two laps, taking the spot away on the high side with eight circuits remaining.

Back out front, it was all Ivey. With several car-lengths between he and second-place Cornell, The Lil’ Headknocker cruised underneath the virtual checkered flag to collect the win and a cool $1,000 for his efforts.

“I was actually racing Monday night, and my computer blew up coming to green,” Ivey said. “I was on the outside pole with [Mike] McKinney, so I feel like this one owed me. I had a great time with the Sprint Cars, to finish fourth, that’s a good time. I’m super excited, I can’t believe it.”

Larson, a NASCAR star and Chili Bowl winner who got his start on dirt, finished seventh in the Sprint Car event and fourth in the Late Model race. He was racing from a simulator in the FOX studio, offering a unique perspective on the action.

“I’m thinking maybe next time, as my heart rate finally begins to calm down, maybe I should bring my heart rate monitor in and show these guys how stressful this game can be,” Larson said.

In the end, the racing and the production showcased all that is good about World of Outlaws racing, even if for this night it was simulated.

World of Outlaws on iRacing Results; April 1, 2020; The (Virtual) Dirt Track at Charlotte