Fireworks will light the sky while three drivers lift their championship trophies with pride at the conclusion of the World of Outlaws World Finals at The Dirt Track at Charlotte. But, prior is a week full of activities.

The World of Outlaws World Finals has expanded to four days of on track action this year, Nov. 2-5, adding to the fan experience and giving drivers another chance to gain points toward their championship dreams – and earn more money with a more than $600,000 overall purse.

And while the Super DIRTcar Series may not have on track action, its drivers will line the front stretch for a two-hour Fan Fest (2 to 4pm ET) before racing action, allowing fans to get up close to their favorite drivers and cars. World of Outlaws fans will have the same opportunity the next two days with a Fan Fest (from 2 to 4pm ET each night) for the Sprint Car drivers on Thursday and one for the Late Model drivers on Friday.

Then, three champions will be crowned on Saturday, Nov. 5, with a massive night of action. Points accumulated from the previous nights will determine the Heat Race lineups for each Series. After competing for $15,000-to-win races during the weekday races, both World of Outlaws series will battle for $25,000-to-win in Saturday’s Feature. The Super DIRTcar Series will compete for $10,000 paydays during the week and $15,000 in the finale.

Before the Features, the famed 4X3 Wide Salute, placing the fields for the World of Outlaws and Super DIRTcar Series on track at the same time, will grace the speedway for the most iconic photo opportunity in motorsports.

While Sweet has the fourth most wins this season of all drivers, he and his Kasey Kahne Racing, NAPA Auto Parts #49 team have been the masters of consistency this year. Sweet has boasted a fifth-place average finish and his worst finish, so far, is 16th at the season opening race.

However, if Sweet slips and allows Gravel to catch him before World Finals, the championship picture could look vastly different. Sweet has yet to win at The Dirt Track at Charlotte while the 4/10-mile track is one of Gravel’s best.

Gravel also has to worry about holding off third-place Carson Macedo. The California native is 40 points behind Gravel and has the most wins, so far, this season with 11.

Erb is having a career year, holding a season high for wins, top fives and top 10s. His consistency has helped propel him to the top of the leader board, ahead of Rookie of the Year contenders Tanner English and Max Blair – who will be battling for the title until the final lap of the season.

Three more races are left for the Late Models to set the stage for their all-out championship brawl at Charlotte.

The 50th Running of NAPA Auto Parts Super DIRT Week (Oct. 3-9) is the last race for the Super DIRTcar Series before World Finals and unlike other Series events it’s a double points event. In 2019, Sheppard had an issue that took him out of the race while Williamson won. That allowed Williamson to close drastically in points and then beat Sheppard at World Finals for the Series title.

So, while Sheppard has a comfortable point lead now, the Series championship is far from settled.

If you can’t make it to the track, you can watch every lap of the World of Outlaws World Finals live on DIRTVision – either at DIRTVision.com or by downloading the DIRTVision App. 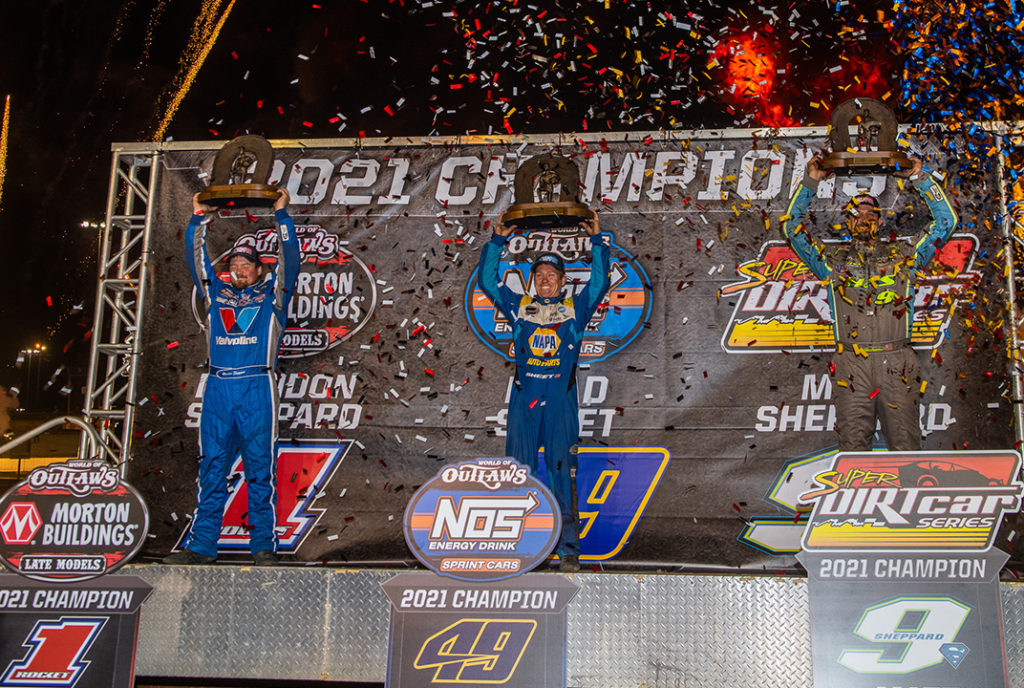