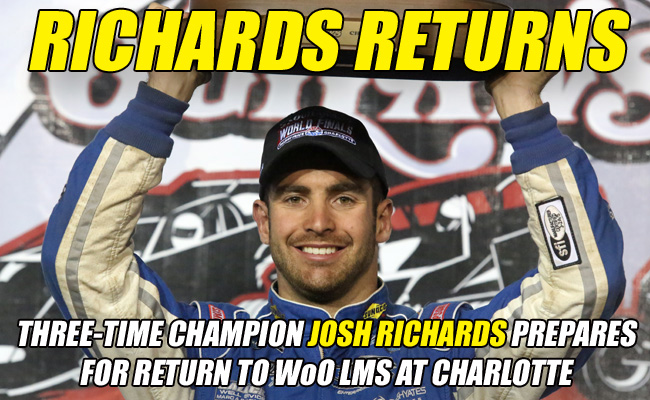 The three-time World of Outlaws Late Model Series champion returns to WoO LMS action for the first time in nearly a year this weekend (Nov. 6-8) as the national tour wraps up the 2014 season at the eighth annual Bad Boy Buggies World of Outlaws World Finals at The Dirt Track at Charlotte.

After sitting out the majority of the season due to nerve issues in his hands, Richards, 26, of Shinnston, W.Va., was cleared by doctors to return to the seat of the Rocket Chassis house car in time for a pair of non-series events in October. He’ll return to the WoO LMS for the first time since the end of last season when the World Finals kicks off with two sets of time trials on Thursday ahead of separate $12,000-to-win WoO LMS programs on Friday and Saturday.

Richards couldn’t have picked a more fitting track to make his WoO LMS return. After all, the 4/10-mile high-speed oval is where he wrapped up the 2013 WoO LMS title with a dominating victory during his most recent series race.

“I’m more than excited,” Richards, the 2009, 2010 and 2013 WoO LMS champion, said of his anticipation for Charlotte’s blockbuster event that also features action for the World of Outlaws STP Sprint Cars and the Super DIRTcar Series Big-Block Modifieds. “Charlotte is one of my favorite places to race. I haven’t been this excited about a race in a long time. I really couldn’t be more excited to get down there.”

After his impressive run to the WoO LMS championship in 2013, few could’ve expected January’s shocking news that Richards would have to sit out the start of the 2014 season with no anticipated date to return. After rising to the pinnacle of the sport at such a young age, Richards appeared poised for a long and prosperous career before the uncertainty of his medical issues put his racing future in doubt.

Richards knew the Rocket house car was in good hands with former WoO LMS champion Rick Eckert of York, Pa., filling in during his absence. But coping with the idea of potentially never racing again took its toll on Richards as he dealt with a gamut of emotions before he was unexpectedly cleared to return to racing last month.

“There was a time when I thought I may never get back in a car again,” Richards said. “When you think you can’t do something ever again, it changes a lot. It was an emotional rollercoaster for sure.

“It wasn’t like I was even anticipating getting back. I felt like I was coming back, but I literally had no idea for sure. I was really expecting to hear the other way around when I got the results from the doctor’s office. But they cleared me to race and that was great.”

The extended break from racing wasn’t all bad for Richards. In fact, there were plenty of positives to keep him from worrying excessively over the fate of his racing career. Most notably, his marriage to fiancée Andrea Cleveland in August.

“There’s been a lot of changes this year and (getting married) was definitely the biggest. It’s the best thing that’s ever happened to me,” Richards said. “Not racing was really tough in a lot of ways, but in other ways it was actually good. It gave me time to focus more on other aspects of my life. I feel like I’ve grew a lot as a person being away.”

Richards also kept himself busy working in the Rocket Chassis shop and assisting Rocket customers, including WoO Sprint Car Series champion Donny Schatz, who pilots a Rocket Chassis when making select Late Model starts during his time off from Sprint Car action, and Shannon Babb, who drove a Rocket Chassis to the DIRTcar Summer Nationals championship this summer.

“I love the sport so much and it’s all I’ve ever done and all I’ve ever known,” said Richards, who also found time during his stint away from driving to star in the country music video Miles to Go by The Marshall Lowry Band. “I enjoy helping people and all of that, so I looked at a lot of different ways of how I could still be involved in the sport I love and still make a living at it.

“I got to go out and work with Donny Schatz with some of his Late Model stuff and went to a few Summer Nationals races with Shannon Babb. I think that was a good experience for me getting to work with those guys.

“It was definitely tough not driving the car, but I think in a way it was good to get away. But without a doubt, I definitely missed being behind the wheel. I can’t get enough of it now that I’m back.”

Richards’ results in his first two races back haven’t quite matched the performance level he left off with when he claimed the 2013 WoO LMS title. A scrape with the wall in a heat race at Eldora Speedway’s UMP Fall Nationals caused him to miss the A-Main lineup in his first race back on Oct. 4, and he finished 12th at Portsmouth Raceway Park’s Dirt Track World Championship on Oct. 19. But Richards hasn’t been deterred; he’s enjoying his return to racing no matter what the results.

“There’s some times when you do it for so long it gets stale and you’re looking for something and you just can’t find it,” Richards said. “Being away, it definitely makes you appreciate it more and makes you anxious to get back at and just go out there and have fun.”

Even if his first two races back haven’t produced his usual results, there’s still plenty of reason to expect Richards to be among the contenders at the World Finals. His past Charlotte success speaks for itself. With five-career WoO LMS victories at Charlotte, Richards is tied with Jimmy Owens of Newport, Tenn., for the most series wins at The Dirt Track; and he’s won a race there every year since 2008 except for when he stepped away from full-time Late Model racing to pursue NASCAR opportunities in 2012.

Charlotte has also given Richards quite a few heartbreaks throughout his career, the most painful of which came during the 2011season finale when Richards suffered a flat tire that cost him the WoO LMS championship. That setback, on top of a number of other near-misses, gives Richards a bit of extra motivation every time he returns to Charlotte.

“My goal is always to win,” said Richards, who’s second on the WoO LMS all-time wins list with 49 career A-Main victories on the tour. “Charlotte is by far one of my favorite racetracks and I’m definitely confident going there. We’ve had a lot of success there. But we’ve had a lot of heartbreak there, too. We’ve had a lot of emotions at that track in general, both high and low, but it seems like we’re almost always competitive there.”

If Richards is going to return to his winning form at Charlotte, he’ll have to overcome one of the year’s toughest fields. A strong list of WoO LMS regulars is led by Richards’ rival Darrell Lanigan of Union, Ky. Lanigan has been nearly unstoppable on the WoO LMS this season, earning a record-setting 16 A-Main victories.

Lanigan needs only to enter both World Finals events to clinch his third WoO LMS championship, but he’s made it clear that he aims to add more wins to his season’s total.

The World Finals will also draw a fierce contingent of non-series regulars including red-hot Scott Bloomquist of Mooresburg, Tenn. Along with Lanigan, Bloomquist has been one of the sport’s winningest drivers this season with victories in the World 100 and the Dirt Track World Championship.

Bloomquist, the 2004 WoO LMS champion, hasn’t won in nine WoO LMS A-Main starts this season. He’ll need to claim at least one of the World Finals A-Mains to avoid his first season without a WoO LMS victory since 2006.

Richards is well aware of the competition he’ll face this weekend, including the Lanigan and Bloomquist juggernauts. But that doesn’t faze Richards, who enters the weekend as confident as ever while still remembering to simply enjoy being back behind the wheel.

“It’s all about finding something you’re comfortable with and guys like Darrell and Scott have found that comfort zone and are making the most of it right now,” Richards said. “My entire career I’ve never worried about who I line up beside. I look at it like I’m here to beat everybody, doesn’t matter who it is or how good they’re running. If you ever question whether or not you can beat someone, then you’re probably not going to.

“I know we’ll be OK. It’s going to take some time to get back in the groove of things and get back in our comfort zone. But we’ll get there. Right now we’re just going out and doing the best we can and having fun.”

The World Finals begin on Thurs., Nov. 6 with Qualifying Night featuring two rounds of WoO Late Model and Sprint Car time trials and two sets of Super DIRTcar Series Big-Block Modified heat races. Each division’s first round of qualifying will apply to Friday’s program and the second round to Saturday’s event.

Tickets for the World Finals Presented can be obtained by logging on to www.charlottemotorspeedway.com or calling 1-800-455-FANS. Three-day packages are available for the bargain price of $89 and $34 for children 13-and-under.