World of Outlaws Spend Majority of July in the Midwest 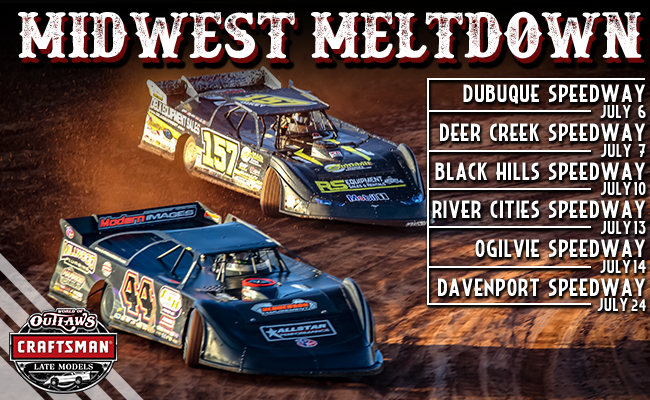 CONCORD, NC– July 2, 2018– The World of Outlaws Craftsman Late Model Series treks out to the Midwest for six separate $10,000-to-win events in July. This is the first time in 2018 that the Outlaws will be west of the Mississippi River.

The swing through the Midwest begins on July 6 at Dubuque Speedway in Dubuque, IA. The series invades the 3/8-mile Iowa dirt track for the first time since 2005. Special to this event, fans who purchase tickets in advance will receive a free fan pit pass.

With special access to the pit area in Dubuque Speedway, fans will be able to meet their favorite drivers, watch crew members turn wrenches on the 800 horsepower machines, attend and listen to the drivers meeting, see lineups and results at the World of Outlaws command center and more.

A tight championship battle among South Carolina’s Chris Madden. Tennessee’s Mike Marlar and Illinois’ Brandon Sheppard is setting the stage for a showdown unlike any Eastern Iowa has seen before on the 3/8-mile high-banked dirt oval in this Mississippi River town.

Madden is coming off a huge Firecracker 100 victory in his attempt to unseat Sheppard as series champion, but on Saturday night Sheppard took the checkers in Missouri to close the gap. On the verge of a big Midwestern momentum swing, veterans Shane Clanton from Georgia and Pennsylvanian Rick Eckert are also looking to crash the podium, with 2017 top rookie Devin Moran from Ohio right on their heels after Moran grabbed the win on Friday night at Indiana.

The following day the Series will make the three-hour drive to Deer Creek Speedway for the $10,000-to-win 39th Annual Gopher 50. The World of Outlaws will make its 14th consecutive appearance at the Spring Valley, MN dirt track.

“The first Gopher 50 I went to, I think I was like 10 or 11,” said Olson. “I grew up going to them and watching the World of Outlaws. I have maybe 50 different things signed by Rick Eckert. For the past six years, I’ve worked with the Series and alongside the drivers that I used to look up to as a kid. The Gopher 50 is one of my favorite events of the season, and I’m excited to head back there.”

Two days later, the World of Outlaws Craftsman Late Model Series heads out to the westernmost point of the 2018 season on Tuesday, July 10, under the watchful eyes of Mt. Rushmore at Black Hills Speedway in Rapid City, SD.

The South Dakota half-mile dirt track was one of 13 tracks listed on the Series inaugural season schedule in 1988. Willy Kraft won the shootout on June 5, 1988.

Since then, only one additional World of Outlaws event has been completed at Black Hills Speedway in Rapid City, SD in 2012 when Rick Eckert, veteran driver out of York, PA, collected his second win of the season.

“Both times I’ve been here I’ve won, so I love this place,” said Eckert in Victory Lane in 2012. “I’ll tell you what, it’s so far from home, but I have to come back. It sure was worth the trip.”

Eckert’s first win at Black Hills Speedway was a UDTRA series event in 2003 on the old four-tenths-mile Black Hills layout that was bulldozed and replaced by the current half-mile oval in 2007.

Eckert is still searching for his first win of the 2018 season and is looking forward to returning to Black Hills Speedway in hopes of repeating his past success at the South Dakota dirt track.

The World of Outlaws Craftsman Late Model Series returns to River Cities Speedway for the 13th consecutive season on July 13, 2018.

Both Clanton and Erb are still looking for their first win of the 2018 season. Clanton has collected two second-place finishes so far this season: Whynot Motorsports Park in Meridian, MS on April 21 and Cherokee Speedway in Gaffney, SC on May 4.

Whereas Erb collected his first top-five of the season in the Series’ most recent and richest event so far this season during the $30,000-to-win Firecracker 100 at Lernerville Speedway. Erb battled Devin Moran for second for nearly all 100 laps of the event, but Mike Marlar snuck by the young guns to steal the spot with less than 10 laps remaining. Erb settled for third but was still thrilled for a strong finish.

“It was a really really good run,” said Erb on his third-place run at Lernerville. “It was our first top-five of the year, I think. Just everything that could have, broke; and a lot of driver mistakes. I’m super happy… The car has been really good for the past two or three weeks, I just haven’t had much to show for it.”

Ogilvie Speedway is a track that Chris Madden has had circled on his calendar since the World of Outlaws 2018 schedule was released.

Claiming back-to-back wins in 2017 at Deer Creek Speedway and Ogilvie Speedway, Madden was able to catapult in the Series point standings up to a tie for second with Erb. Madden swept the shootout at the Minnesota dirt track in 2017 by setting fast time, collecting his heat win and charging from fourth to claim the checkers and $10,000 payday.

This season, Madden will be looking to accomplish the same feat.

As the current Series point leader, Madden and his Barry Wright Race Cars team are looking to add some cushion between him and Mike Marlar in second. The pair is only separated by a slim four points, which is only a difference of two positions on any given race night.

The shootout at Ogilvie Speedway on July 14 might just be that extra push Madden is looking for toward the $100,000 World of Outlaws Craftsman Late Model Series Championship.

The World of Outlaws swing through the Midwest in July will come to an end at Davenport Speedway on Tuesday, July 24. The Series returns to the half-mile speed-plant for the first time in more than a decade.