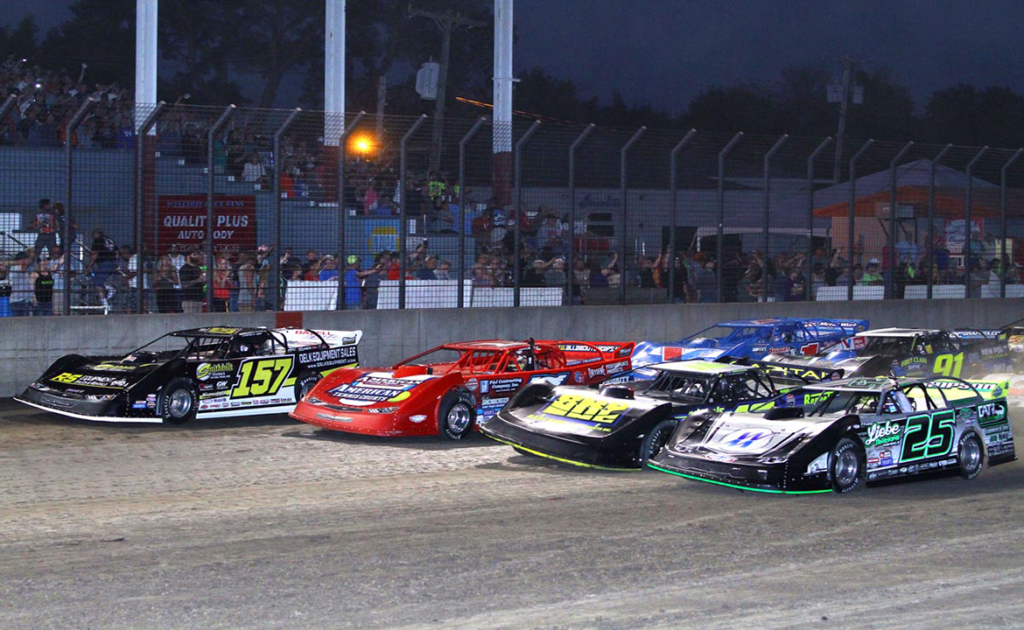 The World of Outlaws Morton Buildings Late Model Series makes its return to Davenport Speedway in Davenport, Iowa, for the second consecutive year next Wednesday, July 24. This will be the fourth visit in Series history to the Mississippi Valley Fairgrounds half-mile and the second race in the state of Iowa this season.

Last year, home-state hero Chad Simpson outran the field and a late-race charge from Chris Madden to capture his very first World of Outlaws victory. His brother, Chris Simpson, of Oxford, Iowa, drove to a third-place finish that night and was very proud to see the Simpson family name grace two of the three spots on a World of Outlaws podium.

Both brothers are expected to be in attendance next Wednesday for another 40-lap, $10,000-to-win showdown, pitting “The Most Powerful Late Models on the Planet” against some of the best Dirt Late Model drivers in the Midwest. The crowd was at its capacity last year, and if the race they saw that night was any indication, this year should be no different.

Through the first 23 races on the 2019 schedule, 2017 Series Champion Brandon Sheppard tops all drivers in the win column with an impressive 13 victories, or a win percentage of 56.5. The New Berlin, Illinois-native is currently in his third full-time season with the World of Outlaws behind the wheel of the Rocket1 Racing ride and has stacked an unheard of 22 top-fives in 23 starts. With his victory at River Cities Speedway on July 12, “The Rocket Shepp” now joins four-time Series Champion Josh Richards and three-time Series Champion Darrell Lanigan as the third driver in history to win at least 50 World of Outlaws Feature events.

Over the first leg of the North/Midwest swing, 2015 Series Champion Shane Clanton has really stepped into a zone, scoring a win, four top-fives and seven top-10s over the last seven races, leaving him fourth in Series points. His win at Ogilvie Raceway last Saturday night was his second of the year, first since February 9 and third in the state of Minnesota. He is now tied with three-time Series Champion and Dirt Late Model Hall-of-Famer Billy Moyer for fourth on the all-time World of Outlaws Feature wins list.

Clanton, a former pilot of the Ron Davies-owned, Weldbank Energy Racing Capital Race Car, recently joined forces with fellow Capital chassis team-owner Greg Bruening to fill the vacant Skyline Motorsports ride. Since his debut behind the wheel of the Bruening Rock Products, Bennett Explosives, Super K Express, Clements Racing Engines #25, the team has been a threat to win at every race. Most recently, his runner-up effort last Sunday at Red Cedar Speedway put the new team’s immediate cohesiveness on display for those in attendance and those watching live on DIRTVision.

As of July 14, Sheppard is leading the points standings by a whopping 206 points over next closest Lanigan, who has racked up 13 top-fives and 19 top-10s in 23 races. Headingley, Manitoba-native and Rookie of the Year frontrunner Ricky Weiss has been pounding on the door for his first Series victory and currently sits third in points. Zebulon, Georgia-resident Clanton is fourth, 232 markers back from Sheppard and most recent Morton Buildings Feature winner, Chase Junghans, rounds out the top five.

Joining the Outlaws at the track on Wednesday evening will be the IMCA Modifieds; hot laps are scheduled for a 6:30 p.m. start.

Tickets for the World of Outlaws Morton Buildings Late Model Series event at Davenport Speedway can be purchased at the track on race day, by visiting worldofoutlaws.com/tix or by calling (844) 347-8849 any time before the event.

WHAT TO WATCH FOR: Southeast tripleheader on tap for World of Outlaws