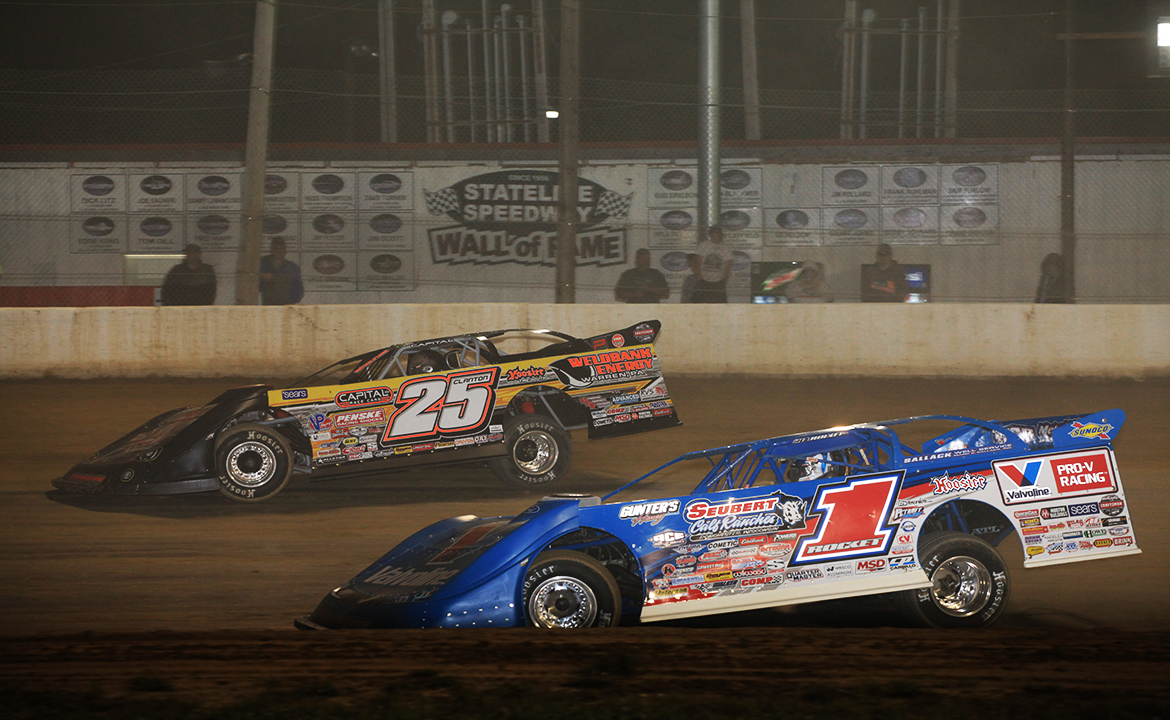 The World of Outlaws Morton Buildings Late Model Series gets set to race at The New Stateline Speedway for the fifth time in Series history next Thursday, Sept. 19, featuring a 50-lap, $10,000-to-win Morton Buildings Feature.

From that point forward, Stateline fans waited almost seven years for the Series’ return in June of 2013, when “The Georgia Bulldog” Shane Clanton picked up his first win at the third-mile track on his wife Michelle’s 25th birthday. The victory was his fourth of that season, tying his then-season-high for most in a single season.

The Series made another return for the first time since Clanton’s win in June of last year, where a bit of controversy surrounded the finish of the 50-lap main event. Chris Madden led the first 34 laps of the race until a restart of lap 35, where contact was made between he and Brandon Sheppard going into turn one, sending Madden around and to the rear of the field under the yellow.

This handed the lead over to Sheppard, who held it the rest of the way to claim his fourth tour victory of the season. Local standout Darrell Bossard of Titusville, Pennsylvania, finished second while season champion Mike Marlar rounded out the podium.

Sheppard will come into Stateline holding a massive 254-point lead in the Series standings over Rookie of the Year frontrunner Ricky Weiss. Sheppard aims to become the first driver in World of Outlaws history to win 19 Features in a single season next Thursday, which will break the all-time record that he and four-time Series Champion Josh Richards reached in each of their last championship-winning seasons.

Weiss has had four top-five finishes in the last five World of Outlaws races and has come very close to scoring the first tour victory of his career several times this season. Stateline could very well be the place he cashes in.

Clanton currently sits third in points with three wins, 11 top-fives and 28 top-10s in 33 starts, 284 points behind Sheppard. Chase Junghans scored a win in at Red Cedar Speedway in Wisconsin back in mid-July to compliment his 13 top-fives and 25 top-10s, leaving him fourth in points. Three-time Series Champion Darrell Lanigan has yet to score a victory so far in his first year back as a full-time Outlaw, after spending three seasons driving at the national level for Clint Bowyer Racing. He rounds out the top five in points, 318 behind Sheppard.

A heap of local and regional competition is expected to join the Outlaws at Stateline, including but not limited to former original Outlaw Chub Frank, Doug Eck, Max Blair, Dave Hess, Breyton Santee and Matt Lux.

Also joining the Outlaws in the program will be Outlaw E-Mods and RUSH Late Models, scheduled for a 7 p.m. Hot Lap time.

Tickets for the World of Outlaws Morton Buildings Late Model Series event at The New Stateline Speedway can be purchased at the gate on race day – ages 10 and under FREE, $15 for students ages 11-17 and $30 for adults. A family pack of tickets for two adults and up to four children can be purchased for $80.