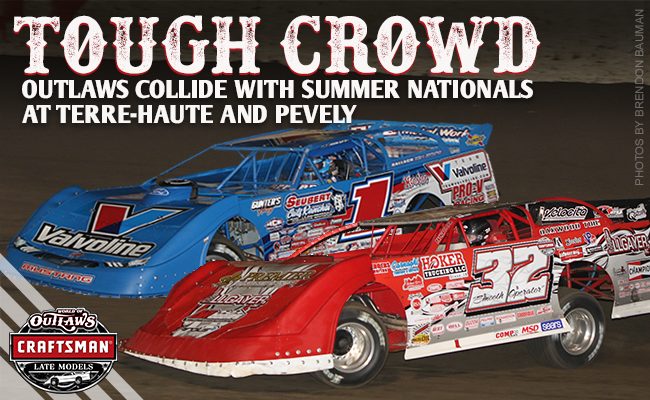 CONCORD, NC – June 19, 2017 – The World of Outlaws Craftsman® Late Model Series and the DIRTcar Summer Nationals tour are set to meet for two star-powered showdown races later this month. The best Dirt Late Model racing has to offer will battle head-to-head on June 30 at Indiana’s Terre-Haute Speedway before starting July at Federated Auto Parts Raceway at I-55 in Pevely, MO on July 1.

For the World of Outlaws Craftsman Late Model Series drivers, the challenge events against the Summer Nationals stars conclude a busy stretch of six races in 11 days in four different states. A World of Outlaws race already brings a wildly talented group of wheelmen, but adding the talent of the Summer Nationals tour drivers to the field adds another layer of difficulty.

“It definitely gets a lot more difficult,” said current World of Outlaws point leader and 2013 Summer Nationals champion Brandon Sheppard of New Berlin, IL. “There’s a lot of tough competition that run that series. When you mix the two of them together, it makes for a heck of a field of cars. There’s definitely a lot of good competition that we’ll be running against, but that’s the fun of our sport.”

Most drivers will maintain the same routine for the challenge races, but enter the event knowing they have to be at the top of their game. The level of difficulty is a little higher for full-time Outlaw Devin Moran of Dresen, OH, who will see both Terre-Haute and Pevely for the first time in his career.

“I’ll definitely watch quite a bit of video of those tracks and just get a feel for what’s going on,” Moran said. “Other than that, there’s not much I would change. We try to be 100 percent prepared for every race we go to. Hopefully we show up and run pretty decent.”

For the drivers running the full DIRTcar Summer Nationals tour, also known as the “Hell Tour” for its schedule of 29 races in 32 days, the battle against the Outlaws is dropped in the middle of the grueling tour. Adding the Outlaw competitors to the field only increases the difficulty of winning on the already star-studded tour, said two-time and defending Summer Nationals Champion Bobby Pierce of Oakwood, IL.

“You have a tough bunch of guys that run the Hell Tour and then the Outlaw guys come in and their stuff is going to be a little bit more fresh than ours by that time,” Pierce said. “It’s going to make it a little tougher on us.”

During such a grueling and busy stretch of races for both series, the key to success is maintaining cars at their peak performance. Achieving that goal while operating on the road and undertaking maintenance tasks in parking lots is even more difficult than it sounds. Preparing for each night starts well before race day.

“It still all happens in the race shop,” said Moran. “Before we leave we want to be 100 percent prepared. We’ll have an extra car and extra parts. We could probably build an entire car, minus the frame, in the race hauler. That’s really the key when we’re out travelling – we have to make sure we have everything.”

“We try to start off with our stuff as fresh as we can and keep plenty of spare stuff with us,” Sheppard agreed. ”That’s the difficult part – running all those races and keep your stuff maintained and up to par or where it needs to be.

The benefit for veteran drivers will be their experience at each track. Terre-Haute and Pevely offer drastically different configurations on consecutive nights of competition and force each driver to be increasingly versatile. Drivers will have to tackle the half-mile at Terre-Haute and then the tight confines of Pevely’s enclosed quarter-mile. However, both groups of drivers are accustomed to travelling to various venues.

“I don’t think it will be as hard because the one thing with the Summer Nationals that really benefits you as a driver is when you go to all of these different tracks, it helps you adapt really quick to different track conditions and track types,” Pierce said.

“We’ve been really consistent all year long and we race two or three different tracks every weekend, so it won’t be anything different to go from one track to another,” Sheppard said as a matter-of-fact.

While Moran hasn’t turned a lap on either track, he’ll use the experience he has gained travelling with the Outlaws to his benefit.

“One of my favorite things about racing is going to new tracks,” Moran said. “Terre-Haute is a one of a kind racetrack. We don’t go to many places that are a big half-mile and flat like that. I’m really excited to go to Pevely. It’s definitely an action-packed racetrack. I’m excited to get there.”

The challenge races are events many drivers look forward to, despite the extra layer of competition. Defeating the best in both series allows for some bragging rights.

“I wouldn’t be surprised if you saw a World of Outlaws guy and a Summer Nationals guy battling for the lead both nights,” Pierce said. “It’s going to be tough.”

Sheppard in particular is looking to make-up for a previous visit to Terre-Haute where he led the majority of the race, but had the win stolen late in the race.

“I ran Mark Richards’ car there in 2012 at the Summer Nationals race and I think I led all but the last five laps when we knocked the nose off up in the cushion,” Sheppard said. “I’m kind of looking forward to going back there and getting some revenge.”

For Moran, it’s a chance to run against one of his good friends in Pierce with some friendly bragging rights on the line.

“I’m definitely excited to go race with the Summer Nationals guys,” Moran said. “Living in Ohio, I don’t get to do that a whole lot. Going out there and racing with one of my good buddies Bobby Pierce, I hope I put it on him those couple of nights.”

For additional event information on the World of Outlaws Craftsman Late Model Series versus the Summer Nationals Tour at Terre-Haute Speedway on June 30, visit www.terrehauteactiontrack.net/2017-schedule and at Federated Auto Parts Raceway at I-55 on July 1, visit www.federatedautopartsraceway.com/race-events/.