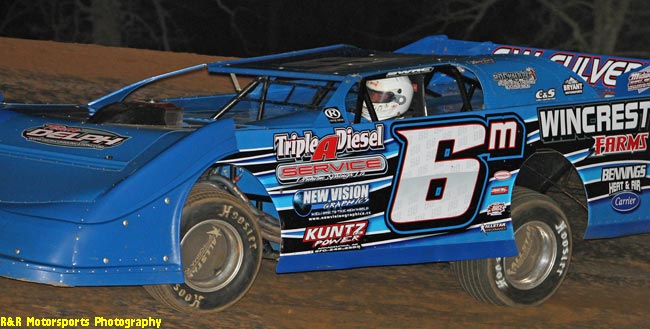 It was Wallace, after all, who stood in Victory Lane nearly 16 years ago the last time a national dirt Late Model tour visited the quarter-mile, high-banked oval known as ‘Hammer Hill.’

“I-30 is way overdue to have a big Late Model show,” said Wallace, an accomplished driver from Batesville, Ark., who will celebrate his 47th birthday on Saint Patrick’s Day. “I can’t believe (I-30 promoter Tracey Clay) ain’t had one in so long, but that’s making this World of Outlaws race an even bigger deal. I think she’ll pack the place (on March 22).”

Wallace will be one of the entrants chasing the checkered flag in the 50-lap WoO LMS A-Main, which boasts a $10,000 first-place prize that matches the winner’s purse Wallace received for capturing I-30’s last major full-fender affair, a Hav-A-Tampa/UDTRA Dirt Late Model Series event on Aug. 1, 1997.

Not surprisingly, it’s the five-figure payoff Wallace collected for his Hav-A-Tampa/UDTRA triumph at I-30 which remains his fondest memory of that milestone evening.

“Man, that race was many moons ago,” said Wallace, whose 25 career Hav-A-Tampa/UDTRA victories rank him fourth on the alltime win list of a tour that ran from 1993-2004. “I barely remember what I did last week, so I don’t remember a whole lot about that race – who was second, where I started, what happened.

“But I still got the big (novelty) check they gave me for winning the race hanging here on the wall in my shop,” he added. “I can’t ever forget how much money I won that night.”

The 1997 score wasn’t the last time Wallace celebrated a victory at I-30 Speedway. Far from it – he’s won five times in his last six starts over the past four years at the track, which, since dropping the dirt Late Model division as a weekly attraction nearly two decades ago, hosts a handful of regional touring dirt Late Model series events each season.

Wallace’s sterling performance record at I-30 includes two MSRA tour victories in 2009 and three Comp Cams Super Dirt Series triumphs (two in ’11, one in ’12). What’s more, in 12 overall starts at I-30 over the past nine years, he’s finished outside the top five just once (eighth in an ’05 MARS DIRTcar Series show).

Wallace’s impressive I-30 results – not to mention his national profile, which includes victories in such crown-jewel events as the Dirt Track World Championship and Topless 100 – stamp him as a driver capable of outrunning the World of Outlaws invaders on March 22. But he’s been around long enough to realize that a slight hometrack advantage doesn’t go too far against a star-studded field that will include WoO LMS regulars such as Darrell Lanigan of Union, Ky., Josh Richards of Shinnston, W.Va., Rick Eckert of York, Pa., Shane Clanton of Fayetteville, Ga., and Tim McCreadie of Watertown, N.Y.

“We’ve had pretty good success there over the years,” Wallace said of I-30 Speedway. “It’s just a little, tight bullring that can be pretty racy, and I guess it kind of fits the way my driving style is. Some people don’t like it because it is short and tight, but we’ve always been able to get around it pretty good and run good down there.

“But I know that with everybody who’s coming in for this show, it’s gonna be maybe the toughest field the place has ever had. It’s not gonna be easy to keep our streak there (wins in each of his last three starts at I-30) going.

“We’ve got some experience there,” he continued. “But the guys that travel, they see these types of racetracks day-in and day-out, and after one hot-lap session they’re back on go and ready to roll. So really, I don’t think there’s no advantage for me. I might know a little more about what the racetrack’s gonna do, but then again, I ain’t been there in almost a year (last August was his last visit) and supposedly they’ve changed the dirt on it a little bit.

“And normally we don’t go there and run soft tires (the tire rule for I-30’s WoO LMS event is Hoosier 1300-compound or higher/American Racer 44-compound or higher with the southern durometer-punch rule of 40 in effect), so it’s kind of throwing a curve for me. Now, if we’d go down there and run hard tires like we normally run I’d kind of feel a little bit better about the situation, but with the pretty much open tires we’re on a pretty much level playing field.”

With I-30 Speedway sitting roughly a 90-minute drive from Wallace’s home, he’ll have plenty of family members and friends watching his exploits from the pit area and grandstands. He would relish giving them a night to remember by driving his self-owned Barry Wright Race Cars No. 6M, which this year is equipped with a Kuntz & Co. engine, to the checkered flag in the first-ever WoO LMS event contested in his home state.

Giving him even more incentive, Wallace has never won a WoO LMS A-Main. He actually was one of the original ‘Dirty Dozen’ drivers slated to follow the tour when it was re-launched in 2004 under the World Racing Group banner – he finished fifth in the first race of the circuit’s modern era, on Feb. 3, 2004, at Volusia Speedway Park in Barberville, Fla. – but he dropped off the trail early in the season and in limited appearances since then hasn’t been able to add a World of Outlaws victory to his resume. In 19 career WoO LMS A-Main starts he has four top-five finishes, with a second-place run on May 4, 2008, at Monett (Mo.) Speedway his career best.

“I’d love to get a big win against those Outlaw guys, especially in a race in my state,” said Wallace, who plans to follow up his I-30 assault by competing in the ensuing WoO LMS events on Sat., March 23, at Whynot Motorsports Park in Meridian, Miss., and Sun., March 24, at Duck River Raceway Park in Wheel, Tenn. “When they come into town you’re racing against some of the best in the business, so if you outrun them it’s a pretty good accomplishment.

“It seems like everything is going in the right direction so far this year. We were solid in our first race of the year (a sixth-place finish in the unsanctioned Pelican 100 on March 9 at Ark-La-Tex Speedway in Vivian, La.), and I’m going to take this weekend (March 15-17) off from Late Model racing to get our stuff ready for that Outlaw swing. We’re gonna try to give it everything we have.”

General admission to the program, which also includes racing for IMCA Modifieds and Street Stocks, is $25 with children ages 6-12 admitted for $5 when accompanied by an adult.

I-30 Speedway is located in the Arkansas capital city of Little Rock, on Alexander Rd. just off Exit 126 of Interstate 30.