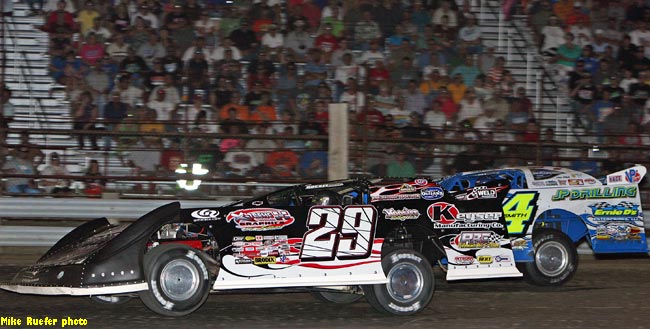 Who will it be tussling at the front of the pack on Monday night (Aug. 5) when the World of Outlaws Late Model Series visits Independence Motor Speedway for the third consecutive year?

There’s little doubt that the WoO LMS has a history of hot-and-heavy struggles for supremacy at Independence, a three-eighths-mile bullring that has seen both of its previous World of Outlaws events go right down to the wire. No one is expecting anything less in Monday’s 50-lap, $10,000-to-win A-Main.

“Little tracks like (Independence) usually keep everybody close together and the racing tight,” said Eckert, a WoO LMS veteran from York, Pa., who was outdueled for victory in ’11 by Shinnston, W.Va.’s Richards. “More often than not, you’ll see better racing on little tracks like that place. I don’t see why we won’t have another good race when we go back there.”

Eckert, 47, is one of only two drivers to finish among the top five in both WoO LMS A-Mains at Independence, placing second in ’11 and fourth last year. Senoia, Ga.’s Smith is the other, with runs of second last season and third in ’11.

A checkered flag is what both drivers crave, however, and they’ve fallen heartbreakingly short of that goal. They were shut out of Victory Lane by Richards and Union, Ky.’s Lanigan, the lone racers to capture a pair of WoO LMS championships since 2004.

In Independence’s inaugural WoO LMS event in 2011, Richards, then 23 and the tour’s two-time defending champ, had to fight off a stern late-race challenge from Eckert. Richards slipped just enough to open the door for Eckert to nose into the lead on lap 36, but the young sensation regained command the following circuit and kept Eckert at bay the remainder of the way to triumph by 0.611 of a second.

“I had to creep back down in front of (Eckert) and slow down,” said Richards, whose ’11 victory at Independence came just two days after he scored a $50,000 win in the USA Nationals at Cedar Lake Speedway in New Richmond, Wis. “I thought I gave the race away when he got under me, but fortunately I was able to get back ahead of him.”

Richards will return to Independence Monday for the first time since downing Eckert in 2011. He missed last year’s event while racing on the NASCAR Nationwide Series.

Lanigan, meanwhile, outdueled Smith last year in a feature that was even more hotly contested than the track’s first WoO LMS show. Like Richards in ’11, Lanigan lost the lead to Smith late in the distance – Smith led lap 42 by mere inches – before gathering himself and repelling his challenger down the stretch to win by 0.330 of a second.

Unlike Richards in ’11, however, Lanigan didn’t really enjoy the post-race ceremonies in Victory Lane. He joy was kept in check by the testiness shown by his good buddy Smith, who felt that he lost the race only because he was pushed up the track by Lanigan.

When Smith was asked about his runner-up finish during a post-race interview on the p.a. system, he could only mutter, “Uh….” before walking away in obvious disgust. After missing out on a golden opportunity to end a winless streak dating back to May 2011 – a winless streak that he has still not broken entering Monday night’s event – the driver known as ‘Cat Daddy’ wasn’t happy.

Lanigan noticed Smith’s contempt and actually left Victory Lane to talk with Smith. The two are close friends who travel together and share setup information on the road, so Lanigan clearly wanted to smooth things over.

The discussion went well, and, shortly thereafter in the pit area, Smith noted that it’s “hard to race with your buddy” and credited Lanigan, who was on a record-setting hot streak at the time of his win (Independence was his fifth straight WoO LMS triumph), with providing the setup tips that had put him in position to win. They headed out of the track together, caravanning to the next race.

One year later, both drivers recall their controversial battle without anger.

“Last year me and Darrell had different tire choices so that gave me an advantage in certain places late in the race,” said Smith. “We just kind of got tangled up a little bit. Actually, I should’ve been more aggressive at that time to get that one, but when you’re running bad you tend to not be that aggressive to preserve what you can get.”

“I hated to take it from Cat, but we gotta run our program too,” said Lanigan. “I’d like to see Cat get a win though, so whatever we can do this year to help him get, one we’ll do it.”

Smith, 48, has struggled this season, but he hopes his affinity for Independence will result in an uplifting outing on Monday night.

“I like that place,” said Smith, whose third-place finish in the 2011 Independence show came just two days after he flipped his car in a USA Nationals preliminary race at Cedar Lake. “It’s kind of a southern-looking place. The texture of the dirt wears tires a little bit, it’s smaller and has a little bit of bank. It’s got a distinctive line that pretty much suits my style of driving around the bottom.

“We need something good to happen, so hopefully going to Independence will be a positive for us.”

Eckert, meanwhile, has some strong incentive to reach Victory Lane at Independence as well.

“I got the pressure on me with my crew guy (Danny White) being from Iowa,” Eckert said with a smile. “He’s from Dubuque, about an hour east of there, so he’s gonna have a lot of family and friends there. We’d like to win out there for him.”

There will be plenty of other possible combatants for the first-place prize in Monday night’s action at Independence. The WoO LMS roster also includes such stars as Tim McCreadie of Watertown, N.Y., who will arrive at IMS hot off a $50,000 victory in Saturday night’s USA Nationals at Cedar Lake; four-time ’13 winner Shane Clanton of Zebulon, Ga.; Tim Fuller of Watertown, N.Y., Chub Frank of Bear Lake, Pa., and Bub McCool of Vicksburg, Miss.; and rookies Eric Wells of Hazard, Ky., and Morgan Bagley of Longview, Texas.

With Monday’s program also including the Karl Performance Hawkeye Dirt Tour presented by XSAN for the IMCA Xtreme Motor Sports Modified division, Independence officials are calling the event the biggest in the track’s history. The two touring series will share the same card for the first time.

Both pit and grandstand gates open at 4 p.m., but the pit area will be open throughout the afternoon for the traveling drivers. Hot laps are scheduled for 6:45 p.m. CT with qualifying to follow.

Independence Motor Speedway is located at the Buchanan County Fairgrounds.

More information on Independence Motor Speedway can be obtained by visiting www.independencemotorspeedway.com.