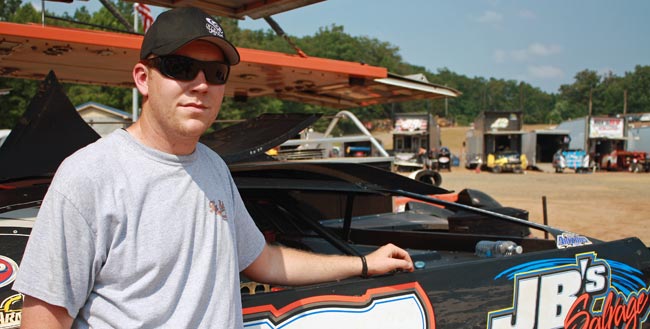 So it’s going to be a pretty big deal for Robinson, a 2012 World of Outlaws Late Model Series Rookie of the Year contender, to provide the car in which Kinser will make the first dirt Late Model start of his storied career on Wednesday night (June 6) at Eldora Speedway in Rossburg, Ohio. The King will compete in the ‘Feed The Children’ Prelude to the Dream, the eighth annual charity race that also features stars from NASCAR, IndyCar and NHRA.

“I’m excited about it,” Robinson said of his chance to work side-by-side with Kinser for a night. “I’m really looking forward to it. Since we went Late Model racing a couple years ago, running the Prelude with Steve is something I’ve wanted to do. I always thought, It would almost be like a dream to have Steve Kinser drive my car because we’ve always been friends.”

Robinson, 25, of Bloomington, Ind., has been acquainted with Kinser for his entire life. His father, John, is, at 65, seven years old than Kinser, but the two men with a shared hometown and love of dirt racing became friends in their 20s. John Robinson even traveled the WoO Sprint Car circuit with Kinser for several years.

While the younger Robinson eschewed the Sprint Car racing that dominates the central Indiana short-track scene in favor of stock cars when he decided to launch a driving career – he spent two years in Street Stocks and four in UMP open-wheel Modifieds before joining the dirt Late Model ranks in 2010 – his family remained close with Kinser.

“My father still talks with him a lot,” said Robinson. “We’re like 10 miles away from Steve. When he’s in town, we’ll jump down there and see him, maybe go out and have a bite to eat and drink a beer.”

During one of those meet-ups with Kinser a couple years ago, Robinson broached the possibility of the King driving his dirt Late Model. He had already run the idea past his father, who operates JB’s Salvage and fields his son’s racing equipment, and received a positive response. But Kinser’s reaction? Well, it was a bit indifferent.

“It can be hard to mention something to him and get a read on what he’s thinking, to figure out if he’s really interested,” said Robinson. “I asked him about driving our Late Model one time and he didn’t say anything, so I assumed he didn’t want to do it.”

But earlier this spring, Kinser changed his mind. He decided that, shortly after celebrating his 58th birthday and in the midst of a season that once again sees him in contention for a WoO Sprint Car title, he would climb into a dirt Late Model for the first time and compete in the Prelude at the famed Eldora half-mile owned by NASCAR star Tony Stewart, who also happens to own Kinser’s Sprint Car team.

“This year everything just kind of worked out,” said Robinson. “Of course, our program has gotten a little better and we’ve gotten more recognized, so that helps. But I think Tony (Stewart) was the main guy who got him to do it. He called Steve and said, ‘Will you do it?’ Then Steve contacted us and we said, ‘Sure, we’re all in.'”

Robinson and his crew, which is led by veteran mechanic Richie Davis, have prepared one of the team’s MasterSbilt cars for Kinser, complete with the King’s familiar No. 11 and primary sponsors, Bass Pro Shops and Tracker Boats. They made recent trips to Bloomington Speedway and Brownstown (Ind.) Speedway to test with Kinser in preparation for the Prelude.

“He was nervous because he didn’t know what to expect,” Robinson said of Kinser. “He was totally unfamiliar with a Late Model, but after I told him how to use the clutch he had it in high gear on the first try and went out there and was smooth. He tested the waters a little, and by the end we made a couple changes and he was really good.

“The big thing for him with the Late Model – other than the speed difference from the Sprint Car, and how you get into the corner – is the perspective is so much different for him. When he got in the car he said, ‘I can’t see my front tires.’ I said, ‘Well, it doesn’t matter how high you sit in these cars, you can’t see the front tires.’ Once he got past that and realized how wide the car was, he started getting comfortable.

“I think he was impressed by just how well a Late Model did drive. When he gets out there with other cars it’ll be completely different, but he’ll be fine. He’s the King, you can’t deny that.”

Following the Prelude, Robinson will keep his team’s hauler parked in the Eldora pit area and take his own shot at the high-banked ‘Big E,’ entering the DIRTcar UMP-sanctioned $100,000-to-win Dirt Late Model Dream by Ferris Commercial Mowers on June 8-9. He qualified for the 2011 Dream and finished 13th, but he also suffered a season-shortening shoulder injury during preliminary action for the 2010 event.

Robinson will return to the WoO LMS next week, making his first-ever visits to Hagerstown (Md.) Speedway on June 16 and Eriez Speedway in Hammett, Pa., on June 17. He sits second behind Bub McCool of Vicksburg, Miss., in the tour’s Rookie of the Year battle and 10th in the overall points standings.

Chasing the World of Outlaws schedule has been a sometimes frustrating education for Robinson, but he’s shown some flashes of his potential. His best outings to date are sixth-place runs – matching his career-best finish on the tour – on April 27 at North Alabama Speedway in Tuscumbia, Ala., and May 26 in the ‘Jackpot 100’ at Tyler County Speedway in Middlebourne, W.Va.

“We’ve had some good moments,” said Robinson. “Winning a heat and finishing sixth at North Alabama was nice. Finishing sixth in the 100-lapper at Tyler County was nice too, but we also qualified good and heat-raced good there and then missed (the setup) in the feature. That showed us how if you make one mistake for the feature, you’re out to lunch.

“It’s not demoralizing (to struggle), but it’s easy to think, I should’ve done this, or should’ve done that. That’s why we’re running this series though. We said at the beginning of the year that if we can go out, make shows and be competitive, then we’ll be happy because we’re learning.”

Robinson’s maturation as a driver shows itself when he competes in weekly events close to home on off WoO LMS weekends. He’s regularly running up front, with one win (on May 19 at Brownstown) and four runner-up finishes (two at Florence Speedway in Union, Ky., and one each at Brownstown and Moler Raceway Park in Williamsburg, Ohio) his top performances.

“When I go and run the local shows I really realize how much I have learned (on the WoO LMS),” said Robinson. “The level of competition on this deal is just so tough. If you give one inch – well, all these drivers have done it for so long, they’ll take that spot from you.

“I’m learning not only about the race car, but how to drive with these guys and be respectful. We continue to learn every time we get out there.”

The live commercial-free, high-definition HBO Pay-Per-View broadcast of the Prelude To The Dream, which benefits the Feed The Children charity, will begin at 8 p.m. EDT (5 p.m. PDT) on Wednesday (June 6) and be followed by an immediate replay. The show has a suggested retail price of $24.95 and is available to more than 92 million pay-per-view homes.

Ordering information is available at either www.PreludeToTheDream.org, www.HBO.com or through your local cable or satellite provider.