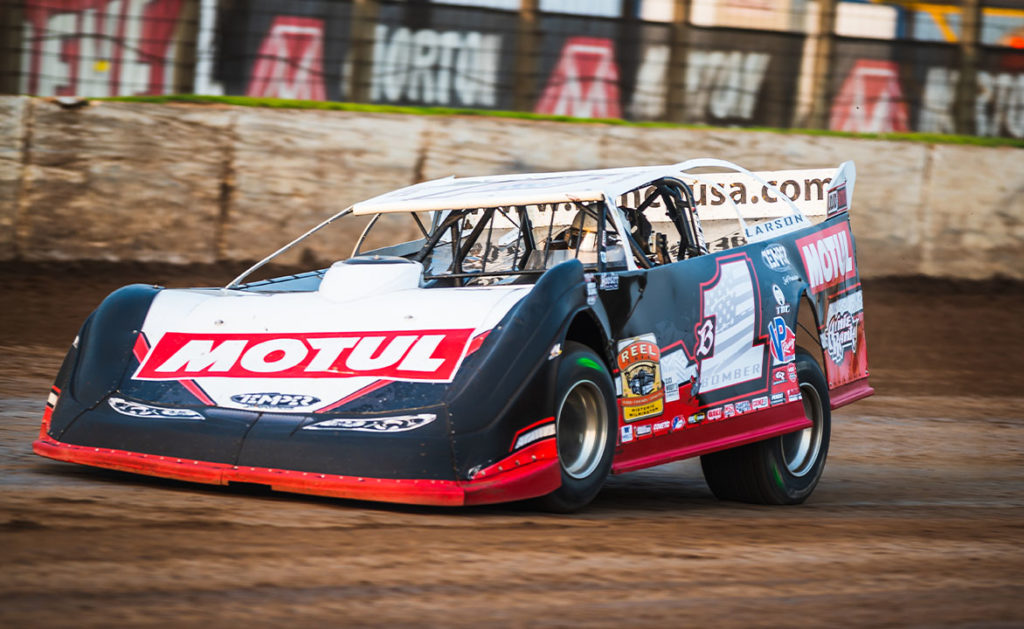 The Lake Elmo, MN driver is riding a career high with the World of Outlaws this season

This year, the Lake Elmo, MN driver, made two adjustments leading to his best season with the Series. And with four races remaining – including the Oct. 1 event at Cherokee Speedway, Oct. 2 event at Senoia Raceway and then the NGK NTK World Finals at the Dirt Track at Charlotte (Nov. 4-6) – he still has goals to do better.

One of those critical changes was switching to a Rocket Chassis after driving a Longhorn and Barry Wright Race Car last season. Driving a Rocket has allowed him to ask fellow Rocket teams on tour for advice while on the road.

“I think our chassis switch has helped, having had some guys to work with that have the same brand of chassis I do,” Larson said. “I really didn’t have that the last years I ran the tour; I was like the only Longhorn for a while, then we had a Barry (Wright) car at the end of last year, and even then, my results got better.

“The big thing is having some other racers and teams I can bounce things off of on the road with the Rocket Chassis.”

Another change that’s helped Larson this season is who’s working on that Rocket Chassis. Earlier this year, he hired Donnie Birdwell as his crew chief. It’s a change Larson stated has been beneficial.

“[Birdwell’s] been a consistent, stable, non-dramatic guy I can count on and help utilize to put fires out instead of him causing fires too,” Larson said.

Those two adjustments have made it easier to adapt on the road. In Larson’s fourth season with the World of Outlaws, he’s seen tracks multiple times allowing him to hit the ground running.

“We’ve seen some of these tracks now three or four times, which still isn’t that many compared to any of those tracks up in PA or South Carolina, and you’re racing against guys who race there every week,” Larson said. “Getting the experience on more of the tracks and tires and developing a notebook has been helpful.”

Changes aren’t only impacting Larson on the road but also at home. Earlier this season, his son Matthew started his racing career near the family’s Minnesota dwelling. It’s given Larson a new perspective on the racing world.

“It’s a different aspect, and maybe it gives me a little glimpse or look at what things may look like someday when I get out from behind the wheel.”

As the season starts to wind down for the Lake Elmo, MN driver, he knows time is running out to pick up his first World of Outlaws win. He’s hoping to finish the year on a good note, even if it means missing out on a trip to Victory Lane. Currently, he sits eighth in points – his previous best was 9th in 2019 – with eight top-10s and two top-fives – the most he’s collected in a year.

“Honestly, I missed a chunk of my goals I had set for myself this year,” Larson said. “I’m glad we’re going to Senoia [Raceway]; I really like that track. Cherokee is kind of hit or miss for me, and the same with Charlotte.

“I’m not setting super huge goals for the rest of the year; I’d like to get myself another top-five at Senoia at least and maybe have a good run at the rest of the two.”

Even if he doesn’t grab that top five finish at Senoia, he’s still building toward 2022.

His changes this year propelled him to the best season of his career—a path that could take Larson to new heights if he continues in the same direction.

Larson and the World of Outlaws Morton Buildings Late Models are back in action on Friday, Oct. 1, for the Mike Duvall Memorial at Cherokee Speedway in Gaffney, SC.