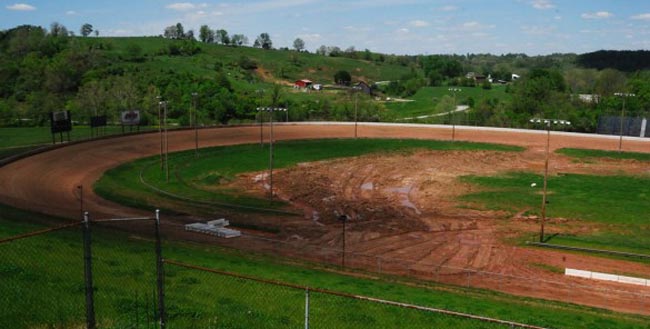 CONCORD, NC – July 18, 2011 – The World of Outlaws Late Model Series event scheduled for Sat., July 30, at West Virginia Motor Speedway in Mineral Wells has been canceled because the ambitious project to shorten the track is not yet complete, series and Mountain State Motorsports Promotions officials announced on Monday.

Construction work to transform the sprawling five-eighths-mile WVMS oval into a more fan- and competitor-friendly three-eighths-mile layout began in April, but a rain-filled month caused delays in the project that led to the postponement of the WoO LMS ‘RaceFest’ scheduled for May 28-29. Mountain State Motorsports Promotions hoped to complete the reconstruction effort in time to unveil the new track to fans and racers with a one-day WoO LMS show on July 30 but further delays made that deadline impossible to meet.

This year’s WoO LMS event at WVMS will not be rescheduled, but Mountain State Motorsports Promotions’ partners plan to bring the national tour to the track in 2012 for a two-day ‘RaceFest’ spectacular over Memorial Day weekend.

“Our World of Outlaws Late Model Series weekend last year was as successful an event as we’ve ever had at West Virginia Motor Speedway so it’s pretty disappointing to not be able to have it this year after having two opportunities to get it in,” said Strode, who co-promotes the facility. “We felt like we built a lot of momentum with the World of Outlaws race on the big track last year and were really looking forward to running it on the new (smaller) track, but unfortunately the construction work has taken much longer than we had anticipated and we won’t be able to host the World of Outlaws this year. We’ll have to work to reclaim that momentum in 2012.”

Strode said WVMS apologizes to fans and race teams for the length of the track reconstruction project but remain committed to finishing the new-and-improved speedway in the near future.

“There’s some things that we could have done to help (speed the construction) but only saw in hindsight and there are some things that were beyond our control – the whole month of April being one of those,” said Strode. “Just to be set back that far, that quick, gets you behind the eight-ball with a big project like this.

“We were still confident that we would have the shorter track ready by our rescheduled World of Outlaws date on July 30, but it didn’t work out. I’ll be honest – we left down there on June 25 after having the Monster Jam event and saw what was done…everything was very nice and I was really, really excited about what I saw with the layout and the design. But in the back of my mind I just knew there wasn’t enough done. At the rate it was going, it was gonna have to really speed up to be ready in time (for July 30). After seeing the progress that made over the next couple weeks, we knew it wasn’t gonna be done in time.