Wells and Ogle Jr. Make A Shot to Tennessee 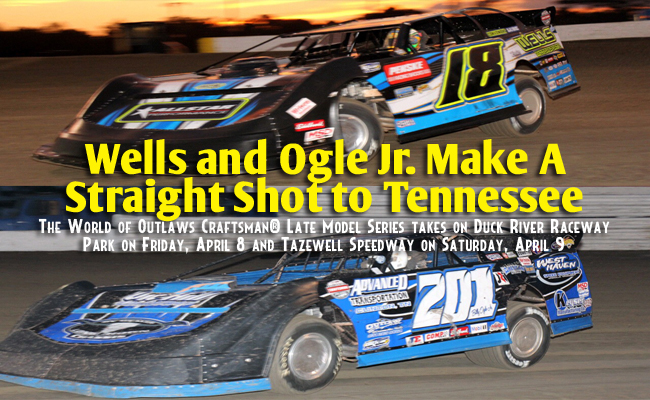 Wells and Ogle Jr. Make A Straight Shot to Tennessee

CONCORD, N.C. – April 6, 2016 – To this day, Eric Wells still thinks luck played a role in his first World of Outlaws Craftsman® Late Model Series victory at Duck River Raceway Park in 2013. But, winning this weekend may prove that it is more than luck.

With the first victory, Wells became the fifth driver in the series’ history to win an A-Main while chasing the Rookie of the Year honor (Fuller (’07), Brian Shirley (’07), Austin Hubbard (’10) and Bub McCool (’12)), which he ended up winning at the end of the 2013 campaign.

“It was unexpected to say the least,” said Wells about the race. “The weather was bad, everyone was complaining. But, we had to make the best of what we had.”

Wells has four big-pursed career wins, but his first with the Outlaws is special – in front of a near capacity crowd for coincidentally Duck River’s inauguration into the series circuit. This weekend offers him the chance to relive the action – not only trying for his first 2016 win (second series win), but also breaking into the Top 10 in the points race (12th-792).

The race in 2013 remains vivid in his memory: a late pass for the lead and a classic shootout between fellow Kentucky-native Darrell Lanigan for the win. Oddly enough, the three front-runners in a 30-car field collided at lap 47. Three laps left. Wells avoided the scramble, taking the lead. He went on to beat Lanigan by 0.696 of a second.

“We rode off the high of that win for two or three months,” Wells said. “It’s pretty incredible. It’s the only win we got. The competition is really high and those wins are hard to get.”

Wells placed 8th in 2014, while Langian avenged the previous close-margined loss by winning the feature; it was Lanigan’s 57th victory of his series record 72 A-Main wins. Now with a year’s separation between these series of events, Wells will look to Duck River again.

“It’s easy to lose focus and get tunnel-vision in racing,” Wells said. “It’s so demanding of your time and focus. But I guess what keeps us doing it is the lack of being able to dominate and conquer. We’re excited to go back to a track we’ve had success at.”

As for Billy Ogle Jr., he returns to Tazewell Speedway April 9, no more than 50 miles from his home in Knoxville, Tenn. Proximity is not where he finds solace, but in what the track means to him. To Ogle, the track is where his first World of Outlaws Late Models Series victory was in 2015.

In stunning fashion, Ogle found his window to the top-spot on the last laps of Tazewell Speedway’s Varner Ford 50. He was running third behind Josh Richards and then-series points leader Shane Clanton for most of the race until…

Lap 42: A fading Clanton leaves room for Ogle to continue his prowl to the front.

Lap 49: Ogle dove into turn two and using his car as a wedge passed Richards. Richards attempted to reclaim first in Turn 3, but Ogle shut the door and sails to the checkers.

Ogle knew he had to make a move on the last lap:

The 2015 win was a check off Ogle’s bucket list; Ogle spent the early years of his career racing weekly at Tazewell’s high-banked third-mile oval. Ogle – like Wells – will try for his second career series win at the very track where he won his first.

Tickets for the World of Outlaws Craftsman® Late Model Series events at Duck River Speedway and Tazewell Speedway are available at the gate on the day of the event.