WE MEET AGAIN: Lanigan Returns to Rocket Chassis for 2021 World of Outlaws Run with Viper Motorsports 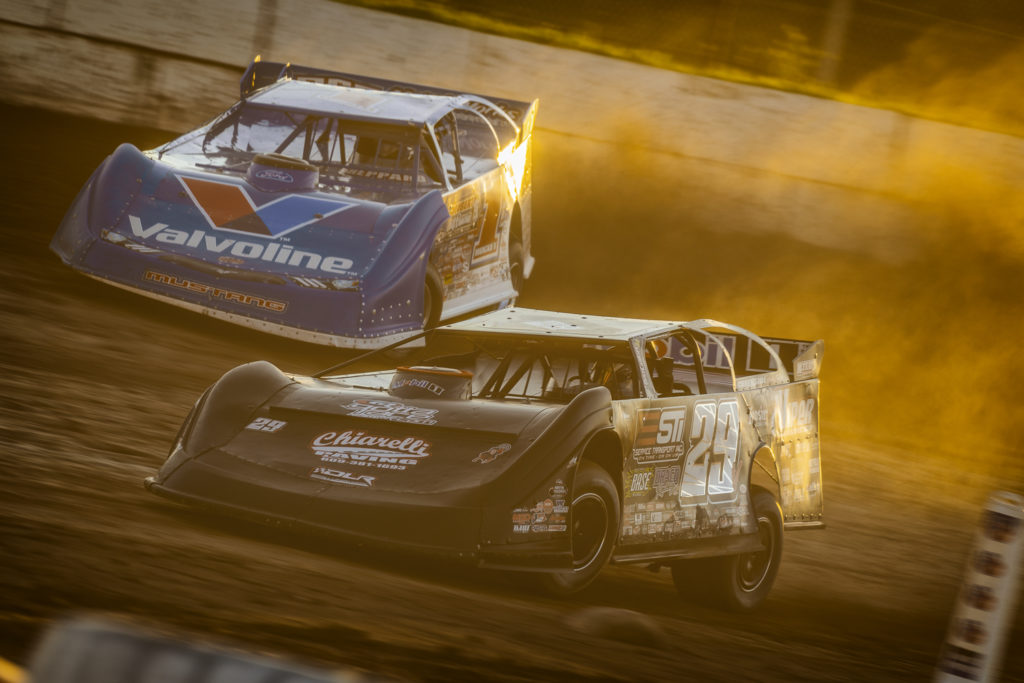 Next year, Darrell Lanigan will return to a familiar position when he chases his fourth World of Outlaws Morton Buildings Late Model Series championship aboard a Rocket Chassis.

Keeping his seat with Shawn and Lisa Martin of Carlisle, Penn., Lanigan of Union, Ky. will still fly the Viper Motorsports colors aboard his No. 29V, but most notably will switch from the Barry Wright Race Cars house car to a Rocket Chassis ride built in Shinnston, W.V.

For The Bluegrass Bandit, it’s a homecoming of sorts. Two of Lanigan’s World of Outlaws titles (2008, 2012) came aboard a Rocket Chassis and for years, he was known as a close friend to Mark Richards, the manufacturer’s co-owner. While excited for his new ride, the 50-year old is grateful for his opportunity with Barry Wright.

“I love Barry and them to death, and they work hard and they’ve got a good piece,” Lanigan told DirtonDirt.com about the legendary 69-year old Wright. “It’s just hard on the road with something a little bit different from what everybody else has. I feel like I’m more comfortable in the Rocket stuff or my stuff in general.”

For Martin, who never takes for granted his opportunity to work with the soon-to-be National Dirt Late Model Hall of Famer, he believes in his team more than ever heading into 2021. With the addition of Rocket Chassis to the stable and a fleet of Clements Racing Engines at their ready, Viper Motorsports is prepared to give Lanigan his best shot at tying Josh Richards for the most championships in World of Outlaws history at four titles apiece.

“For me and my wife, it was one of the greatest privileges we have ever had to work with Barry Wright and be the house car owners for them in 2020,” Martin mentioned on his tenure with BWRC. “It’s something we’ll always cherish. I love them guys. Barry, Lance, the whole family. They’re beyond great people, and I wish them all the best in whatever endeavors they take in 2021.”

Matching Rocket1’s triple threat of crew members (Danny White, Austin Hargrove, Joel Rogers), Viper will also supply Lanigan with a trio of their own in the pits. Transitioning Adam Logan to the crew chief role, the No. 29V also brings Will Harris and Cory Lawler to the operation, which will be based at Lanigan’s pristine Union, Ky. shop.

“It’s gonna take the pressure off [Darrell] havig multiple crew guys to do things,” Martin admitted on the addition to the team. “We’re promoting Adam to crew chief and he’s gonna run the team basically. Darrell’s gonna have the chance to do his things with shocks and springs and drive the car, but he’ll have a great supporting cast to try and come back in 2021 and be competitive every night.”

Rekindling his relationship to Rocket is a throwback to years past for Lanigan, who was once inseparable from Mark Richards. If you saw big blue rolling down the interstate, Lanigan’s black rig wasn’t far behind. At every track, you could always find the pair pitted next to each other.

It was no secret when the duo infamously split at Volusia Speedway Park’s DIRTcar Nationals in 2013, however. Following an on-track incident with Mark’s son, Josh Richards, Lanigan loaded up and returned the next day with a parking spot all the way down in the lower Gator pond, electing to camp with the Super DIRTcar Series competitors far away from big blue.

Only nine months later, Lanigan was out of the door at Rocket entirely, venturing away to establish his own business and build cars with Ronnie Stuckey at Club 29 Race Cars.

In his first season at Club 29, Lanigan set the World of Outlaws ablaze. His post-Rocket tenure quickly took off as the single most dominant season in series history at that time. On his way to a third-career championship that year in 2014, Lanigan won an astounding 17 features with another 28 podium finishes and 34 top five results to his unmatched resume.

“There’s a lot of work that goes into building your own deal,” noted Lanigan, who built Club 29 Race Cars from 2013-19. “I just want to get back into Mark’s stuff and concentrate on racing instead of trying to build cars.”

“I think we just needed to make a change, and if we wanted a chance to win a championship again, I think this is the direction we need to go,” said Lanigan on his return to Rocket. “Where I’m at in my career, I need to do something as far as getting into a car that is established. I know my stuff was good and Barry’s was too, but Mark’s stuff is winning races all the time. He’s got it figured out.”

Richards, who has built Rocket Chassis into a modern-day dynasty in dirt late model racing, understands that time heals wounds and more importantly, he’s welcoming one of the nation’s most competitive racers back into his equipment to represent them.

“Obviously, time changes things,” Richards said to DirtonDirt.com. “Darrell and I were always good friends, but as far as hanging out and running around together? I don’t know if I do much of that anymore anyways. Back in those days when we were traveling together, we were younger. Things have changed to where you just don’t go do all of the things you used to do, so we’ll see what happens.”

Lanigan’s second act with Rocket Chassis will begin in less than two months when the World of Outlaws Morton Buildings Late Model Series opens the 2021 schedule with Volusia Speedway Park’s Sunshine Nationals on January 14-16. Tickets for the event are available HERE.

WHAT TO WATCH FOR: World of Outlaws Late Models Prepare for Kentucky/Ohio Swing

World of Outlaws to make debut at Mississippi Thunder Speedway