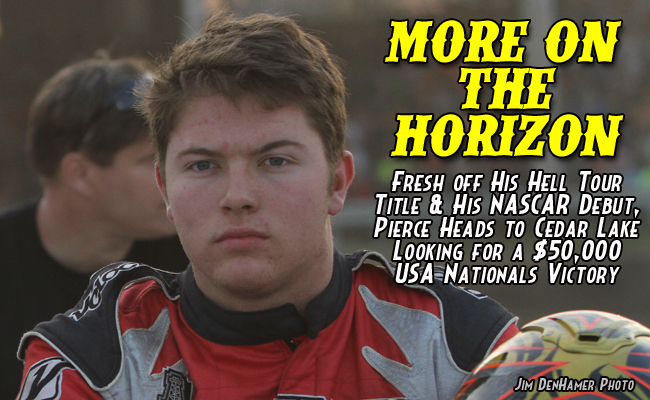 Pierce Heads Back To Cedar Lake Speedway Looking To Add $50,000 USA Nationals Victory To His List Of Summer Accomplishments

NEW RICHMOND, Wis. – July 27, 2015 – The summer of 2015 has been good to Bobby Pierce. It could get even better when the 18-year-old Oakwood, Ill., driver returns to Cedar Lake Speedway this weekend for the 28th annual USA Nationals.

“It’s definitely one of my goals to put my name on the back of the USA Nationals t-shirt,” said Pierce, who led nine of the final 20 laps of last year’s 100-lap USA Nationals feature before finishing second to Jimmy Owens of Newport, Tenn. “To win it would just be huge.

“Ever since I went to Cedar Lake and the USA Nationals for the first time, it was a race that I always loved and wanted to win. We were close last year, so hopefully this time we can go back and get it done.”

Pierce will chase a coveted USA Nationals Eagle Trophy with plenty of momentum from his stellar summer. During June and July, the second-generation racer piloted his father’s Pierce Race Cars house car to a pair of Summer Nationals victories and recorded 11 top-five finishes on the grueling month-long series.

In becoming the Midwestern tour’s youngest champion, Pierce topped Billy Moyer Jr. of Batesville, Ark., by a mere 10 points. To score the tour’s $25,000 champion’s pay, Pierce often found himself focusing on logging strong finishes instead of taking chances to win races. He’ll have a much different approach when he chases the $50,000 winner’s paycheck at Cedar Lake.

“Winning a Summer Nationals championship is another one of those things that I just always wanted to accomplish,” said Pierce, who with his father Bob now ranks as the only father-son combo to claim the title. “It was really cool, but I’m definitely looking forward to not worrying about any points or anything like that and really going (to Cedar Lake) just thinking about doing what I need to do to win.”

Pierce’s Summer Nationals championship shows how far he has come in his short dirt Late Model career, but his performance in July 22’s NASCAR Camping World Truck Series 1-800-Car-Cash Mudsummer Classic at Eldora may be a preview of where he’s headed.

After dabbling in asphalt racing over the past few seasons, Pierce took advantage of NASCAR’s only dirt race and impressed the NASCAR world by swapping the lead with sprint car ace Christopher Bell multiple times before settling for a runner-up finish in Mike Mittler’s MB Motorsports entry.

“The (truck race) had a lot of TV coverage and was really crazy how many people have taken interest in what we’re doing,” Pierce said. “It’s crazy when you look at all the followers we’ve picked up on Facebook, Twitter and Instagram and all that.

“We definitely gained a lot more fans, and I hope a lot more people became dirt fans as well. With Christopher Bell winning it, me in second and Tyler Reddick in third, it was kind of cool for the dirt world and maybe it attracted more people to what we’re doing and the good drivers that race on dirt.”

While he doesn’t have any firm plans for future asphalt action, Pierce hopes to build on his solid start to his NASCAR career if the opportunity arises.

“We’re hoping to do some more asphalt racing and maybe some more Truck Series races,” Pierce said. “If the opportunity (to pursue a NASCAR career) presents itself, I certainly would like to try it. But I love dirt racing and I’m definitely focused on it and trying to do the best I can and win races.”

NASCAR may become part of his future plans, but for now, Pierce is fully focused on his dirt endeavors as he prepares for the USA Nationals this weekend. Pierce likes his chances of breaking through for his first crown jewel victory, but he knows it’ll take a stellar performance to get it done.

“Cedar Lake is definitely one of my favorite tracks to go to,” Pierce said. “It’s a nice facility and I love racing there. It’s a big race that everyone wants to win with a lot of good competition. It’s a race where you really have to be on top of your game because everyone there is so good.

“I think we have a pretty good shot. I’m definitely excited about it after the run we had last year. You don’t really know how many of those chances you’re gonna get. Hopefully we can go back and put ourselves in a good position and start up front again this year, then take advantage of it in the feature.”