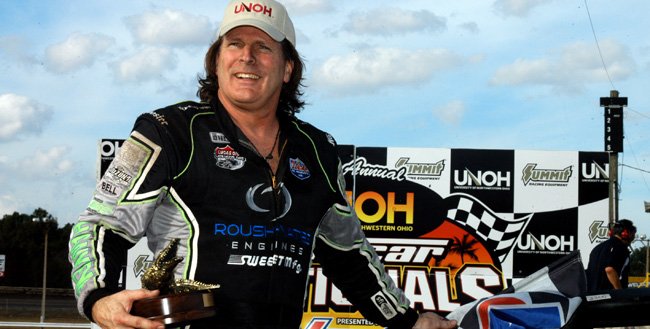 In an event pushed to Friday afternoon following a rainout on Wednesday night, Bloomquist took advantage of starting from the pole position to lead the entire feature distance. He was never seriously challenged en route to a $7,000 triumph.

The 48-year-old dirt Late Model legend scored a runner-up finish in Thursday evening’s World of Outlaws Late Model Series 50-lapper that was contested on a heavy, physical track surface, but on Friday a surface baked hard by the Florida sun allowed him to cruise to the checkered flag.

“Talk about night and day – that’s what this was,” said Bloomquist, comparing the Thursday night and Friday afternoon programs. “We really didn’t have to change much on the race car though, just a couple small things. The (Team Zero by Bloomquist) car is very versatile, and the (Roush-Yates) engine is just awesome.”

Bloomquist owed much of his winning effort to his qualifying performance. With the four fastest drivers in each of six group qualifying sessions inverted for heat-race action, Bloomquist turned in a lap that was placed him on the pole for his preliminary. He won the heat with ease and then picked the number one starting slot for the feature, propelling him to Victory Lane.

“It’s tough to come from behind, especially in a day race like this,” said Bloomquist, who recorded his fifth win since 2003 at Volusia but just his second in UMP-sanctioned competition (his most recent wins – one in ’04 and two in ’11 – came under the WoO LMS banner). “So definitely, starting from the pole was important.

“This is the first time (he ran an afternoon event at Volusia), so we really weren’t sure what to expect,” he added. “I tried to take it easy on the tires. It looks like we used ’em up pretty good, but didn’t blister them. The car was good neutral.”

Bloomquist drove away from the pack after the race’s two caution flags, on the opening lap for a multi-car tangle in turn one that eliminated Thursday-night WoO LMS winner Dennis Erb Jr. of Carpentersville, Ill., and Austin Hubbard of Seaford, Del., and on lap 10 for the stopped car driven by Tuesday-night UMP Late Model victor Billy Moyer of Batesville, Ark.

Dennis ‘Rambo’ Franklin of Gaffney, S.C., finished a distant second, 5.960 seconds behind Bloomquist in the AES Racing Barry Wright car. The veteran racer, who started third, passed outside-polesitter Clint Smith of Senoia, Ga., for second on lap one and maintained the spot to register a career-best outing at Volusia.

Rounding out the top 10 was Morgan Bagley of Longview, Texas; Jonathan Davenport of Blairsville, Ga., who fought forward from the 10th starting spot; DIRTcar Big-Block standout Billy Decker of Unadilla, N.Y., who slipped to eighth after taking the green flag from the fourth spot; Don O’Neal of Martinsville, Ind.; and Jim Yoder of Selinsgrove, Pa.

The UNOH DIRTcar Nationals Presented by Summit continue on Friday night with the second half of the day/night doubleheader. A 40-lap UMP Late Model feature paying $10,000 to win tops a program that also includes the Super DIRTcar Series Big-Block Modifieds.

For more information on the DIRTcar Nationals by UNOH, log on to www.DIRTcarNationals.com.