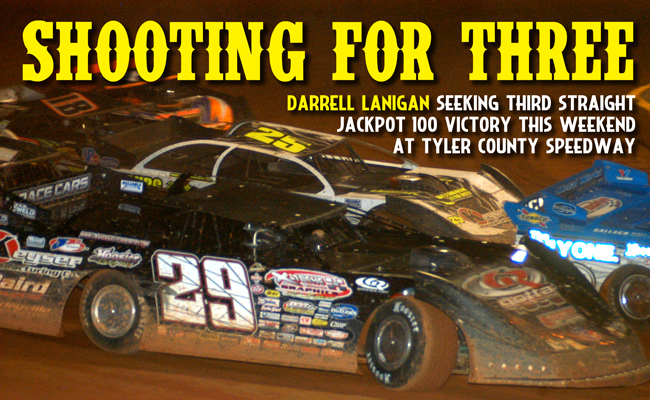 MIDDLEBOURNE, W.Va. – May 20, 2014 – After a couple busy weekends of World of Outlaws Late Model Series racing below the Mason-Dixon line, the Mountaineer State will welcome one of its largest dirt late model events of the season with the running of the Third Annual “Jackpot 100” at Tyler County Speedway on Saturday-Sunday (May 24-25).

The $20,000-to-win Memorial Day Weekend event is the World of Outlaws Late Model Series’ annual visit to the John Watson-promoted track known as the Bullring, and it’s the series’ only season visit to West Virginia.

Darrell Lanigan of Union, Ky., continues to lead the WoO LMS points by 98 markers over Rick Eckert of York, Pa. Lanigan will make a run at winning the Jackpot for the third consecutive season.

“We’ve had different cars most of the time we’ve been there (for the Jackpot 100),” Lanigan said. “You have to get up on the wheel and get it done. It’s a little tricky track, it gets really dirty and you gotta have a good setup.”

Lanigan’s small fleet of Club 29 Race Cars has not only been noticeable with the World of Outlaws, but around the country as well. “I think we’re definitely on top of the game right now, the cars are definitely great, got a good package under it, got a good team, good engine program going, you got to have a good program to put all the pieces together and if you get all the good pieces, it will definitely work.”

In regards to where Lanigan and team are with the building and putting more of his cars on the track, Lanigan says he’s fairly content with their program at this time.

“We’re branching out some, it’s definitely going to be in limited order this year,” Langian said. “We can only get so many cars done being on the road, definitely having Jimmy (Owens) out there helps, and Donald (McIntosh) and Kent Robinson, he’s been running well, we got a bunch of good drivers out there in the cars, they’re definitely helping our program and helping with feedback.”

Lanigan also feels the tire rule the series has in place has been helpful to the cost of their program and economical for everyone, especially as they roll into Tyler County this weekend.

“The tire situation is not that bad, starting on the (Hoosier) 1300’s definitely, I like that rule, it simplifies it a lot, takes some of the cost out of it, where you don’t have to have a bunch of that soft stuff with you. You gotta have good notes from the year before and know where you need to be,” Lanigan said.

Rick Eckert of York, Pa. sits in second spot behind Lanigan in the tour’s championship points and after a handful of top-five finishes in the Rocket Chassis House Car since the “Illini 100” Eckert is closing in on Lanigan for another series championship. Since Eckert’s move to the main Rocket in the stable, he hasn’t finished outside of the top-five except once with a fifth place run in his debut at Farmer City, Ill., fifth at Fayetteville, N.C., a third place finish at Lavonia, Ga., sixth at 201 Speedway and fourth in last Sunday’s event at Duck River Raceway Park in Tennessee.

But Lanigan says he is more worried about winning races right now and is not focused just yet on that elusive World of Outlaws crown at the end of the season.

“Honestly, we never look at the championship until we get towards the end of the year, right now we go out to win every race and it shows, we give it 100 percent no matter what it is and we’re there to win,” stated Lanigan.

For the Tyler County & upcoming Delaware event, teams will be allowed to race the Hoosier 1300 and up as well as the American Racer 44 and up. These tires must punch 40 or harder with the durometer.

An open practice on Friday Night May 23rd will be held with Live Entertainment to follow as well as a full show for the Renegades of Dirt Modifieds ($1,000 to win) and Stars Mod Lite Tour ($500 to win).

On Saturday Night May 24th the WoO LMS will be in action for Ohlins Shocks Time Trials and Heat Races followed by racing in the Stars Mod Lite Tour ($500 to win), Renegades of Dirt Modifieds (Twin $1,000 to win mains) and Heat Races for the Fastrak Pro Late Models.