Skip to content
Time To ‘Cowboy Up’ In Wyoming
Tags: 2011News 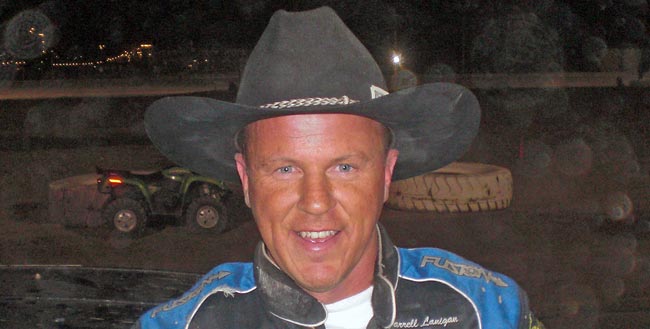 Who Will Wear A Cowboy Hat In Victory Lane At Wyoming Track?

They are, after all, the only drivers who have happily donned a cowboy hat after winning the World of Outlaws Late Model Series ‘Cowboy 50,’ which returns to the competitive one-third-mile Wyoming oval’s schedule this Tuesday night (July 19) after a one-year hiatus.

Tuesday’s event – the farthest west that the WoO LMS will trek during the 2011 season – offers a $10,000 top prize. There’s also the now-traditional post-race photo of the winner wearing a cowboy hat, adding some levity to the intense action.

Both Fuller, 43, of Watertown, N.Y., and Lanigan, 41, of Union, Ky., are looking forward to their shot at reprising the ‘cowboy’ role at Gillette. Fuller won the track’s inaugural WoO LMS show in 2008 and Lanigan captured the second engagement in 2009.

“I’d like to wear the hat again,” said the low-key Lanigan, who did some guns-blazing motions with his hands for the photographers after his cowboy-hat coronation in ’09. “Whatever it takes to get the money – I’m good with it.”

“I’ll do anything for that 10-grand,” added Fuller, who is winless on this year’s WoO LMS. “I’d just like to be able to keep (the hat) this time.”

Fuller and Lanigan know that earning Gillette’s unique Victory Lane photo opportunity won’t be easy. They fought hard for their triumphs at Gillette, a track that holds a high ranking for competitiveness among the national tour’s regulars.

“It’s a good, racy, black-slick racetrack,” analyzed Fuller, who backed up his ’08 win with a solid fourth-place finish in Gillette’s ’09 WoO LMS A-Main. “It’s one of those places where if you’re going good, it don’t matter – you can get to the front. It’s so wide, I think you can always march to the front from wherever you start if your car’s right.

“I really like the place. The surface there is a lot like some tracks back home (in the Northeast), so I feel pretty comfortable there.”

Fuller’s victory in the ’08 Cowboy 50 represented a dramatic debut at Gillette for the WoO LMS. The race was a down-to-the-wire thriller that saw Fuller outduel Jimmy Mars of Menomonie, Wis., for the checkered flag.

After Fuller was overtaken for the lead by Mars on lap 42, he lost ground and it appeared he was headed to a runner-up finish. But a caution flag on lap 46 put him back in the game, bringing his tires to life for a last-ditch bid that brought the capacity crowd to its feet.

Working the middle line around the track, Fuller raced side-by-side with Mars for two laps before nosing ahead with the white flag flying. He held on to beat Mars by a mere 0.257 of a second.

“Actually, Jimmy Mars picked the right tire (compound) that night, but I had the caution fall at the right time for my tires,” recalled Fuller, who owns 12 career WoO LMS A-Mains but has not recorded a single top-five finish so far in 2011 as he battles to get his newly self-owned racing effort on track. “My tires cooled off (under caution) and they worked good again just long enough for me to roll around Mars. It was a heck of a race.”

Lanigan’s drive to the checkered flag in ’09 wasn’t quite so tense, but it was no runaway. He spent more than half the distance chasing Steve Francis of Ashland, Ky., before finally finding a route by to assume command on lap 34.

“The racetrack was excellent,” Lanigan raved after climbing from his car in ’09. “You could run all over it, and it’s a place where you don’t tear stuff up. I like tracks like this.”

“It’s been awhile since we were there, but it’s a wide track and has a good surface so I’m sure it’ll be a good race again,” said Lanigan, who has won a series-leading four A-Mains in 2011. “It really seems to slick up and widen out for the feature so you can race top-to-bottom, and that’s the way I like it.”

While most of the WoO LMS regulars have previous experience at Gillette, the circuit’s most recent winner, Tim McCreadie of Watertown, N.Y., will perform in front of the Wyoming fans for the first time. The 2006 series champion, who captured the ‘Wild West Tour’ event on Friday night at River Cities Speedway in Grand Forks, N.D., was not a World of Outlaws traveler in 2008 and ’09.

Other WoO LMS followers who will make first-ever starts at Gillette are 2010 Rookie of the Year Austin Hubbard of Seaford, Del., who sits fifth in the current points standings, and Rookie of the Year contenders Ron Davies of Warren, Pa., and John Lobb of Frewsburg, N.Y. A third ’11 rookie challenger, Pat Doar of New Richmond, Wis., has competed at Gillette in the past, most notably the ’09 event when he set fast time and finished 12th in the A-Main.

Two-time defending WoO LMS champion Josh Richards of Shinnston, W.Va., will attempt to shake the black cloud that has hovered over him at Gillette. He failed to crack the top 10 in both of his previous visits, finishing 13th in 2008 and 11th in ’09 after suffering a flat tire late in each A-Main.

The WoO LMS drivers’ roster on Tuesday night will also include current points leader Rick Eckert of York, Pa., whose previous Gillette finishes were eighth (from 20th) in ’08 and seventh in ’07; Shane Clanton of Fayetteville, Ga. (seventh in ’08/third in ’09); Chub Frank of Bear Lake, Pa. (third/ninth); Clint Smith of Senoia, Ga. (sixth/fifth); and Vic Coffey of Caledonia, N.Y. (10th in ’08).

Mars (second in ’08 and eighth in ’09 at Gillette) will head the list of challengers to the WoO LMS stars – a group that will also feature NASCAR veteran Ken Schrader. Schrader, who is on a month-long tour of dirt tracks throughout the Upper Midwest and Canada with his open-wheel Modified, is scheduled to drive Clint Smith’s second dirt Late Model in Tuesday night’s program.

The biggest local threat to the Outlaws will be Gillette’s Eddie Kirchoff, who has won three of the four DIRTcar Late Model features contested this season at his hometown track. Eric Mass of Rapid City, S.D., who also plans to enter Tuesday’s action, is the only other driver to reach Victory Lane in ’11 at Gillette.

One of the top dirt Late Model drivers in the Rocky Mountain region, Kirchoff earned up-front starting spots in both previous WoO LMS events at Gillette (sixth in ’08, fifth in ’09), but he wasn’t a factor in either A-Main. He picked the wrong tire compound in ’08 and finished 15th, and in ’09 he faded immediately after the green flag was thrown due to a “tight” setup and was credited with a 24th-place finish after he retired because his car’s front end was damaged in a tangle.

Race-day admission is $35 and pit passes are $40. Reduced-priced tickets can be purchased in advance until noon Tuesday at Tire Rama in Gillette for $30.

Additional info is available by logging on too www.gillettespeedway.com.