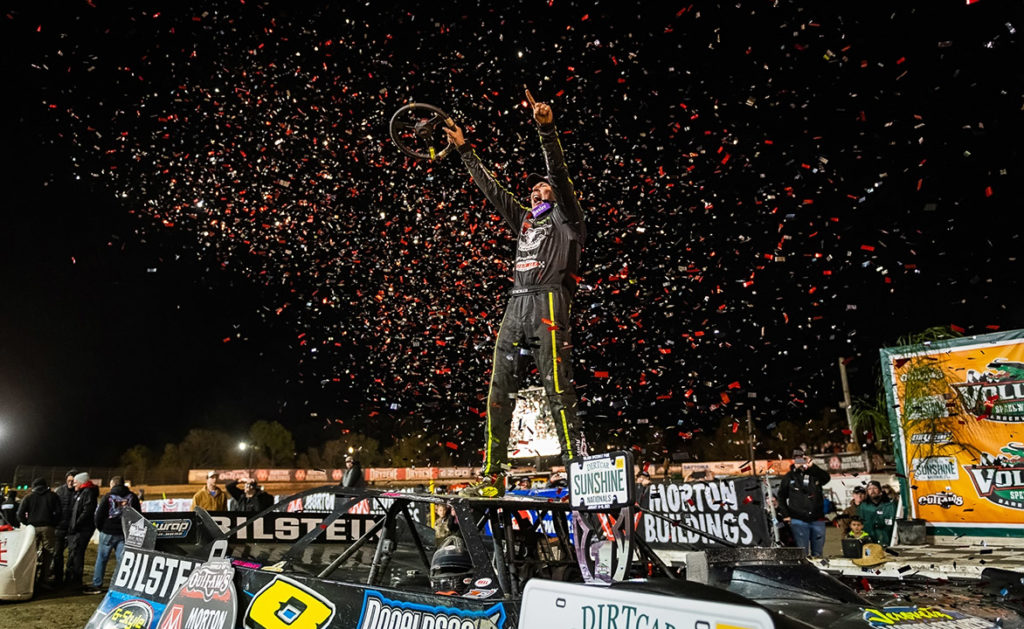 Kyle Strickler’s heart sank when he looked left with five laps to go.

In his 11th World of Outlaws Morton Buildings Late Model start – chasing his first World of Outlaws victory – the Mooresville, NC native had led all 35 laps up to that point, holding off Ross Bailes for the spot.

He knew Bailes could periodically get a good run and dive underneath him in Turn 1. It happened again with five laps to go. However, this time, it wasn’t Bailes. It was a legend; a champion; and his hero – “Black Sunshine” Scott Bloomquist.

“I seen the #0 (car of Bloomquist) down there and I’m like, ‘Oh, hell. This is not the right time here,” Strickler said with a chuckle.”

Strickler’s ability to not crack under pressure led him to his first World of Outlaws victory and the $10,000 payday during the final night of the Sunshine Nationals on Saturday at Volusia Speedway Park.

“I call Scott my dad,” said Strickler as he tried to formulate words while grasping what just happened. “I know there’s nothing like having the best in the business breathing down your neck for your first Outlaw win.

“Man, that’s awesome. That’s a Cinderella story right there to be able to hold him off for my first win. Man, this thing it was good tonight.”

Along with having to hold off Bloomquist for the victory, Strickler was tested throughout the 40-lap Feature.

After setting Slick Woody’s Cornhole Company Quick Time and winning the Drydene Heat Race, his fortune continued when he drew the pole for the Feature in the redraw.

From the pole, Strickler launched ahead of the field into Turn 1, but Rookie of the Year contender Ross Bailes had the better run off of Turn 2 and snuck underneath Strickler down the backstretch. Bailes had the advantage going into Turn 3 until Strickler – “The High Side Tickler” – kept his foot in the throttle and powered his way around the outside of Bailes and cleared him for the lead before the exit of Turn 4. In the same lap, Bloomquist went from fourth to third and began his march to the leaders.

Throughout the 40 laps, Strickler, Bailes and Bloomquist looked as though they were connected by rubber bands. One would pull away and then the other would close back in. When Bailes was close enough to Strickler, he’d attempt a slide job into Turn 1. And when Bloomquist was close enough to Bailes, he would do the same. However, the top side prevailed every time, allowing Strickler and Bailes to drive away from their challenger with a head of steam down the backstretch.

While they argued over the top three spots throughout the majority of the Feature, Canada’s Ricky Weiss was quietly maneuvering his way up through the field for the second race in a row. During the season-opening race on Thursday, Weiss went from 23rd to seventh in his self-build Sniper Chassis. He wrecked that car Friday night before the rain came and had to use his old Team Zero chassis for Saturday’s event. There was no speed lost as Weiss went from 15th to fourth by lap 29.

On a late restart with six laps to go, due to a caution – the fourth of the night – for rookie Ryan Gustin slowing with an issue, Strickler, Bailes, Bloomquist and Weiss were brought nose to tail for the final time of the night. When the green flag hit the crisp air for the restart, Strickler launched ahead of the field and was followed by Bloomquist, who got by Bailes for second.

Bailes and Wiess faded on the restart, however, Weiss made his way back to fourth while Bailes struggled and had to settle for a 12th-place finish.

The main battle was down to Strickler and Bloomquist. Only Strickler didn’t know that until five laps to go. Upon his entrance into Turn 1, he spotted the last car he wanted to see creeping alongside him.

His tactics were enough to keep Bloomquist from claiming his sixth Series win at Volusia, leaving the former champion to ponder what he could have done differently.

Despite having to settle for second-place, Bloomquist was encouraged by the speed his new car showed and said he’s excited to return to Volusia for the Feb. 10-13 50th DIRTcar Nationals.

Three-time champion Darrell Lanigan rebounded from his mistake during the season-opener, which left him with a 16th-place finish, by rounding out the podium Saturday night with a third-place finish.

Weiss earned the hard charger award for the second race in a row and is currently the highest full-time World of Outlaws driver in points – currently sitting third. Three-time defending champion Brandon Sheppard is 10 points behind him in fourth after finishing seventh. That finish ends Sheppard’s streak of not finishing worse than fourth in the second race of the year in his last four seasons.

Strickler is the current points leader but has a part-time schedule planned with the Series this year. He’s won at Volusia eight times prior in a Modified but winning with the World of Outlaws holds a special meaning as he turns his attention more toward Late Model racing in 2021.

“We’ve, obviously, won all over the country with the Modifieds, but trying to do this full-time now and Late Model racing is exploding right now, and to be able to run these tours and win these big races is huge for me and our team,” Strickler said. “This (Longhorn chassis) car is owned by myself and a lot of great sponsors that have been with me forever. It’s awesome to bring this car out and get a win with it.”