Tickets On Sale For Illini 100 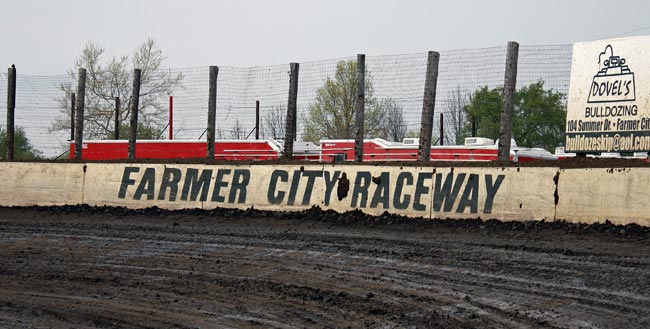 FARMER CITY, IL – March 1, 2013 – The buildup to the fifth running of the World of Outlaws Late Model Series ‘Illini 100’ on April 5-6 at Farmer City Raceway has begun with the announcement that tickets are now on sale.

Reserved seat weekend ticket packages – as well as a limited number of reserved trackside parking spots – for the $20,000-to-win WoO LMS spectacular became available for purchase this morning. Demand among fans is once again expected to be high for Illini 100 weekend, which has quickly developed into one of the country’s most anticipated dirt Late Model events.

Fans can make their Illini 100 ticket purchases on-line at www.worldofoutlaws.com/tickets or by calling the event hotline at 877-395-8606.

The 2013 Illini 100 at the high-banked, quarter-mile Farmer City oval will feature the event’s customary WoO LMS format, with Ohlins Shocks Time Trials and heat races on Fri., April 5, and B-Mains and the 100-lap headliner on Sat., April 6. The UMP Modified division will also play a big part in the weekend activities, running heat races on Friday evening and then returning on Saturday to run B-Mains and an extra-distance 50-lap A-Main paying a whopping $5,000 to win.

“There’s no 100-lap dirt Late Model race in the country quite like the Illini 100 at Farmer City Raceway,” said WoO LMS director Tim Christman. “One-hundred laps of big-time World of Outlaws Late Model Series racing at a fast, quarter-mile bullring with a historic atmosphere makes the Illini 100 one-of-a-kind – and it’s the reason fans and racers from all over the Midwest flock to Farmer City for what has become a springtime tradition.”

Former WoO LMS champion Billy Moyer of Batesville, Ark., is the only two-time winner of the Illini 100 – and both his victories came in dramatic fashion. He beat Shannon Babb of Moweaqua, Ill., to the finish line in down-to-the-wire thrillers in 2008 and 2010.

WoO LMS regular Shane Clanton of Fayetteville, Ga., won the 2009 edition of the Illini 100 after pulling off a late-race pass of Muscatine, Iowa’s Brian Birkhofer to reach Victory Lane, and last year Jimmy Mars of Menomonie, Wis., held off eventual WoO LMS champion Darrell Lanigan of Union, Ky., to triumph by just 0.308 of a second in front of a standing-room-only crowd.

This year’s Illini 100 weekend will also include racing for Farmer City’s weekly support classes. The DIRTcar UMP Street Stocks and Hornets will run complete programs on Fri., April 5, and the Street Stocks will return on Sat., April 6, to battle in another regular racing card.

Hot laps are scheduled to start at 6:30 p.m. on Friday and 5 p.m. on Saturday, with qualifying to immediately follow.

Advance-sale reserved seat ticket packages for both nights of Illini 100 competition cost $40 for adults and $20 for children 12-and-under. On-line and phone ticket sales for reserved seat weekend ticket packages will conclude at 5 p.m. ET on Wed., April 3, and then all remaining tickets will be general admission.

An open practice session will be held on Thursday evening, April 4, beginning at 6 o’clock. Pit passes will be $25 for the practice night, but Thursday’s pit admission can be included in an $85 three-day band ($5 discount for DIRTcar UMP members).

A total of 39 reserved drive-in parking spots along the fence ringing turns one and two are also available for purchase. The 16-foot spots cost $75 each and will be numbered 1-39. Spectators can reserve a spot on-line at www.worldofoutlaws.com/tickets or by calling 877-395-8606.