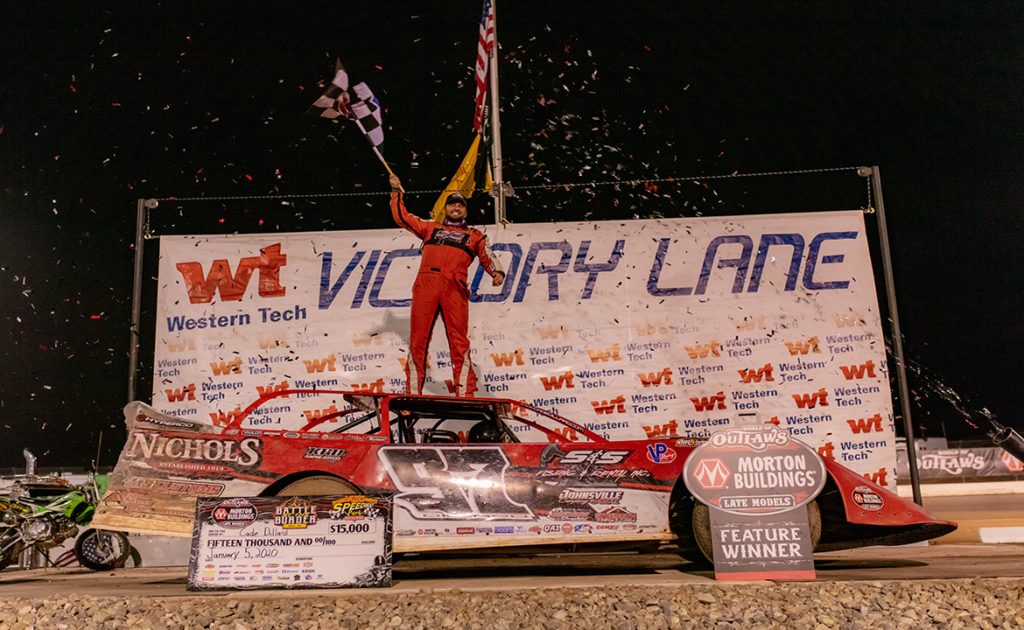 VADO, NM – He’s known as Thriller, and on Sunday night at Vado Speedway Park in the World of Outlaws Morton Buildings Late Model Series inaugural Battle at the Border finale, Robeline, LA’s Cade Dillard lived up to his nickname and then some.

With two-time and defending Series champion Brandon Sheppard setting the pace, Dillard battled side-by-side with three-time Series champion Darrell Lanigan on almost every inch of the 3/8-mile dirt track, then slowly pulled away from Lanigan and closed the gap on Sheppard as the laps began winding down.

After a caution waved with just nine circuits remaining, a single-file restart was Dillard’s last chance. Sheppard, having driven such a versatile car all night, chose to ride the cushion around Turn 4 on the restart while Dillard turned his MB Customs chassis #97 down off the fourth corner. With the bite on the low side, Dillard blasted by Sheppard into the lead at the flagstand – one he would not relinquish, as he turned on the jets and flat-out ran away from his competition to score the first World of Outlaws victory of his young career.

Overcome with emotion in Victory Lane, Series Announcer Rick Eshelman welcomed Dillard into the World of Outlaws winner’s club, the 87th driver in tour history to join it, but all the 28-year-old could muster in response was, “I’m speechless.”

After celebrating with his crew and embracing the other drivers in Victory Lane, Dillard had some time to let it soak in, and described the feeling of a national tour victory by reflecting back on the heroes of the Series he once looked up to. Now, he stands alongside them.

“I’ve watched these guys for a long time, back when I was Modified racing, and dreamed of the day of getting to race with them. Never in a million years did I think something like this would ever happen for me,” he said.

Dillard stayed consistent the entire race, never dropping out of the top five in the 75 laps contested. But from the initial drop of the green, it appeared as though Sheppard was going to have his way with the field.

The Rocket-Shepp jumped out to the lead and held it through several restarts, including one after an extended red-flag period for a three-car accident in Turn 1. Bobby Pierce was one collected in the incident that went over onto his side, made the repairs and came back out to finish all 75 laps in tenth.

As Sheppard continued to show the way and the laps clicked off, Dillard’s battle with Lanigan heated up. The Bluegrass Bandit regained the runner-up spot on lap 30 as Dillard faded back a bit, giving up third to Scott Bloomquist seven laps later. Dillard rebounded on the next lap and got it back, just a few laps before another caution flew that placed him on the rear bumper of Lanigan.

“I should’ve picked the outside on that restart, I let Dillard have it,” Lanigan said. “I thought I could get some more grip on the bottom; the top was giving up some.”

Scrubbing the outside wall on the restart, Dillard took the momentum line up top and it paid off as he zoomed by the #29v to regain second. Dillard completely reeled-in Sheppard by lap 60 and quickly put his wheelman skills on display, going slidejob-for-slidejob with the leader around the wicked fast oval and bringing the fans to the edge of their seats. Then came the final restart on lap 67, where he made the move that won him $15,000.

“I didn’t think he would mess-up up there and I would even have a chance to get around him, honestly,” Dillard said. “He’s so good at running the cushion. If it hadn’t been for that restart… I just had my tires cooled off, and I felt like I fired really good.”

From that point, Dillard put his car on the wall all the way to the checkered flag, holding off Sheppard, Lanigan, the legend Scott Bloomquist, and Friday’s winner Ricky Weiss, who started 21st.

From Sheppard’s perspective, he said if he could’ve had the restart back, he knows exactly what he would have done.

“I would have just turned down and came off the bottom of [turn] four, like I did every other restart,” Sheppard said. “It kept getting slicker and slicker through the middle, so I didn’t want to kill my speed turning down across the track. But obviously I thought wrong on that because I needed to turn down, and I didn’t. I gave it away.”

Win or lose, the respect the Outlaws have for each other off the track shines through in the end. Dillard and Sheppard are two of the youngest non-rookie competitors on the tour, and they always go the extra mile to show their sportsmanship.

“Cade’s been doing a really great job,” Sheppard said. “He always drives us clean and we always do the same for him. He’s a good guy and deserves to win. But I feel like we’ve had the car to win all weekend, we just haven’t got it done.”

Lanigan and the new Barry Wright Race Cars / Viper Motorsports pairing had a solid first weekend out in New Mexico, with two top-five finishes to cap off the Southwest stretch. Despite the potential he felt had there been no final caution, his veteran intellect knows there’s always room for improvement as the season moves forward.

“If there wouldn’t have been that caution… we were on Sheppard pretty hard,” Lanigan said. “We’ve got something to learn, but the car seems to be pretty good.”

Somehow, after winning a record 18 World of Outlaws races last year, Sheppard has now gone 11 complete races without a tour victory. He did, however, finish second in all three races this weekend, and takes the points lead into an event he absolutely dominated last year – Volusia Speedway Park’s DIRTcar Nationals. Make no mistake, Rocket1 Racing will be prepared to defend their Big Gator title at Florida in February.

“To come off Volusia with four straight wins and to be going back into there now is really exciting for me,” Sheppard said. “My guys worked really hard all winter to give me a great racecar, and everything’s just clicking right along like it did last year. So, things are looking up.”

Four straight nights of World of Outlaws Morton Buildings Late Model Series action commences on Feb. 12 at Volusia Speedway Park for the 49th annual DIRTcar Nationals presented by Bozard Ford. Don’t miss a moment of the moment of the action from Barberville, FL, as the Outlaws take on The World’s Fastest Half-Mile – get yourself a DIRTVision Fast Pass subscription today and catch every lap live!