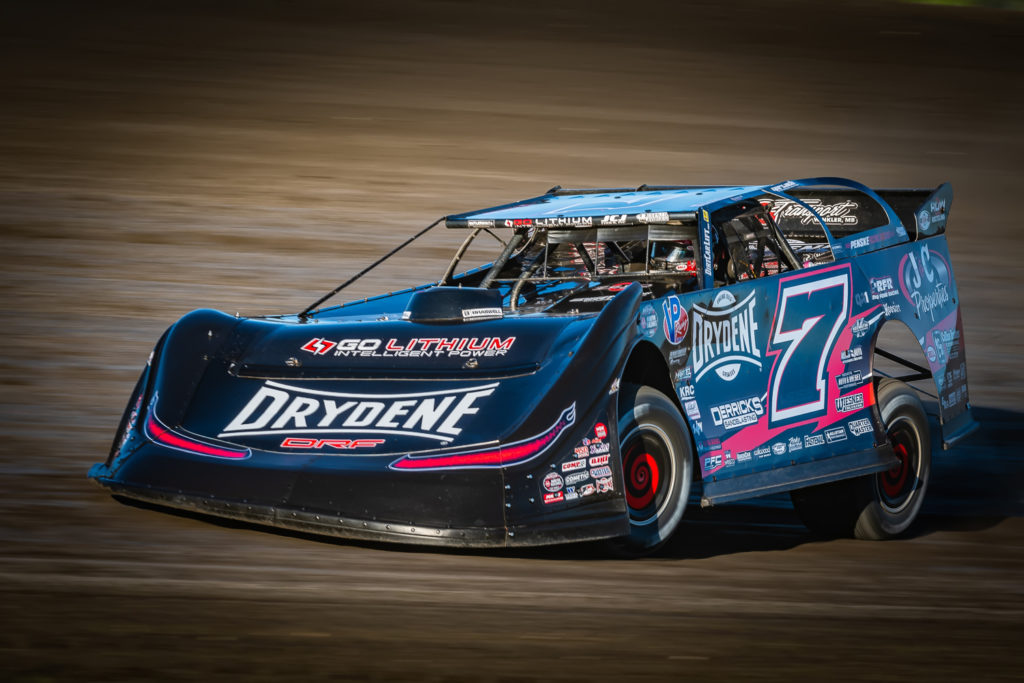 If statistical trends mean anything, 2021 will be the year of Ricky Weiss.

Today, the Headingly, Manitoba, Canada native confirmed that he’ll return to the World of Outlaws Morton Buildings Late Model Series in 2021 with his sights set on the $100,000 championship. After earning Racing Electronics Rookie of the Year honors with a third-place finish in 2019, then a runner-up result in 2020, all that remains for The Manitoba Missile is the prestigious title.

Continuing his relationship with Drydene Performance Products, Weiss is proudly bringing them back as the primary sponsor on his No. 7 for the second year now. He’ll keep Vic Hill power under the hood, but is making some changes elsewhere in his program.

Building his own chassis, Weiss has split with his Team Zero Race Cars over the off-season to build his own machines in 2021; a new adventure that he hopes will instill some new life in his budding operation.

“I feel more confident than ever going into this next year with our whole team,” Weiss said. “If you look back at where we started with the Outlaws in 2019 to where we are now, we’ve grown leaps and bounds. We were the top rookie, then we won some races, now I really want to go contend for a title with Brandon [Sheppard]. I’m proud to have Drydene back on board with us and ready to get the season rolling next month.”

With more than 55+ races on a massive 2021 slate spanning from January to November and Florida to North Dakota, a championship against The Most Powerful Late Models on the Planet will be no easy task. To earn the crown and write his name into the record books, Weiss will have to dethrone the modern-day king of the Outlaws: Brandon Sheppard, who enters a new year fresh off his third World of Outlaws title with Rocket1 Racing.

Since joining the World of Outlaws Morton Buildings Late Model Series on a full-time basis in 2019, Weiss has certainly ascended up the ladder in his tenure. Why not climb just one position more?

He went winless in year one, but came close to victory on countless occasions. Leading 82 laps across several different races, Weiss was slowly grooming himself into the title contender he would soon become. Backed by the consistency of 17 top five finishes and 30 top ten efforts in 41 shows, a third-place championship result gave him Rookie of the Year honors over Cade Dillard and propelled him into an even more successful sophomore season.

Led by his first career victories at Vado (N.M.) Speedway Park in January and Jackson (Minn.) Motorplex in May, Weiss recorded a career year in 2020 which saw him place second in the point standings. He set career highs in every statistical category with 150 laps led, 19 top five finishes and 31 top ten results. Solidifying that he was not only here to stay, but here to become a championship contender.

“Switching to our own cars is going to be a new challenge, but it’s something we’re ready for,” noted Weiss on the change. “To have our own resources and be able to make all of the adjustments that we can think of or desire will be good for us. We’ve been tinkering with a lot of things in the shop this off-season and doing a lot of fine tuning on this deal. I’m excited to get to Volusia next month and really start working on this thing at the track.”

His hopeful championship campaign will kick off in just over a month when the 2021 World of Outlaws Morton Buildings Late Model Series season begins at Volusia (Fla.) Speedway Park for the Sunshine Nationals on January 14-16. Four additional nights at Volusia will follow three weeks later when the 50th annual DIRTcar Nationals takes center stage on February 10-13. If you can’t be there, you can watch Every Lap LIVE on DIRTVision.

Single-day tickets and packages are now available to purchase to both events for fans. You can buy Sunshine Nationals and DIRTcar Nationals TICKETS RIGHT HERE.