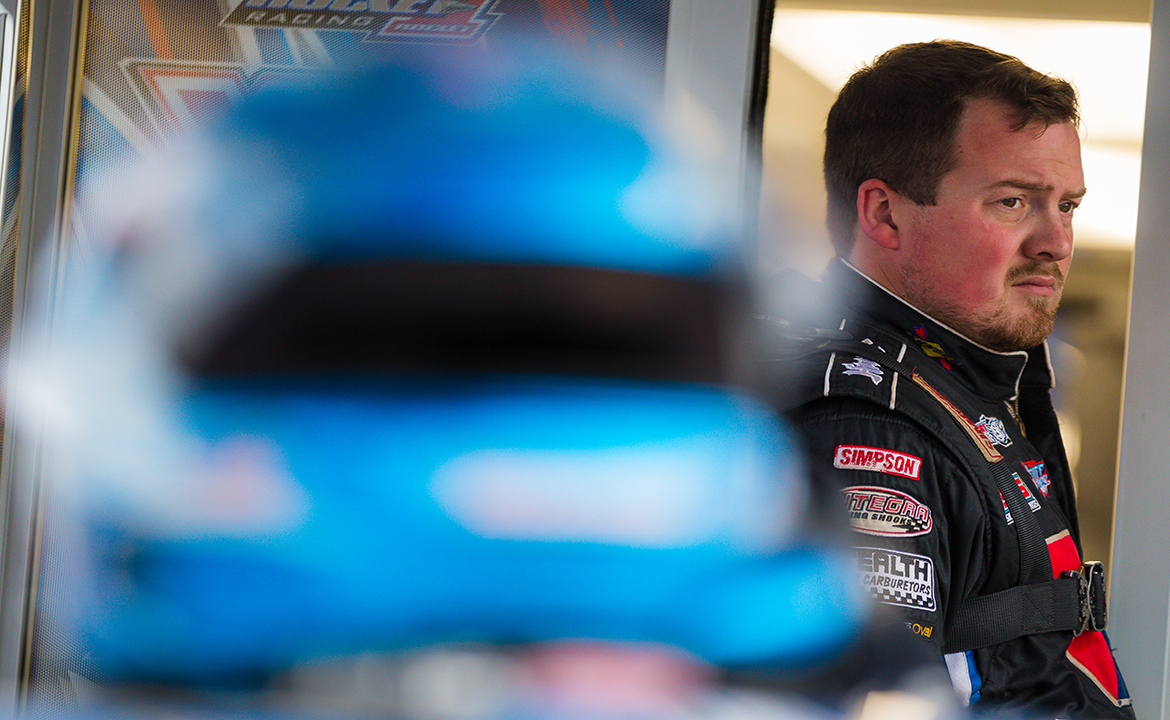 CONCORD, NC – The 2019 World of Outlaws Morton Buildings Late Model Series season finale at The Dirt Track at Charlotte kicked off on Thursday with 69 of “The Most Powerful Late Models on the Planet” stacking the pit area for the Can-Am World Finals.

Joined by the World of Outlaws NOS Energy Drink Sprint Car Series and the Super DIRTcar Series, each getting set to cap off their tight points battles this weekend, the Late Models took to the track for Hot Laps on a lightning-fast racing surface before two Qualifying sessions to determine Friday and Saturday night’s Drydene Heat race lineups.

Unfortunately, Mother Nature had plans of her own during the final Qualifying session for Saturday’s Heat lineups, showering the track after 23 cars took time in Group A.

However, in anticipation of inclement weather, the event’s Qualifying format had been previously modified earlier in the day to count the first lap of the first Qualifying session for Friday’s Heat races and the second lap for Saturday’s Heat races, in case weather became an issue.

When it did, Saturday’s Qualifying session was halted and scratched from the program, concluding Thursday night’s on-track action. From the results below, both Friday and Saturday’s Heat race lineups have been set.

Brandon Sheppard has officially clinched the 2019 World of Outlaws Morton Buildings Late Model Series Championship, but he is still looking for the record-breaking 19th win of the season. Qualifying 10th overall on his first lap and eighth on his second lap in Group A, Sheppard will roll off fourth in Heat One on Friday and third in Heat two on Saturday.

Ironically, the man who he shares the single-season wins record with — Josh Richards, who set the record in the same #1 Rocket house car that Sheppard now pilots — clocked in the fastest overall on both of his Qualifying laps and will go from the pole of Heat One on both Friday and Saturday. With only three cars transferring to the Morton Buildings Feature from each Heat race on both nights, Sheppard shouldn’t have any issues punching his ticket into a good starting spot for the Features, but if he really wants to make a statement, he’ll have to knock the “Rocket Man” off the top spot to get into the redraw. Only the winners will redraw for Feature spots on both nights.

Meanwhile, the battle for second through fifth in the points standings still lives and will no-doubt come to the forefront of the storylines by the weekend’s conclusion. 2015 Series Champion Shane Clanton sits in the best position out of his nearby competition in the standings, as he’ll go from the pole of Heat Race 6 on Saturday and from the outside pole of Heat Race 5 on Friday.

Ricky Weiss and Darrell Lanigan each have mid-pack starting spots in Heat 3 on both days, and Chase Junghans has the most work to do out of everyone. A 22nd-place effort in Group A’s first lap and a 25th-place time on his second lap puts the current points runner-up eighth in Heat Race 1 on Friday’s starting grid and ninth in the same Heat on Saturday. Watch as the CJR team tries to rebound and protect his slim points advantage over the other three this weekend; he’ll have his work cut out for him.

The Can-Am World Finals action resumes Friday, Nov. 8, at The Dirt Track with Super DIRTcar Series Heat races hitting the track at 4 p.m. Late Model Heats, redraw, Last Chance Showdowns and the 50-lap Morton Buildings Feature will all be part of the program, live on DIRTVision!