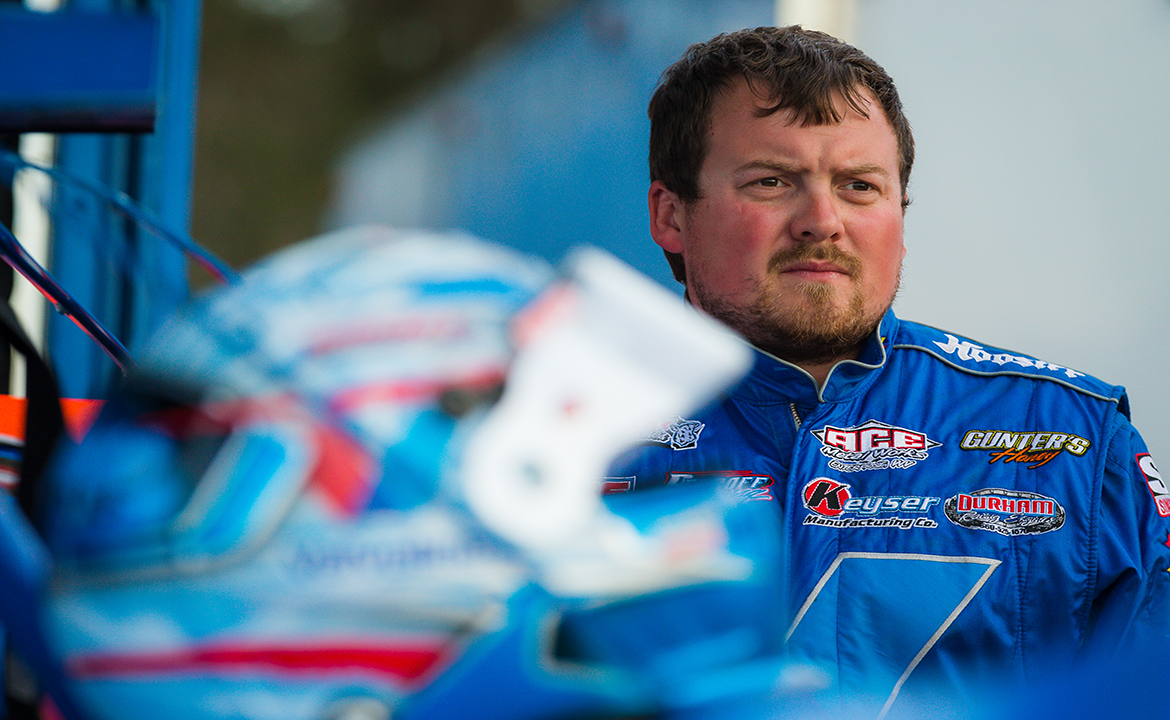 Last year, 27-year-old Brandon Sheppard and the Rocket1 Racing team put together one of the most dominant seasons in Dirt Late Model racing history.

This Friday, he will join a roundtable of guests in watching DIRTVision’s presentation of the 2019 Prairie Dirt Classic at Fairbury Speedway – a race nobody will soon forget, where Sheppard beat fellow Illinoisan Bobby Pierce to the line in a dramatic finish to win his second career PDC title. Tune in Friday at 9 p.m. ET to relive the 100-lap thriller.

For Sheppard’s efforts, a second World of Outlaws championship ring added to his merit collection and the sixth overall for team/car owner Mark Richards.

These stats are impressive, as are The Rocket-Shepp’s driving abilities aboard one of the most popular Late Model chassis known to the sport. But he didn’t get this way overnight… What did his path to the ultimate dirt track racing glory look like?

In 2007, the Sheppard family added Brandon into the racing mix by buying him an open-wheel Modified – a car style common to many weekly racers in the Midwestern United States. At just 14 years old, Brandon climbed behind the wheel and took the first step in what would soon become an illustrious career as a dirt track racer.

He raced the Modified weekly for a few months before jumping into his father’s backup Late Model one night at Macon Speedway in Macon, IL, and that’s all it took for him to drop the Modified and embark on a Late Model career.

Later that year, he won the first Late Model race of his career at Lincoln Speedway in Lincoln, IL, and took another checkered flag at Macon before the year was out. For many young wheelmen, it takes several months or even years before their first trip to Victory Lane. But there was 14-year-old Brandon Sheppard, with two victories under his belt going into his second year behind the wheel, already displaying his raw talent and drive to compete with the best in the sport.

In 2008, Sheppard took on his first regional tour around the Midwestern U.S. as a regular on the now-defunct Northern Allstar Late Model Series and was named Rookie of the Year. The next two seasons, he continued gaining experience around the local Illinois bullrings, winning shows here-and-there before setting out in 2011 for the most decorated season of his career up to that point.

The 2011 season marked the New Berlin, IL-native’s first two DIRTcar Summer Nationals victories – one at Lincoln Speedway on July 3 and another at Farmer City Raceway just five days later. A strong season as a regular on the Northern Allstars tour earned him his first-ever championship.

A trip to the World of Outlaws’ prestigious USA Nationals event at Cedar Lake Speedway in Wisconsin introduced Sheppard to a man and a team that would soon give him the biggest break of his young career – Mark Richards of Rocket1 Racing.

Sheppard and the defending World of Outlaws champion, Mark’s son Josh, lined up in the same heat race together, in which Sheppard came from deep on the grid to finish second to Richards. The father and son personally congratulated Sheppard on his great showing and went about the rest of their season without connecting again until later that fall.

“Later that year, Michael Rigsby from DirtonDirt.com told me at the track one day, ‘Josh is getting ready to go do some NASCAR stuff and Mark’s got a short list of drivers that he’s thinking about putting in his car, and you’re on that list.’ And I thought, ‘oh wow, that’s awesome, but no way a young boy from New Berlin’s gonna get that ride,’” Sheppard said.

For the 2012 season, Josh left the full-time World of Outlaws roster to pursue ventures in NASCAR. Sheppard had been in talks with Mark about purchasing a Rocket Chassis of his own, and Mark did him one better just a short time after Florida/Georgia Speedweeks that February.

“When I turned 18, my dad told me I had two years to make something happen,” Sheppard said. “Well, the winter that I was about to turn 20, Mark Richards called me and was like ‘wanna come drive this car?’ And I thought, ‘heck yeah, that’s a no-brainer.’”

“I needed somebody that was young and kinda fit the mold that Josh had been,” Richards said. “[Sheppard] would come to tracks that we would be at and we would get a chance to watch him. Finally, I asked him if he’d be interested.”

The new owner-driver pairing set out on the road that year with a schedule centered around the DIRTcar Summer Nationals tour and a few national touring races where possible. That September, Sheppard got his first career World of Outlaws win at Belle-Clair Speedway in Belleville, IL, at just 19 years of age.

Josh Richards resumed his duties in the Rocket Chassis house car for 2013 as Sheppard returned to his family-owned #B5 and cleaned house, winning both his first DIRTcar Summer Nationals championship and DIRTcar national Late Model points titles. Sheppard scored a one-off start in the seat of Rocket1 that September, becoming the youngest winner of the prestigious Dirt Track World Championship, worth $50,000.

Josh became sidelined with medical issues early in 2014, and Sheppard was once again called on to drive Rocket1 through Speedweeks. Personal matters came about for Sheppard after the early start, forcing him out of the ride and back into his B5 for local action and the Summer Nationals tour, where he finished fourth in overall points.

2015 and 2016 brought Sheppard the opportunity to race his B5 nationally for the first time, where he enjoyed a great deal of success across several different tours. Joining Ohio-based Best Performance Motorsports for the 2016 season, he won his second Dirt Track World Championship title at Portsmouth Raceway Park in what would be his final full-time season aboard the familiar B5 car.

At the end of 2016, a shockwave was sent through the Dirt Late Model world when Josh Richards announced his plans to vacate his father’s Rocket1 Racing team and join Best Performance. With the Rocket1 seat now open, Mark Richards once again turned to that one young gun from Illinois that always came through when it mattered most.

“When Josh decided to leave the team in 2016, there was only one person that I felt was the fit for us at the time. We called Brandon and he decided to take the offer, and he’s been here since,” Richards said.

The team set out on the road for the 2017 World of Outlaws tour together and made history, tying Josh’s Feature win record of 18 from the season prior and garnering their first Outlaws championship together.

2018 was another great year for Sheppard and the Rocket1 crew, notching 13 World of Outlaws Feature wins. And although they fell just shy of another championship, the dominance they displayed the following season made things well again for the Shinnston, WV-based team, as they regained their rightful place atop the Dirt Late Model world with a second championship in 2019.

And for all they’ve accomplished together, Sheppard attributes a great part of his long-term success to Richards’ driving tutelage and brilliance at the head of the team.

“He’s always kinda kept me under his wing, kept me going and taught me what I needed to be taught,” Sheppard said. “Told me when I was doing stuff wrong and what I needed to do better. He’s made me a better driver, for sure.”

It’s been an incredible career so far for Sheppard, and the sky is the limit at just 27 years old. Who knows how much higher he’ll set the bar in the future?