THE BAND IS BACK: Dennis Erb Jr. Gets First World of Outlaws Win of 2020 at Eriez 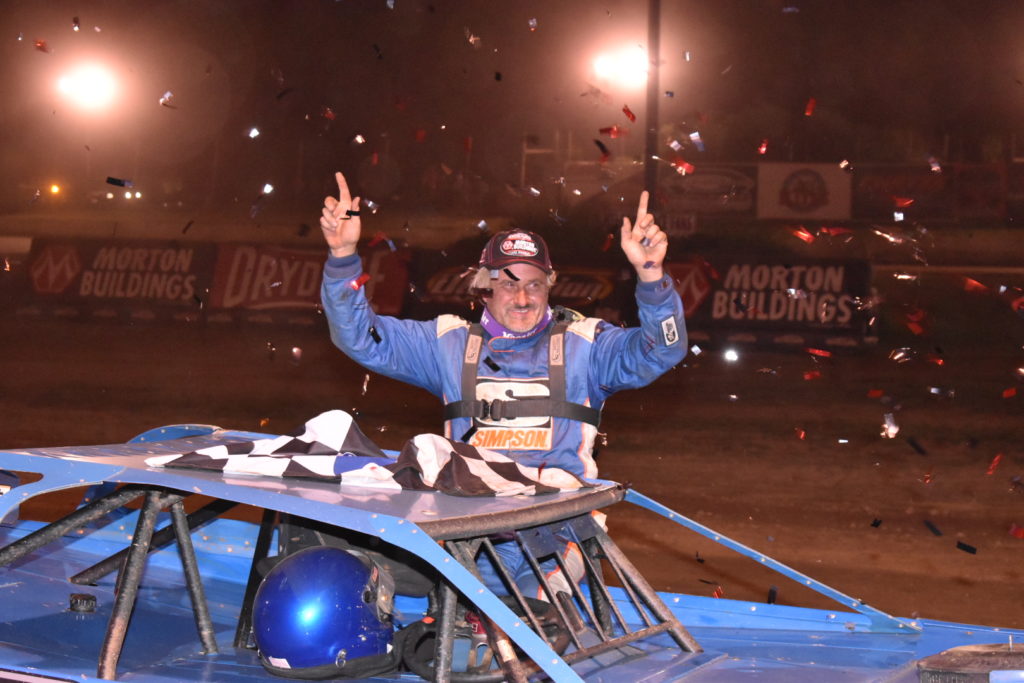 For the first time since November 4, 2017, Dennis Erb Jr. of Carpentersville, Ill. is once again a World of Outlaws Morton Buildings Late Model Series winner.

After surviving a seemingly never-ending war with Brandon Sheppard for the second spot, “The One Man Band” found a whole new gear in his Rocket Chassis No. 28 over the final stages of Saturday’s 50-lapper at Eriez Speedway. Catching local favorite and race-long leader, Boom Briggs of nearby Bear Lake, Pa., Erb capitalized on Boom’s lap 41 mistake to assume command of the race lead and then drove off into the Eria, Pa. night with a dominating 3.081-second victory.

The sixth-career World of Outlaws triumph for Dennis Erb Jr. and his lone crew member, Heather Lyne, makes them one-for-one in Eriez Speedway competition with a win in their debut at the 3/8th-mile track. Snapping an 82-race winless drought, it’s Erb’s first win of the season and his first with the series since November 4, 2017 at The Dirt Track at Charlotte.

“The longer that race was going, the better I was,” noted Erb on his progress. “I had a harder tire than those guys, so the car kept steering better and better, and I could charge the corner harder. He was loose and left the lane open there, so I had to capitalize on it. All three of us had a really great race together. This is my first time here and they gave us a good race track. Looking forward to the next time.’

Starting the show with his 36th career World of Outlaws Fast Time Award, Brandon Sheppard was the top gun in qualifying at 15.998 seconds, but the early highlight of the night came when local heroes and nearby Bear Lake, Pa. relatives Chub Frank and Boom Briggs went 1-2 in the second group of qualifying. The stout foursome of Sheppard, Erb, Frank and Briggs kept it rolling with Team Drydene heat race wins leading them to the Morton Buildings redraw.

Taking the pole position, Erb had the catbird seat for the start of the 50-lapper, but it was Boom jumping to the early lead from his outside. A series of cautions just shy of the midway point created repeated restarts with drivers front-to-back struggling to find consistency or momentum with several stoppages.

Getting a longer run through the second half, Dennis Erb Jr. emerged from a three-way war with himself, Brandon Sheppard and Boom Briggs to take the lead in the closing laps. Capitalizing on Boom’s slip off turn four on the 41st circuit, Erb pulled underneath, alongside, and then drove by to beat him to the line for the top spot.

From there, the Carpentersville, Ill. native drove away to a dominant 3.081-second victory at the checkered flag.

Following Erb to the stripe was Boom Briggs with a second-place finish, matching his career-best performance with the World of Outlaws Morton Buildings Late Model Series. It wasn’t that elusive first-career win on home turf he and the fans wanted so badly, but it was a stellar ending to a rollercoaster weekend for the Bear Lake, Pa. native son.

“At 9:00am this morning, there wasn’t even a rear clip on this car, so hats off to my amazing crew,” Briggs said on his whirlwind weekend. “I got my lear rear too cold there at the end and Dennis had the harder right front on. I just couldn’t steer that good and I got too tight after the last caution. When I saw Dennis underneath me, I couldn’t turn down across his nose, he’s raced me clean all year long, so I had to do the same. Hats off to Heather and him, I actually got him to smile now.”

Rounding out the podium was Brandon Sheppard of New Berlin, Ill. in third, who extended his championship points lead following a weekend swing with wins at Lincoln and Williams Grove along with his third-place at Eriez. 20-year old Ashton Winger continued his excellent Rookie of the Year campaign with Hard Charger honors for his 15th-to-fourth run aboard the Rocket Chassis No. 12. Closing out the top five was “A-Train” Alex Ferree of Saxonburg, Pa., who picked up his first World of Outlaws top five finish since August of 2006 at Lernerville Speedway.

A trio of full-time Outlaws charged from mid-pack to earn top ten finishes with Cade Dillard of Robeline, La. guiding the MB Customs No. 97 from 12th-to-sixth; Chase Junghans of Manhattan, Kans. piloting the Shop Quik, Rocket No. 18 from 16th-to-seventh; and Ricky Weiss of Headingley, Man. driving the Drydene Performance Products No. 7 from 18th-to-eighth. A pair of Pennsylvanian’s concluded the top ten with Chub Frank of Bear Lake finishing ninth and David Scott of Garland coming home tenth.

The World of Outlaws Morton Buildings Late Model Series will take next weekend off before resuming the run to World Finals with a September doubleheader. It all starts on Friday, September 4 with the series’ fourth appearance at Lavonia (Ga.) Speedway, followed by a Saturday, September 5 stop at Lancaster (S.C.) Motor Speedway for the second time in series history.