Thanks for the Memories Chub Frank 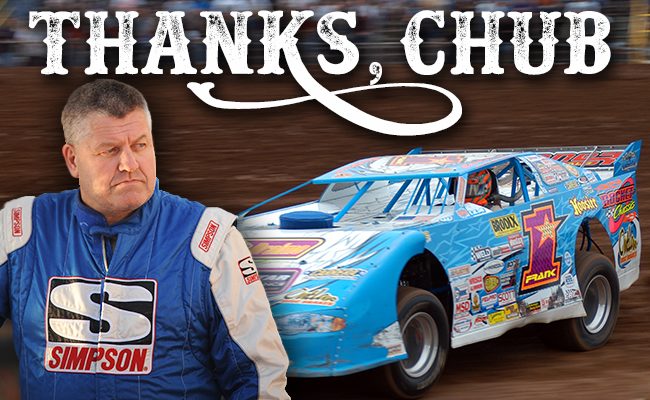 CONCORD, NC – May 8, 2018– After more than 14 consecutive seasons together, Chub Frank has officially retired from competition with the World of Outlaws Craftsman® Late Model Series. Frank has entered every World of Outlaws event since the Series rekindled in 2004 (except for two races due to an injury).

Over the years, Frank has collected 16 World of Outlaws wins, with his first win being on April 23, 2004 in his home state of Pennsylvania at Lernerville Speedway, and his last win being at K-C Raceway (now Atomic Speedway) in Ohio on August 22, 2009. Frank currently sits 10th on the World of Outlaws Craftsman Late Model Series All-Time Wins list.

Frank was not only a decorated Late Model driver, but also a great friend to many who travel with the tour.

“The biggest thing is that I consider Chub more of a friend than anything,” said World of Outlaws Safety Director Tyler Bachman. “He’s the kind of guy you could always go to, no matter if it was something at the race track or personal. At the end of the race you could go to his trailer and have a beer with him and a good conversation. He was a hell of a racer, but he was always a great friend.”

Bachman has been with the World of Outlaws Craftsman Late Model Series since 2011. He started as a pit-steward, which has evolved over the years to his current position of Safety Director.

“When I first started this job, he started yelling at me about something at the track and I didn’t know how to take it at first,” continued Bachman. “It was one of my first races I was ever at with the Series, and it’s one of the things he’s always told me over the years, ‘I’m not yelling at you. I’m yelling at your shirt’. Not just him, but any driver. They’re not yelling at you as a person; it’s just the shirt. You travel with these guys up and down the road, they’re like family to you, so we don’t get excited about penalizing someone. It’s one thing that comes with the job. Chub is just all around awesome. He’s a good buddy and friend to have.”

Frank started racing street stocks back in 1978 before moving up the racing ladder to eventually sit behind the wheel of a Late Model. After that, he never looked back. Frank developed into a dominant Late Model driver around his hometown, winning the Stateline and Eriez Circuit Limited Late Model titles from 1983-1987 and capturing the Stateline Super Late Model Championship in 1989 and 1990. The driver of Bear Lake, PA was inducted into the National Dirt Late Model Hall of Fame in 2004 and now sits as one of the most decorated drivers in the industry.

“My dad and my uncle and two other guys built Stateline [Speedway] and Eriez [Speedway] back in the 50s, and they owned them until the early 80s; then they sold them,” said Frank before the Outlaws event at Eriez in 2017. “We raced there, but hell, I grew up at both tracks doing whatever— painting, garbage picking, water truck. It didn’t matter what it was; whatever maintenance needed to be done I helped out. That’s also how I ended up out on the road. The promoter at the time and I didn’t see eye-to-eye, and he told me if I didn’t like it, I could leave; and that’s exactly what I did. I raced with STARS, and then I joined the Outlaws when they first started.”

This season the Series will return to Frank’s old stomping grounds, Stateline Speedway on June 14 and Eriez Speedway on Aug. 19, although it’s not guaranteed we hope that Chub will come out to join us for one last go around.

BY THE NUMBERS: THE OUTLAWS AT I-55