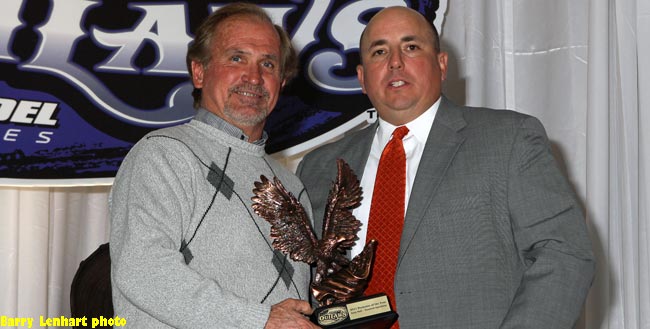 TAZEWELL, TN – April 19, 2012 – The 2011 World of Outlaws Late Model Series Promoter of the Year is ready to welcome the national tour’s stars back to his facility.

WoO LMS officials will take a moment during the $10,000-to-win event to recognize Hall’s lofty achievement in front of his home fans, but don’t expect the low-key promoter to bask in any cheers that come his way. His focus will be on ensuring the success of Tazewell’s third World of Outlaws program in as many years.

Hall, 59, is a modest sort who doesn’t promote Tazewell Speedway to earn accolades and adulation, which would explain his reaction when his name was announced as the recipient of the 2011 WoO LMS Promoter of the Year award during last November’s awards banquet in Concord, N.C.

“I was totally surprised and shocked about it,” said Hall, the first promoter of a Tennessee track to win the World of Outlaws’ top-promoter honor. “I’m not good at speeches anyway, so I was just speechless when I got up there on that stage (to accept the trophy). I didn’t know what to say.

“But believe me, I really appreciate it. To me, to get an award like that when I know how many different tracks the Outlaws go to every year, it’s an awesome honor.”

And well deserved. A former dirt Late Model driver who is entering his seventh season as owner of Tazewell Speedway, Hall was singled out by WoO LMS officials for organizing one of the 2011 season’s biggest events, the two-day, $20,000-to-win ‘Outlaw Sizzler 101’ that ran over the Independence Day weekend. The race was the richest ever contested at the track, which opened in 1965, and drew a near-capacity crowd.

Last year’s 101-lapper was a reputation-building event for Hall, who is still a relative newcomer to the racetrack promotion business. He retired from driving dirt Late Models in early 1996 – following a 19-year career that saw him enjoy most of his success at the now-closed Atomic Speedway in Oak Ridge, Tenn., where he was a track champion and won a Hav-A-Tampa/UDTRA series event in 1990 – and had no immediate desire to continue toiling in the sport in any capacity. He didn’t even attend a race until his son, Brad, began running a Late Model in 1999.

After a few years helping his son, however, Hall started getting an itch to try his hand at the helm of a track. When he learned in the mid-2000s that Tazewell – the track where he ran his first Late Model race in 1977 (but never won a feature) – was available for purchase, his interest was piqued.

“I had always thought I could do it (operate a track),” said Hall, the longtime owner of Gary Hall Motors in his hometown of Knoxville, Tenn. “But I never gave it any real serious thought until Tazewell popped up for sale. Before that I had thought about buying Atomic, but that got too expensive to buy (and) keep a racetrack.

Running a weekly dirt track has proven to be a challenging endeavor for Hall. In fact, simply preparing the Tazewell surface “takes a lot more effort than other tracks” because of the speedway’s extremely steep banking. But he’s come to enjoy “everything it takes to make a racetrack work,” no matter the stress all of it can produce.

Hall decided to test his maturation as a promoter and his track’s drawing power by scheduling last year’s ‘Outlaw Sizzler 101.’ With the Fourth of July falling on a Monday in 2011, he felt the calendar laid out perfectly for a two-day holiday-weekend special on Saturday and Sunday nights.

“I always wanted to do a big two-day show at Tazewell and last year felt like the right time to go ahead with one,” said Hall. “It was the biggest purse the racetrack ever had and we had a real good crowd. I was real happy with it and I’m glad we did it.”

Hall never intended for the extra-distance race to become an annual event, noting that the intense July heat in eastern Tennessee makes a two-day show extremely grueling for his staff, the racers and fans. He’s not ruling out running another big-money weekend spectacular in the future if the right fit materializes, but for now he thinks a single-night springtime show will provide more than enough thrills to satisfy his clientele.

“I think everything is in place for the fans to see a real good race being it’s early in the year,” said Hall, who credits his wife, Shirlene, race director/right-hand man Rick Brooks and his loyal employees for making his tenure at Tazewell so successful. “The lower temperatures and the sun going down earlier (than in July) will help make the surface a lot better. The moisture is gonna stay in the track a lot better, and that’s gonna help us give the fans a great show.”

Hall also expects a star-studded field to enter the April 28 program, including more than a dozen WoO LMS travelers and some high-profile challengers from Tennessee and other surrounding states.

Tickets for the WoO LMS event are $26, with children 10-and-under admitted free of charge. Pit passes are $38.

Pit gates open will open at 2 p.m. and grandstand gates will be unlocked at 4 p.m. On-track action is scheduled to begin at 7:30 p.m.

Tazewell Speedway is located just two miles northwest of Tazewell, Tenn. Going north on US 25-E, turn right and then left onto Bacchus Rd., travel 1.8 miles north and .8 miles west and the racetrack is located on the left.

Additional information can be obtained by logging on to www.TazewellSpeedway.net or calling 865-626-2222.

The Tazewell Speedway event will be preceded by a WoO LMS program on Fri., April 27, at North Alabama Speedway in Tuscumbia, Ala.