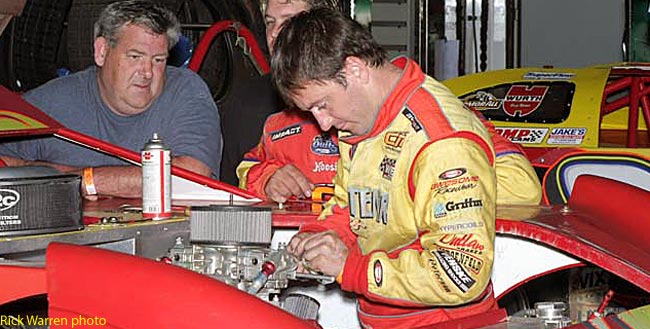 SPRING VALLEY, MN – July 11, 2011 – Tim McCreadie sure would like to duplicate the feeling he experienced last year at Deer Creek Speedway when the World of Outlaws Late Model Series returns to the Minnesota track this Wednesday night (July 13) for the 32nd annual NAPA Auto Parts ‘Gopher 50’ Charity Late Model Race.

McCreadie, of course, won the 2010 Gopher 50 at the three-eighths-mile oval. He hasn’t been victorious on the national tour since then.

It’s an uncharacteristic slump for the 37-year-old star from Watertown, N.Y., who was the WoO LMS Rookie of the Year in 2004, its winningest driver in ’05 and its champion in ’06. His winless streak on the circuit currently sits at 34 races since he nipped Darrell Lanigan of Union, Ky., by a mere 0.047 of a second in the thrilling finish to last year’s Gopher 50, a unique event co-promoted by the Blooming Prairie (Minn.) Lions Club and Deer Creek Speedway’s Queensland family to raise money for Jaycee and Lions projects.

Certainly no one who saw McCreadie celebrate at Deer Creek last year could have predicted that he would fall into a prolonged checkered-flag drought. At the time he was seemingly on top of the world, having won three times in a five-race span to pull within 16 points of the lead in the WoO LMS championship standings.

“I thought we had everything going the way we wanted it when we won at Deer Creek last year,” said McCreadie, who also celebrated his girlfriend Karen’s delivery of his first child, Gavin Chase, just two days before his Gopher 50 triumph on July 7. “We had a nice stretch where we knocked off a few wins, so at that point in time I really thought we were gonna win the whole thing (WoO LMS title).”

But as McCreadie described, “We just couldn’t carry it to the end.” He faded from championship contention over the second half of the season, ultimately settling for a third-place finish in the points standings.

Now, as the schedule brings the WoO LMS back to Deer Creek and McCreadie finds himself still searching for a winning combination, he’s reminded of his 53-week run without a victory no matter how much he’d like to avoid the fact.

“I hadn’t realized it had been that long, but what can you do?” said McCreadie, responding to an inquiry about the length of time since his last World of Outlaws score. “Looking at the past gets you nowhere. You’ve gotta go forward.

“Now, if I go two or three years without winning anything, then I guess it’ll be time to look for another profession. But I don’t think right now is any time to panic.”

McCreadie’s confidence isn’t shaken. He maintains the belief that an end to his absence from Victory Lane on the World of Outlaws trail isn’t far off.

“Our whole program has been better the last two, three weeks,” said McCreadie, who began running the Sweeteners Plus team’s ’08 Victory Circle Chassis machine in mid-May and has been steadily learning its intricacies after campaigning only Rocket cars throughout his dirt Late Model career. “People might look at the results and say, ‘He’s not running any good.’ But I know, from what we’ve done and what we’ve changed, we’re on the right track. I know for a fact that we’re better than we were before we went to Winchester and Lernerville (on June 18 and 23-25).

“I really think we’re closer than anybody knows, but that’s just me.”

Actually, McCreadie’s recent WoO LMS results seem to back up his claim. After getting off to a horrible start in 2011 – just two top-10 finishes (a fourth and a 10th) in the first seven A-Mains of the season – he’s been steady, albeit unspectacular, in the last eight events, accumulating four top-fives (including a season-high third on May 12 at Delaware International Speedway) and never placing outside the top 10. In addition, over the last eight races he’s time-trialed no worse than 13th and qualified through a heat race every night.

While McCreadie still hasn’t led a single A-Main lap this season, he’s up to third in the point standings thanks to his current string of consistency. He trails leader Rick Eckert of York, Pa., by 126 points and two-time defending WoO LMS champion Josh Richards of Shinnston, W.Va., by 86, but the season hasn’t yet reached its halfway mark so there’s plenty of time left to close the gap if McCreadie can get hot.

“I’m fortunate that because a lot of other guys have had some bad luck I’m still up in the points where it pays some good money,” said McCreadie, who did not chase the WoO LMS as a regular from 2007-2009. “Now we have to take advantage of the break we’ve gotten and go out and try to better ourselves.

“Hey, we might never run better than fifth the rest of the year, but I feel like we can do better than that. I think we’ve fixed some issues with some things on the (Victory Circle) car that I felt were holding us back and I’ve learned way more over the past month than I did in the first three, so I’m happy. I think once we find something, it’s gonna work everywhere.

“You know, you gotta get to the top-five and then the top-threes and -twos before you can win anything – you just don’t luck into a win on this deal. You’ve gotta be fast and on your game. You look at anybody who started winning again this year after struggling – they showed signs first. Take Clint Smith for example – before he won his first race this year (after a nearly three-year drought), he showed signs by being in the top five.

“I think we’re starting to show signs,” he added. “I’m not planning a parade or anything yet, but we’re on the right track.”

McCreadie could prove his intuition correct with a repeat victory in the Gopher 50, which offers a base $10,000 top prize plus a $1,000 bonus if the winner’s car carries a NAPA Auto Parts sticker. He’s certainly looking forward to competing at a speedway that he holds in high regard.

“It’s one of those tracks where usually, if you’re fast enough, nobody can hold you back,” raved McCreadie, who earned his first career win at Deer Creek in last year’s Gopher 50. “That’s the kind of track we like to line up on.

“I don’t think I’ve ever been there when it hasn’t been a great crowd and the racing isn’t really good. Last year Darrell (Lanigan) and I had a great race that went right down to the finish and I wouldn’t expect anything less this year.

“It’s a great track, it has a great atmosphere and they (the promoters) treat you good, so it’s a place we love to go to,” concluded the winner of 16 career WoO LMS A-Mains. “I just hope we can pay them back with some good racing again.”

McCreadie is one of many high-profile drivers to win the NAPA Auto Parts Gopher 50, which was contested at Chateau Speedway in Austin, Minn. (1980-1981) and the Steele County Fairgrounds in Owatanna, Minn. (1982-2004) before settling in at Deer Creek in 2005. The race, which has been overseen since its inception by Blooming Prairie Lions Club member Jerry Ingvalson and has raised over $300,000 for Jaycee and Lions projects, will be part of the WoO LMS for the seventh consecutive year.

A special price of $25 on pre-sale tickets for fans ages 13-and-over remains available until 5 p.m. CT on July 11 through www.deercreekspeedway.com or by calling 1-877-DCS-RACE. On race day tickets are $30 and $15 for kids 12-and-under. Reserved seats are available.

An added attraction for fans attending the Gopher 50 will be an appearance by ARCA Racing Series star Steve Arpin, a native of Fort Frances, Ont., who has his racing roots in Deer Creek’s open-wheel Modified class. The Mike’s Hard Lemonade Chevrolet Silverado No. 32 that Arpin is driving in selected NASCAR Camping World Truck Series events this season will be on display and Arpin will both sign autographs for fans and climb into the cockpit at the speedway; he is scheduled to drive a Tom Paulson-owned car in the evening’s supporting $2,000-to-win United States Modified Touring Series (USMTS) program.

Additional info on the Gopher 50 can be obtained by logging on to www.deercreekspeedway.com or calling 1-877-DCS-RACE.