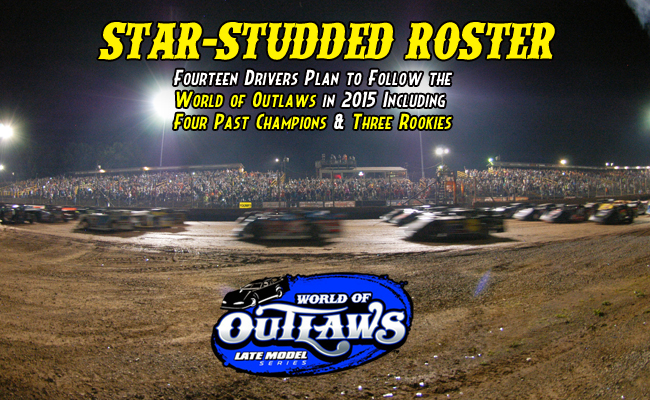 CONCORD, N.C. – Feb. 1, 2015 – The World of Outlaws Late Model Series is set to launch its 12th season under the World Racing Group banner and once again a star-studded group of drivers plan to contend for the national tour’s $100,000 championship.

Who from the list of seasoned veterans, improving drivers and promising rookies will emerge from the title battle will be determined by a long season that won’t wrap up until November’s World of Outlaws World Finals at The Dirt Track at Charlotte, but they’ll all look to get their seasons off to a strong start when the series launches with seven events in Georgia and Florida between Feb. 6 and Feb. 21.

Drivers who have announced intentions of following the WoO LMS this season include:

* Darrell Lanigan. Fresh off a record-setting 2014 campaign that saw the 44-year-old Union, Ky., driver claim 17 WoO LMS A-Main victories and his third series championship, Lanigan enters 2015 hoping to maintain his unprecedented performance level in his new Club 29 Race Cars. Lanigan, who ended his longtime affiliation with Rocket Chassis and launched his own chassis brand in 2014, will have some adjustments to make this season, however, with his race team expanding to a two-car program and crew chief Jason Jameson being promoted to driver of the team’s second entry. Lanigan also enters the season on the mend after suffering a hand injury during a non-series event at Arizona’s USA Raceway in January.

* Rick Eckert. After logging just the second winless season of his 10-year WoO LMS career and his first since 2007, the 2011 WoO LMS champion has regrouped and is aiming for a return to victory lane in 2015 with a completely new team. Eckert, who finished second in the final 2014 standings while filling in for Josh Richards in the Rocket Chassis house car, has joined forces with Paul Crowl and Shawn and Lisa Martin of Viper Motorsports to field MasterSbilt by Huey cars this season. The association with Viper Motorsports is a new relationship for Eckert, while Crowl provided a part-time ride that carried Eckert to numerous regional victories over the past two seasons.

* Tim McCreadie. After an up-and-down 2014 campaign, the 2006 WoO LMS champion hopes to find more consistency and return to title contention in 2015. Entering his second season back in a Rocket Chassis, McCreadie, 40, of Watertown, N.Y., welcomes back Tommy Grecco as crew chief of his Sweeteners Plus entry. Grecco, who has spent the past eight seasons with Clint Bowyer Racing, was previously head wrench for McCreadie for five years, including McCreadie’s championship season in 2006. McCreadie is coming off a third-place points finish last season that featured three WoO LMS A-Main victories.

* Morgan Bagley. With an impressive fourth-place points finish in his sophomore WoO LMS season, the 28-year-old Longview, Texas, driver hopes his third year of national touring produces his first WoO LMS victory. Bagley, who came close to the illusive breakthrough win with a pair of runner-up efforts last season, enters 2015 with just a handful of races in his new Wayman McMillan-owned Black Diamond by Club 29 equipment.

* Chub Frank. After improving from a ninth-place points finish in 2013 to a fifth-place result last year, the Bear Lake, Pa., veteran hopes to remain among the tour’s top competitors in 2015. Frank, who celebrated his 53rd birthday on Jan. 22, enters the season looking to end a five-year winless streak on the series. For the second straight year, he’ll follow the tour with fellow Bear Lake, Pa., racer Boom Briggs as his teammate.

* Eric Wells. The 2013 WoO LMS Rookie of the Year narrowly missed scoring his first top-five points finish in 2014, losing the fifth spot to Frank only after a tiebreaker. Wells, 26, of Hazard, Ky., will look to rebound from that shortcoming this season as he returns for his third WoO LMS campaign. After switching to Rocket Chassis last year, Wells has opted to return to the same Team Zero by Bloomquist machines that carried him to his first and only WoO LMS A-Main victory and the Rookie of the Year title in 2013.

* Shane Clanton. After a disappointing 2014 campaign, the Zebulon, Ga., driver hopes to bounce back in a big way in the new season. Clanton failed to win a WoO LMS A-Main for the first time since the tour was restarted in 2004 and recorded his worst points finish since 2011 in ending up seventh in the final 2014 standings. The 39-year-old veteran is hoping an offseason of hard work and refocusing will lead him and the Weldbank Energy-sponsored Capital Race Cars house car team back to victory lane and into title contention in 2015.

* Frank Heckenast Jr. After a number of promising performances during his run to the 2014 WoO LMS Rookie of the Year title, the Frankfort, Ill., driver returns looking for even better this season. Still aiming for his first series A-Main triumph, the 26-year-old Heckenast returns to the tour with Club 29 Race Cars that helped him improve during the second half of last season.

* Chase Junghans. The 22-year-old racer fell short of the Rookie of the Year title in 2014, but he displayed promise with constant improvement throughout the season and a number of impressive runs. Entering only his third full year of Late Model competition, the former open-wheel modified standout and his Shop Quik Racing team will continue their association with Clanton and Capital Race Cars as Junghans continues to adjust to the life of a national touring driver.

* Boom Briggs. Racing as a teammate to the veteran Frank, the 43-year-old Briggs struggled to build much momentum during his rookie campaign a season ago. However, improvement throughout the second half of 2014 and a switch to Longhorn Chassis have enticed the regional standout turned national traveler into another go at the WoO LMS. He’ll once again team with Frank for the venture.

* Josh Richards. The three-time WoO LMS champion from Shinnston, W.Va., finds himself in a familiar situation entering the season: having to readjust to life as a full-time Outlaw after a season away from the series. Richards, who missed most of 2012 while pursuing pavement-racing opportunities, was forced to sit out most of 2014 due to nerve issues in his hands, but he’s poised to make a quick comeback after suiting up for the final two races of the season. With a clean bill of health, the 26-year-old Richards returns to the seat of the Rocket Chassis house car in 2015 aiming to beat Lanigan in a race to become the first four-time WoO LMS champion.

* Mason Zeigler. One of the sport’s most promising up-and-coming drivers, Zeigler, 22, of Chalk Hill, Pa., will attempt to parlay his breakout 2014 season into a successful WoO LMS rookie campaign in 2015. Zeigler displayed multiple flashes of brilliance during his nine WoO LMS appearances last season, including seven A-Main starts that produced one top-five finish and a pair of top 10s. One of his most impressive performances came at Fairbury (Ill.) American Legion Speedway’s Prairie Dirt Classic, where Zeigler won his heat race and finished third in the $25,000-to-win event.

* Jason Jameson. After earning the 2014 WoO LMS Crew Chief of the Year Award for his efforts in helping Darrell Lanigan claim series title, the 29-year-old Jameson has traded in his tool box for a steering wheel. Jameson of Lawrenceburg, Ind., will field a second Lanigan Autosports Club 29 entry in 2015 as he chases the WoO LMS Rookie of the Year Award. A regional Late Model competitor since 2006, Jameson competed when not on the road with Lanigan last season and managed to record one of his best seasons even in limited action.

* Jordan Yaggy . A graduate of the Upper Midwest’s WISSOTA Late Model division, the Rochester, Minn., driver is considering tackling the WoO LMS in just his second full season of Super Late Model competition. Yaggy, 23, got a good taste of the tour’s competition level from the six WoO LMS events he entered in 2014, and he proved he’s capable of mixing it up with the tour regulars in making all six A-Mains. He won two heat races and earned one fast time award. With backing from Arnie Ranta Motorsports for his Rocket Chassis entry, Yaggy plans to evaluate his performance at Screven, Ocala and Volusia before committing to a full-time run with the series.

The 2015 World of Outlaws Late Model Series season gets under way Feb. 6-7 at Screven Motor Speedway in Sylvania, Ga., with two WoO LMS events during the Winter Freeze. Both events feature complete WoO LMS programs of time trials, heat races, last-chance races and $10,000-to-win A-Mains. More information about the Winter Freeze is available online at www.screvenmotorsports.com or by calling the track at 912-857-4884.

After Screven, action moves to Bubba Raceway Park in Ocala, Fla., for the Bubba Army Winter Nationals. The three-race event kicks off with a $5,000-to-win DIRTcar UMP-sanctioned race on Feb. 13, followed by back-to-back $10,000-to-win WoO LMS programs Feb. 14-15. Advance-sale tickets for the Bubba Army Dirt Late Model Winter Nationals are available on-line at www.bubbaracewaypark.com or by calling the track office at 352-622-9400.

The February WoO LMS action wraps up with three events during the weeklong DIRTcar Nationals at Volusia Speedway Park in Barberville, Fla. Three DIRTcar UMP-sanctioned programs will be contested Feb. 16-18 ahead of the three WoO LMS races Feb. 19-21. More information on the DIRTcar Nationals, including details on advance ticket packages and the ‘FREE Fan Pit Pass With Every Ticket’ promotion, can be obtained by visiting www.DIRTcarNationals.com.