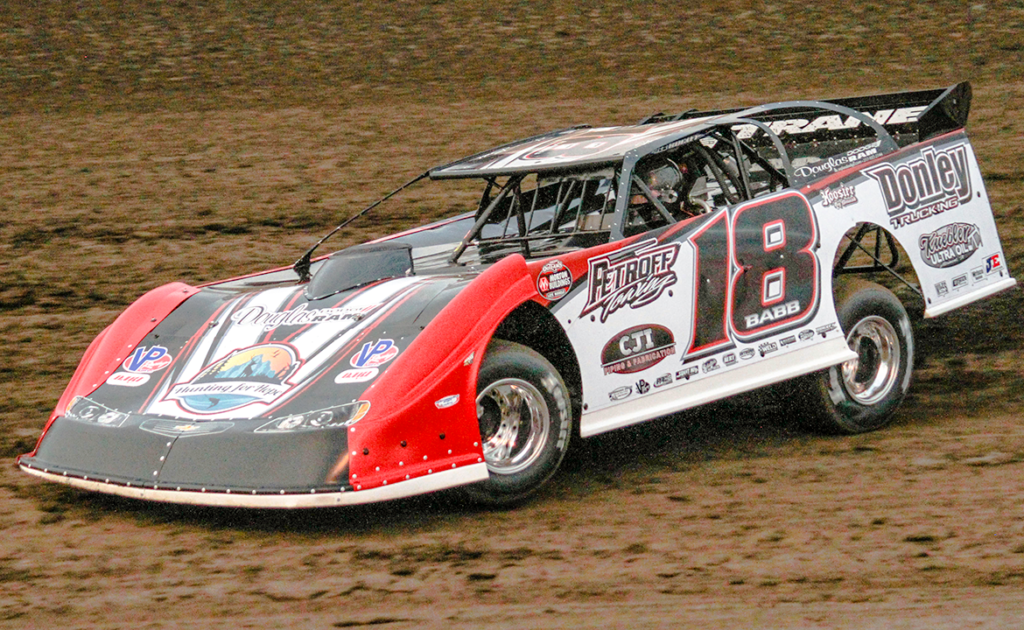 In 2020, the four-time Summer Nationals champion is prepared to usher in the next chapter of his storied racing career behind the wheel of a brand-new Team Zero Race Cars chassis built in-part by his longtime friend and competitor Scott Bloomquist. In Babb’s mind, the move is all about being the best he can be at his age.

“I’m running out of racing seasons in my life,” Babb admitted without hesitation. “I wanted to be a part of the team. I wanted to feel like everything I was doing was 100 percent the best that I could be. To be the best that I can be, I’ve got to have everybody on my side.”

Babb’s maintained a great racing relationship with the 2004 World of Outlaws champ over the past few decades, and the respect they have for one another has now given them the opportunity to connect at a more technical level and share their knowledge and data to be put towards a common goal.

This Friday night at 7 p.m. ET on DIRTVision, watch Babb and Bloomquist star in an all-Illinois episode of the DIRTVision Late Model Watch Party presented by Morton Buildings, featuring classic victories by Bloomquist at the Illinois State Fairgrounds Mile and Babb at Farmer City Raceway. The two, along with Justin Allgaier and Jason Feger, join Dillon Welch in the DIRTVision studio to provide commentary on those big moments of their careers.

“We’ve raced together for a lot of years,” Babb said. “He’s an awesome sportsman, and he’s always been there for me if I need to bounce an idea off of him or something. I’ve always had a ton of respect for him and the cars that he builds and what he does.”

Since the upstart of the Moweaqua, IL-veteran’s career in the 1990s, Babb has been seen piloting a number of different Dirt Late Model chassis over the years including MasterSBilt, Victory Circle, Rayburn, and most recently, Rocket Chassis. He’s won many races in each, but after getting a taste of what Team Zero had to offer in his brief stint as part of the Scott Bloomquist Racing stable last year, Babb’s convinced this is what he needs to carry his career in the seat as far is it can possibly go.

“I’ve been in several cars, and they’re all really good,” said Babb, who credits longtime sponsor Ed Petroff as one of his connections to Bloomquist. “I believe that it’s just like going shopping for a new rifle to go hunting — every one of those is going to fit somebody differently.

“As an individual, I’ve had the great opportunity to be able to work with each manufacturer, and I’m excited to think that [the Team Zero chassis] is going to be a really good fit for me. More hands-on, a little more information… just the fundamentals and the blueprint of the car is what I’m looking for.”

Babb was originally scheduled to substitute for Bloomquist last year at Eldora Speedway’s Dirt Late Model Dream as Bloomquist was recovering from injuries sustained in a motorcycle accident. However, Bloomquist showed up ready to compete that weekend, and the team decided to run two cars.

Babb took a lot from that experience, saying it was “a real eye-opener,” and learned a lot about how truly disciplined Scott is with his cars and how many answers he had to Babb’s questions. Although Babb wished he had more time to prepare for the event, he did come away with a solid last-to-11th-place charge in Saturday night’s main event, noting how comfortable he felt in the car all weekend long.

“Everything that [Bloomquist] builds has got a reason, it’s just totally different than anything I’ve ever been in,” Babb said. “But, the comfort of it… I could just close my eyes and just go around the racetrack with zero effort. It was what I was looking for.”

Babb reflects back to a time that he considered to be some of the best years in his career – 2005, 2006, 2007 – where he won two Summer Nationals championships, the Prairie Dirt Classic, the Dirt Track World Championship and the Dixie Shootout. All accomplished under the Rayburn Race Cars banner. Fast forward several years later, and those accomplishments are getting harder and harder to come by.

A highlight in Babb’s 2019 season came at the Highland Speedway on the Summer Nationals tour back on June 29, in his Rocket XR1, where he passed the Rocket Chassis house car driver Brandon Sheppard for the lead in the early going and held on for the win. So, there’s no hiding Babb’s versatility in driving different cars.

“When I was part of Rayburn Race Cars, we had great success,” Babb said. “We were able to work closely with [CJ], and those cars were way off from what they are today, so they have all evolved. But at the time, it was right.

“Same way with the Rocket Chassis. There’s no doubt that they are proven, and they run great. But for me, right now, I’m running out of racing seasons, and this is something I’ve always wanted to do.”

All things considered, Babb’s simply ready to get the season underway, now with some of the best technical support available in the Dirt Late Model world in his corner. At 46 years old, he’s thankful for every opportunity his fruitful career has afforded him, and will certainly strive to make the most of this new one aboard Team Zero.

“To have an opportunity to work close with Scott and Team Zero — he’s given me the opportunity, he’s not opening his door to just anyone,” Babb said. “So, for him to open his door and let me in, it means a ton to me.”