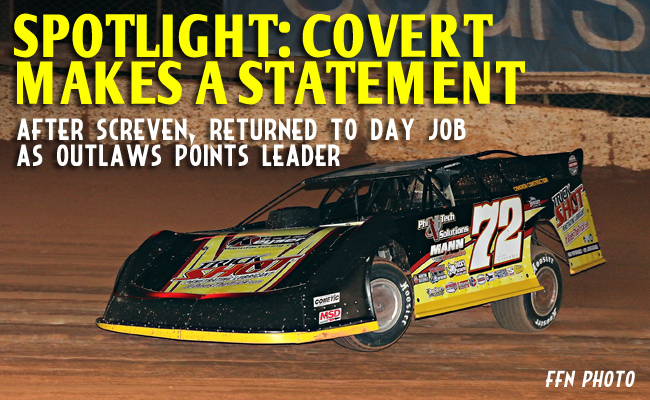 Jason Covert Makes a Statement with the Outlaws

CONCORD, NC – Feb. 26, 2016 – Jason Covert is not as well known as many of the drivers he competed against during the opening weekend of World of Outlaws Craftsman® Late Model Series action at Screven (Ga.) Motor Speedway, but none of that mattered as the Pennsylvania-native left Georgia two weeks ago with the series points lead.

It was a testament to Covert’s experience and skill as a driver as well as the competition the full-time series drivers face every night.

A native of Orbisonia, Pa., Covert began racing in 1987 after his father purchased him a 1977 Ford Pinto for $75 on his 16th birthday. Driving the Pinto, Covert competed in a four cylinder mini-stock series at Hill Valley Speedway and Path Valley Speedway for 10 years, winning two track championships at Path Valley.

“I only ever dreamed of racing,” the 29-year-racing veteran said. “I just really wanted to race. I have hip and joint issues so I couldn’t do the stick and ball sports, so when I was able to go racing it quenched my competitive thirst.”

Following his stint in the mini-stock series, Covert graduated to a limited late model and ran at nearby Silver Springs Speedway. During the five years he drove in the series, Covert captured a track championship to go along with his two previous titles before stepping up to the super late model series in 2002.

Competing in a super late model, Covert has experienced an abundance of success. Since 2006, he has finished either first or second in the standings of each regional touring series he has competed in.

“That consistency is a credit to the teams,” Covert said. “I have been fortunate to drive for great teams.

“We decided over the winter break that we were going to run Screven with the World of Outlaws. We went to Rocket to get a new car and got one a week before going to Screven, then got the motor in and went down.”

Covert owns an IT services/telecommunication business called Phi Tech Solutions that manages the IT infrastructure and phone systems of seven nuclear power plants in Pennsylvania, New York, New Jersey and Maryland when he is not competing in late model races on the weekend. His crew members also have day jobs, so following a national touring series was never an easy decision to make.

After arriving at Screven and taking some practice laps, Covert felt like his team had hit on something and that they were going to be a contender on opening weekend. Covert also had help from one of the series’ best.

“Josh Richards was helping me out,” Covert said. “I would say that is a pretty good guy to have on your side.

“We time trialed fastest on Friday night and that was surprising because I usually race better than I time trial. Our pill draws were fantastic that weekend too. We drew second and third, so I think I used up all of my pill draw luck for the year. Usually I’m a seventh or eighth guy back home.”

Covert kicked off the weekend at Screven in his Trick Shot/Cameron Construction No. 72 by leading a majority of the opening laps on Friday night before Shane Clanton made a daring move to the outside of both Covert and Richards for the lead. Covert finished the event in the fifth position.

The following night the Pennsylvania driver was third overall in qualifying and finished second in his heat, placing him in the redraw for the feature event. Covert drew the third starting position, but before the race started the pole-sitter withdrew due to mechanical issues, sliding Covert to the front row.

“Saturday night we were ok,” Covert said. “Billy Moyer Jr. was really good in our heat race. We drew good for the feature, then the pole sitter broke before we ever got going and that moved me up to first. I knew the bottom wasn’t going to be good. At the beginning of the race we were decent but just wanted to ride a little bit because I knew we weren’t going to have tires left at the end.

“(Chris Ferguson) was out there driving really hard. I’ve raced with Rick (Eckert) a long time, and if you watched us we were just kind of pacing. When Rick started backing up to me, I started backing up because I knew there had to be a reason.

“The longer I went in the race, I just kept getting tighter and tighter and then I started skating the car. I kept looking for two to go, I looked for probably 10 laps. I knew at halfway I didn’t have any tires left, then I saw Fergy blow a tire and knew we weren’t going to make it, but we did.”

Covert finished in the third position Saturday night, giving him two top five’s on the opening weekend of World of Outlaws competition. Covert sat firmly at the top of the point’s standings, leading series champions Richards, Clanton and Eckert.

“I would say the overall weekend racing with the Outlaws – with Josh and Shane on Friday night at that speed and Rick Saturday – was fantastic,” Covert said. “I would’ve rather won, but to race at that pace was awesome. Those guys drive hard every lap whether their car is good or bad and in order to race with them you better do the same.”

Covert knew from the beginning that he and his crew would not be able to make the trip to the 45th Annual DIRTcar Nationals at Volusia Speedway Park the following week, but with the series points lead in hand many believed the driver would change his mind. Instead, the driver and his team headed north back to their day jobs, handing the points lead over.

“We sat down about two months ago and decided we couldn’t make it to Volusia,” Covert said. “I would’ve loved to run at Volusia, plus it’s warm there when it’s 22 degrees and snowing here.

“All my guys have full-time jobs so we do this just for the passion of it. Would we like to run the full deal and has it always been a dream? Sure. But at my age you kind of have to have a little bit of a reality check. I had a friend tell me years ago that you could race for a living depending on what kind of living you want to have, and I really took that to heart. So that’s why I continue to work in the IT industry.”

At the conclusion of the DIRTcar Nationals, Covert had slipped to 43rd in the point’s standings, trailing Richards by 442 points.

Day jobs and a large point deficit will not stop Covert and his team from making the trip to other World of Outlaws races. The driver has planned out a handful of other events he hopes to make in the coming months.

“We plan on racing with the Outlaws as much as we can,” Covert said. “Probably Fayetteville (N.C.) will be our next race. I haven’t looked at the Farmer City (Douglas Dodge Ram Trucks Illini 100) race yet, so maybe we can do that one too. Moler (Raceway Park) and Tyler County (Speedway) are on our list too as well as Delaware (International Speedway), Potomac (Speedway) and Winchester (Speedway) at the end of the year. We may do Weedsport (Speedway), Lernerville (Speedway), Selinsgrove (Speedway) and the World Finals at Charlotte.

“We are going to do what we can and I am looking forward to it. It all depends on work schedules and my crew guys. We really enjoy the Outlaws. The way they race, I just like the style. I like the format where you earn what you get. Hopefully I can keep getting better. A third and a fifth were good but we weren’t at Shane’s speed Friday and Rick’s Saturday.”

With the series taking a short hiatus until the next event at the end of March, most drivers will take a short vacation from racing before gearing up for the Douglas Dodge Ram Trucks Illini 100 at Farmer City Raceway March 31 to April 2.

Covert will continue to work his day job and try to race on the weekends when he can. His wife Jaynelle and daughters Brittany and Allison are firm supporters of his racing dreams. Covert has one final dream to accomplish and he hopes this is the year he will do it.

“It’s very important to me to win an Outlaws race,” Covert said. “Screven we may not have won but it was a win for the team. Just how hard they worked to get the car ready, and get it underneath me where I knew how it was going to be. We may not have got first place, but my team won and it’s a team effort.

“My wife understands me racing and she has been very supportive of me. She understands my passion for racing. I will leave Friday and Saturday and race majority of the weekend, so she takes care of the house and our youngest daughter. I am very fortunate and blessed to be able to live a little bit of my dream.”