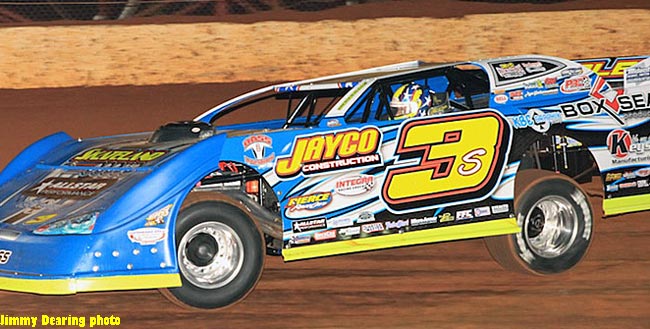 Contending for victory in the sport’s richest and most prestigious races is the stated goal for the defending DIRTcar UMP Summer Nationals and weekly series Late Model champion, who will get his first shot this season at a mega-money triumph when the World of Outlaws Late Model Series Illini 100 is contested for the fifth time on April 5-6 at Farmer City Raceway.

“We really want to focus on our program for the big shows this year,” said Shirley, a 32-year-old standout from Chatham, Ill., whose biggest career win to date was a $35,000 score in the 2006 Knoxville (Iowa) Late Model Nationals. “Last year we started up front in a lot of big races but couldn’t stay there. This year we have to make the right decisions to capitalize on those good starting spots and get solid finishes – and maybe even win one or two.

“Hopefully we can get things started right with the Illini. I’d love to be the guy to bring home a win for all the fans (at Farmer City) who are rooting for one of us Illinois boys to win it one of these years.”

No driver hailing from the Land of Lincoln has ever claimed the $20,000 first-place check for the Illini 100, the longest-running high-dollar, extra-distance dirt Late Model event in the state of Illinois. Coming off the best season of his decade-old dirt Late Model career, Shirley believes he can be the home-grown racer to make history at the quarter-mile oval.

“It would be something to hold your head high about,” said Shirley, who celebrated his 32nd birthday on Tuesday with his wife and two daughters (age five and one) at his home about 75 miles southwest of Farmer City. “I think our team’s definitely capable of doing it. You don’t want to go into any race overconfident, but you gotta be confident that your stuff’s good enough to win.

“We just gotta get over there and see how things line up. After practice on Thursday and qualifying on Friday the cards will start falling where they fall to tell us how good we are, but I feel pretty good that we’ll have something for ’em.”

Shirley struggled in the first three editions of the Illini 100, finishing 19th in 2008, failing to qualify in ’09 and placing 18th in ’10. Last year, however, the young star was a force to be reckoned with, turning the sixth-fastest qualifying lap among 53 entrants, winning a heat race and finishing a career-best seventh in the 100-lapper.

The problem Shirley had with his 2012 Illini performance, though, was that he started from the pole position and ran second for the race’s first 22 laps before fading from serious contention. He let a golden opportunity slip through his fingers.

“Last year was definitely our best Illini run but we know it could’ve been better,” said Shirley, who owns one career WoO LMS victory, in 2007 at Lincoln (Ill.) Speedway. “We felt good at first, but we didn’t maintain it. We had the right tires on, but it was one of them deals with the way the car was set up. It was real good early but it kind of just faded away toward the end.

“I think what happened to us last year is something we can correct. When we ran that race it was the start of only our second year in a Pierce car so we still had a lot to learn about them, and I feel like since then we’ve learned a lot about how to make the car good for the whole race. As the (2012) season went on and we ran more big (extra-distance) shows, I think we learned more about how to finish off the night so we can be up there in the mix at the end of a race like the Illini.”

Regardless of his fate in the event, Shirley expects the Illini 100 to live up to its reputation for close-quarters, bullring racing and dramatic, down-to-the-wire finishes.

“I know a 100-lap race (at Farmer City) is always exciting,” said Shirley, who has made only three starts so far this season but already has a victory under his belt, on March 9 in the MARS DIRTcar Series Tuckassee Toilet Bowl Classic at Clarksville (Tenn.) Speedway. “It’s a great place to have the Illini. It’s been a huge success the last few years and I have no doubt it’ll be one again this year.”

The blockbuster Illini weekend features Ohlins Shocks Time Trials and heat races on Fri., April 5, and Last Chance Showdowns and the 100-lap A-Main on Sat., April 6. Also on the schedule is a 50-lap, $5,000-to-win UMP Modified show (heat races on Friday, B-Mains and A-Main on Saturday) and competition for Farmer City’s weekly support classes. The DIRTcar UMP Street Stocks and Hornets will run complete programs on Friday, and the Street Stocks will return on Saturday to battle in another regular racing card.

An open practice session will be held on Thursday evening, April 4, beginning at 6 o’clock. Gates will open at 4 p.m.

On-line and phone ticket sales for reserved seat Illini 100 weekend ticket packages concluded at 5 p.m. ET on Wed., April 3. All remaining tickets are general admission and sold only at the track.

Advance-sale ticket packages purchased in recent days will be held for pick-up at the track’s Will-Call window, which will open at 5 p.m. on Thursday and 11:30 a.m. on Friday and Saturday.

Pit passes will be $25 for Thursday’s practice night, but Thursday’s pit admission can be included in an $85 three-day band ($5 discount for DIRTcar UMP members).