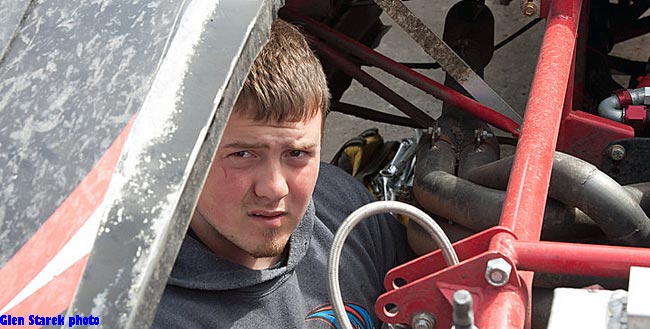 The rising young star – and the dirt Late Model world – is ready to find out.

Sheppard, 19, of New Berlin, Ill., was hired on Monday to drive the Rocket Chassis house car, giving him a golden opportunity to make his mark on the national scene in a high-profile ride that Richards recently vacated to pursue a NASCAR career.

Rocket Chassis co-owner Mark Richards, whose race team reached championship heights on the World of Outlaws Late Model Series during his son Josh’s seven-plus-year fulltime stint behind the wheel, decided to offer the ride to Sheppard after initially giving WoO LMS veteran Tim Fuller a three-race try-out. Richards sat out last weekend’s World of Outlaws doubleheader, marking just the second and third tour events since 2004 in which he did not enter at least one car.

Sheppard is scheduled to make his debut in Richards’s familiar No. 1 machine the weekend of May 18-19 at tracks near the Rocket shop in Shinnston, W.Va. His first WoO LMS starts with the team are planned for May 25 at Wayne County Speedway in Orrville, Ohio, and the $25,000-to-win ‘Jackpot 100’ on May 26 at Tyler County Speedway in Middlebourne, W.Va.

“I couldn’t get a better opportunity than this,” said Sheppard, who ran the first seven events of the 2012 WoO LMS season in family-owned equipment before skipping the tour’s four most recent races in the Southeast. “Mark definitely has one of the top teams out there. I’m really excited about having the chance to drive his car, and I hope that when I get in it I can keep impressing Mark and we can make something happen out of the deal.”

According to Richards, his pairing with Sheppard is currently set to run through the DIRTcar UMP-sanctioned ‘Dream’ on June 8-9 at Eldora Speedway in Rossburg, Ohio. But he’s hopeful that the up-and-coming Midwesterner will mesh well with his team and sponsorship can be arranged to keep them running a special-event schedule together for the remainder of the campaign.

“He’s coming to our shop next week to work on the cars with us,” Richards said of Sheppard. “I just told him, ‘Come on out. I don’t know when you’re gonna be going home…we’ll go racing and figure it out from there.'”

Sheppard, of course, has no reservations about leaving Illinois for an undetermined period of time. The son of DIRTcar UMP Late Model veteran Steve Sheppard Jr., he has been eyeing a career on dirt since running his first race in the division as a 14-year-old in 2007 and has only increased his focus since graduating high school last year. His grandfather, Steve Sheppard Sr., told him that he would enthusiastically back his efforts for a few years to give him every opportunity to someday race for a living – and lo and behold, B-Shep has already gotten his big break.

“My Grandpa is definitely real happy with me getting this opportunity,” said Sheppard, who is coming off a breakout 2011 season that saw him win the Northern All-Stars Late Model Series championship and put up a double-figure feature win total (including two DIRTcar Summer Nationals triumphs). “We didn’t have a doubt that if I worked hard and did the right things it would happen someday, but we didn’t expect an opportunity like this to happen so soon. Now I just have to make the most of it.”

Richards, who, before installing his son as his fulltime chauffeur in 2005, enjoyed success with such talented drivers as Steve Francis, Bart Hartman, Davey Johnson and Tim Hitt, is very high on Sheppard’s potential. The teenager has turned heads with his steady improvement on the regional level as well as several impressive performances in major events, including qualifying for last year’s DIRTcar UMP-sanctioned World 100 in just his second career visit to Eldora.

“Brandon’s run good for a young guy,” said Richards, who sees some of his son’s driving characteristics in Sheppard. “I think he’s an up-and-coming driver. He’s really working hard to try and make it, and that’s a big plus right now – a guy that’s young and wanting to try and move up and better himself.

“The biggest thing I see is that being a young guy, he’ll have confidence in the car and the crew and what decisions are being made. Josh was always like that in his younger days – he pulled on the racetrack with confidence. Today, that’s what you need in a driver.”

Sheppard should also be buoyed by the fact that he already has some laps behind the wheel of a Rocket house car and his hiring has a stamp of approval from the 24-year-old Josh Richards, a two-time WoO LMS champion (and the tour’s winningest driver since ’04) who made his NASCAR Nationwide Series debut last Saturday at Talladega SuperSpeedway (he finished 30th).

“Josh would go along with whoever we put in the car, but he was really big on Brandon from the beginning,” said Richards, who received more than 40 phone calls from drivers expressing interest in his team’s open seat since Josh announced his decision to move south. “Actually, when Josh was looking at the (NASCAR Camping World) Truck deal (after the 2011 season), Brandon was one of the candidates (to replace Josh) that we talked about.

“Brandon has even been in Josh’s car already. Back at the beginning of February, before (the WoO LMS season opener) at Screven, we practiced at Volusia (Speedway Park in Barberville, Fla.) and Brandon took Josh’s car out for a few laps.”

“It’s definitely a big confidence booster to already be familiar with the Rocket guys and have Josh behind you,” said Sheppard. “When we went out there (to the Rocket shop) and built our new car (for the 2012 season), Josh talked to me a bunch and we became pretty good friends. Same with Matt (Barnes), their crew chief. We got a pretty good relationship going, and then we parked by them at Volusia (during February’s UNOH DIRTcar Nationals presented by Summit) and they were more than happy to come help on my car anytime. We really communicated pretty good.”

Sheppard, who scored a career-best WoO LMS finish of eighth on Feb. 17 at Bubba Raceway Park in Ocala, Fla., is hopeful that results and sponsorship (Petroff Towing is currently providing backing to assist the Rocket/Sheppard combination) will extend his run in the house car through the end of 2012 and beyond.

“Hopefully I can get in the Rocket car and carry on the tradition,” said Sheppard, whose tentative upcoming schedule includes an American Late Model Series event on May 27 at Eldora, the WoO LMS event on May 31 at Delaware International Speedway in Delmar and at least two of the first four dates on the Appalachian Mountain Speedweek.

Since Sheppard dropped off the WoO LMS after the March 31 ‘Illini 100’ at Farmer City (Ill.) Raceway – he had considered running the tour fulltime as a Rookie of the Year contender but ultimately decided his family’s team was not yet ready for the challenge – and thus is no longer in points contention, Richards is uncertain how many World of Outlaws events he would enter with Sheppard if they continue their relationship past the Dream. But Richards’s big blue hauler would undoubtedly still make plenty of appearances in WoO LMS pit areas.

Perhaps Richards might even take Sheppard down a similar road that ultimately proved so successful for his son, running a partial WoO LMS schedule this season in preparation for a full assault, including a run at Rookie of the Year, in 2013. Josh Richards, of course, competed in 23 WoO LMS events as a 16-year-old in 2004, then went fulltime in ’05 (winning his first-ever A-Main and Rookie of the Year) and never looked back.

The next action for the WoO LMS is a Memorial Day weekend tripleheader that includes 50-lap, $10,000-to-win events on May 25 at Wayne County and May 27 at I-77 Raceway Park in Ripley, W.Va., as well as the inaugural Bullring Bonanza ‘Jackpot 100’ at Tyler County.