Sheppard Goes Back to Back at Volusia 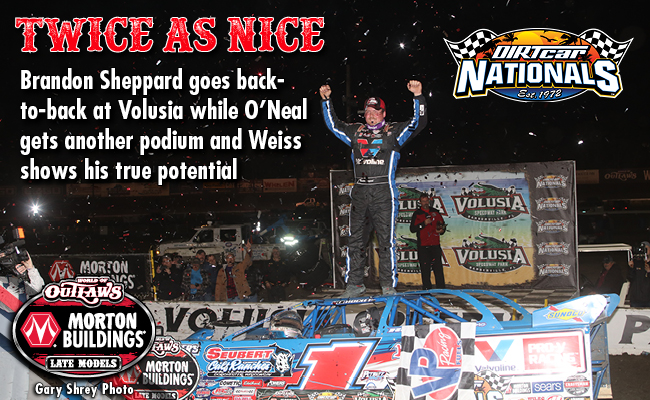 BARBERVILLE, FL – The World of Outlaws Morton Buildings Late Model Series had a streak going of three different winners in three races after Wednesday night. Brandon Sheppard’s back-to-back win on Thursday night over Scott Bloomquist, Don O’Neal and Rookie of the Year contender Ricky Weiss changed all that, as he led 39 laps on his way to victory on Night 4 of Late Model Week at Volusia Speedway Park as part of the 48th Annual DIRTcar Nationals.

Early on, the gloves were off in the battle for the lead between two former Series Champions, Tim McCreadie and Sheppard himself. McCreadie started outside front row and bolted out to the early lead. Sheppard gave chase for 10 laps before using the shortest line around the track to power by on the inside coming out of turn two. Once he grabbed the lead, Sheppard did everything he could to protect it, growing his lead in traffic to as high as 4.2 seconds at one point.

“I kind of bided my time a little bit there at the beginning and was able to find out what line I needed to run,” Sheppard said. “When I was running third, I was kind of taking my time, trying to be patient a little bit and see where I could pass them guys clean.”

Despite a number of cautions near the end of the race, Sheppard was able to handle the pressure from numerous drivers applying it from behind him. Seven different cars took a shot at the top three in the second half of the race, and the battle ensued quickly after Sheppard grabbed the lead from McCreadie. Don O’Neal, Chris Madden, Jonathan Davenport, Scott Bloomquist, Brian Shirley and Ricky Weiss were all fighting like dogs to break into the podium in various points over 50 laps, which most everyone was able to claim at least once in that timeframe.

“T-Mac” defended the runner-up spot early before Madden, Shirley, Bloomquist and O’Neal came in hot pursuit. After a restart on lap 17 that bunched the field together, they raced lap-after-lap, inside and outside, swapping positions back-and-forth for about 15 laps before another caution broke the tension. After the restart, Davenport completed his vicious charge to the front with a pass for second but quickly lost it and began to fade, much like Shirley did around the same time.

This left room for one of the best battles for the podium the fans had been treated to all week between Bloomquist, McCreadie, Madden and O’Neal. “Black Sunshine” stayed relatively out of the way, biding his time in sixth for much of the first 40 laps, but cranked things up with ten-to-go and passed three cars in three laps, leaving him with a solid runner-up finish. This gave Bloomquist his second top-five of the week, and another strong run from Team Zero, rebounding from his superb, yet unfortunate-ending run in Wednesday night’s Morton Buildings Feature (2nd to 22nd).

McCreadie and Madden held their own battle for the fifth spot near the race’s end, with McCreadie in the position as they took the checkered. This gave Madden his fourth top-10 of the season, bringing him up to fifth in Series point standings.

Don O’Neal had another terrific run aboard the Clint Bowyer Racing ride, fending off numerous challenges from McCreadie, Bloomquist and Madden just to protect his third spot. From lap 13 onward, “The Real Deal” was never worse than fourth, showcasing his integrity on the high-line, right where he was the night prior. However, O’Neal said his car may have had more in the tank for a better push for second.

“I think I ran so hard on the top, at the beginning that I used my stuff up,” O”Neal said. “At the end, I couldn’t cut across the middle like Scott and Brandon could. I had to live on the cushion. I came home third – it’s not what we wanted but it’s what we’ll have to take.”

Coming into the 2019 season, there was much speculation around the Late Model community, concerning who the “top rookies” of the World of Outlaws Morton Buildings Late Model Series were going to be. Ricky Weiss was a frequently mentioned name online, being a five-time WISSOTA Late Models champion, especially on social media. Thursday night’s race was the first to support his fans’ predictions of high-quality finishes throughout the season, as Weiss wrapped up the fourth spot, and it looks as though he’ll only be getting better from here.

A few rough finishes at Volusia prior to Thursday night has given Weiss and the rest of his crew a big reason to work hard and get better in all areas. It takes a special team effort to rebound from a 24th-place finish, directly following with a top-five effort. With Scott Bloomquist and his team’s knowledge and equipment backing the Headingly, Manitoba, Canada, team this season, Weiss has proven he’s got what it takes to hang with the big guns on a national tour.

“It’s been huge, just growing our relationship with Scott and I and our team,” Weiss said. “We’ve just been tweaking and building as a team, and it’s definitely showing.”

Weiss and his team have had experience at Volusia in years past, but never this deep into a points commitment. They key for them will be to just stay out of trouble and focus on consistency, the wins will come soon.

“We knew Florida would be a new deal to us,” Weiss said. “If we could get out of here unscathed with our equipment in one piece, I just think if we can contend, not only with the rookie deal but run up front almost every night, we can hopefully make a run for the championship.

“Our team definitely proved that we’ve got the speed and we’ve got the skill, Weiss continued. “Now if we get a little bit of luck on our side, maybe we can start picking up some wins.”

Late Model Week at the 48th Annual DIRTcar Nationals at Volusia Speedway Park continues tonight in round #3 of World of Outlaws competition. Get your tickets here or log on to DIRTVision to get your Late Model Fast Pass now for only $39 per month and watch every lap live, all season long!