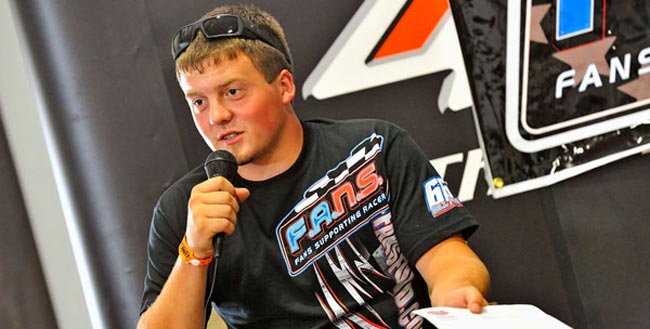 Perhaps the end result that evening wasn’t what Sheppard had hoped for (he fell back immediately and finished two laps down in 21st place), but winning a heat race and starting from the front row in a World of Outlaws event certainly represented a breakthrough outing for the third-generation racer from New Berlin, Ill.

And thus, when Sheppard returns to Volusia to compete in the dirt Late Model portion of the 41st UNOH DIRTcar Nationals Presented by Summit from Feb. 20-25, he’ll be secure in the knowledge that he can make some noise against the country’s best drivers.

“That was definitely a huge confidence builder for me,” said Sheppard, who took time off from his senior year of high school to enter last year’s UNOH DIRTcar Nationals Presented by Summit. “It’s pretty nerve-racking to start a World of Outlaws feature on the pole for the first time, but I’m glad we got to do it. It was a pretty big moment in my career, something I’ll never forget.

“We kind of messed up on tires a little, which was disappointing. We went too hard (on compound choice), and right from the start I knew we were in trouble because the track (surface) didn’t blow off as much as I thought it would. But it was still a great night for us, and hopefully we learned some things that will help us when we go back.”

Sheppard is undeniably now a more serious contender than when he last toured the half-mile Volusia oval, which will host four nights of DIRTcar UMP-sanctioned Late Model action (Feb. 20, 21, 22 and 24) and two WoO LMS programs (Feb. 23 and 25) as part of the 12-night UNOH DIRTcar Nationals Presented by Summit. He established himself as a rising star in the division during the 2011 season.

The teenager broke through in a big way in ’11, putting up a double-figure win total – including some very notable victories – on the DIRTcar UMP circuit and capturing the Northern All-Stars Late Model Series championship.

In his fifth season of action in the country’s marquee full-fender class, Sheppard proved that he’s bound for plenty of glory in the future.

“Things really started to click for us (in 2011),” said Sheppard, whose father, Steve Sheppard Jr., was a top DIRTcar UMP Late Model contender through much of the 2000s. “After racing for a few years, I realized that what you want is to go to every track and start off decent, and then work from there. We got a lot better at that (in ’11) and it showed with our performance.”

Sheppard’s true coming-of-age moment in ’11 – and the key to his NALMS points title – came on June 4 at I-55 Raceway in Pevely, Mo. While he had already won four features during the spring, including back-to-back NALMS events on May 27 at Lincoln (Ill.) Speedway and May 30 at Macon (Ill.) Speedway, his victory in I-55’s Tri-State Challenge NALMS special was a milestone in his budding career. The race’s $5,000 top prize represented Sheppard’s richest triumph ever and he earned it in dominant fashion, blasting from the fifth starting spot to the lead on the opening lap and then running away to a half-lap advantage. When Sheppard took the checkered flag, he was about to lap dirt Late Model legend Billy Moyer, who happened to start ahead of Sheppard.

“The championship meant a lot to me,” said Sheppard, who registered three wins, eight top-five and 10 top-10 finishes on the ’11 NALMS and pocketed $5,000 for the points crown. “Me and the team worked real to win it, so it was a big deal for us. Hopefully it will be the first of many more championships for us.”

The NALMS success wasn’t Sheppard’s only highlight from ’11, however. He gained plenty of attention during the summer when he won a pair of DIRTcar Summer Nationals A-Mains in a five-day span, grabbing a $5,000 score on July 3 at Lincoln and backing it up with a career-best $10,000 victory on July 8 at Farmer City (Ill.) Raceway. Sheppard, who outdueled eventual Summer Nationals champion Shannon Babb of Moweaqua, Ill., for both triumphs, became the youngest driver in history to win a feature on the grueling, month-long ‘Hell Tour.’

“Those two wins probably meant the most to me this year,” said Sheppard, who entered all 22 Summer Nationals points races and finished sixth in the final standings. “To be as young as I am and already have two Summer Nationals wins – man, that’s just an incredible feeling. I mean, my dad only got to win one Summer Nationals race ever.”

Sheppard also turned heads on two of dirt Late Model racing’s biggest stages in ’11, qualifying for a pair of crown-jewel events, the WoO LMS USA Nationals at Cedar Lake Speedway in New Richmond, Wis., and the DIRTcar UMP-sanctioned World 100 at Eldora Speedway in Rossburg, Ohio. He climbed as high as third midway through the 100-lap USA Nationals before a broken fuel-pump knocked him out and finished a respectable 16th in the World 100 after starting 29th.

Now Sheppard’s challenge is to continue his rise in the dirt Late Model world. In that regard he has the full support of his father, who at 36 has stepped out of the cockpit to focus on his son’s budding career, and grandfather, who has given him the green light to concentrate on racing now that he’s out of school.

“He lives and breathes racing now,” Steve Sheppard Jr. said of his son. “Grandpa said, ‘Go for it!’ so he’s getting his chance to race for a living. Grandpa said we’ll give it a few years to see how everything goes, and if the racing doesn’t work out he can always work for the (family) business (Sheppard Car Crushing).”

The youngest Sheppard is appreciative of the situation he’s been presented: a top-notch team that in 2012 will include not only a new Rocket Chassis, but also a Roush-Yates Chevy engine. Sheppard’s grandfather decided to purchase the powerplant during Brandon’s November trip to the Lowes Foods World Finals at The Dirt Track at Charlotte in Concord, N.C.

“They’ve given me the opportunity to see if I can do it for a living, so I’m gonna take advantage of it,” said Brandon, who finished seventh in the 2011 DIRTcar UMP national points standings following a season that saw him record 28 top-five and 44 top-10 finishes in 73 starts. “I want to make everything I can out of it.”

Sheppard has been hard at work this off-season prepping his equipment, which also includes the Pierce cars and Mullins engines he campaigned in 2011. He will begin his racing schedule with WoO LMS events at Screven Motor Speedway in Sylvania, Ga. (‘Winter Freeze’ on Feb. 10-11) and Bubba Raceway Park in Ocala, Fla. (Bubba’s Army Late Model Winternationals on Feb. 16-18) before stopping at Volusia, where he will most likely debut his new Rocket machine.

“When we show up at Volusia this year we’re gonna have our program better than it’s ever been,” said Sheppard, who plans to follow the WoO LMS through the April 28 event at Tazewell (Tenn.) Speedway and then decide if his performance and sponsorship situation are strong enough to let him chase the national tour’s Rookie of the Year award. “I’m hoping we can keep improving and have some good runs.”

For more information on the UNOH DIRTcar Nationals Presented by Summit – including special pricing on advance-sale tickets and details of the ‘Free Pit Pass With Every Ticket’ offer that allows fans to get up-close-and-personal with the race teams every night of the DCN – visit www.DIRTcarNationals.com or call 704-795-7223, 386-985-4402 or 877-395-8606 (ticket hotline).

For more information on DIRTcar Racing and the WoO LMS, visit www.dirtcar.com and www.worldofoutlaws.com.